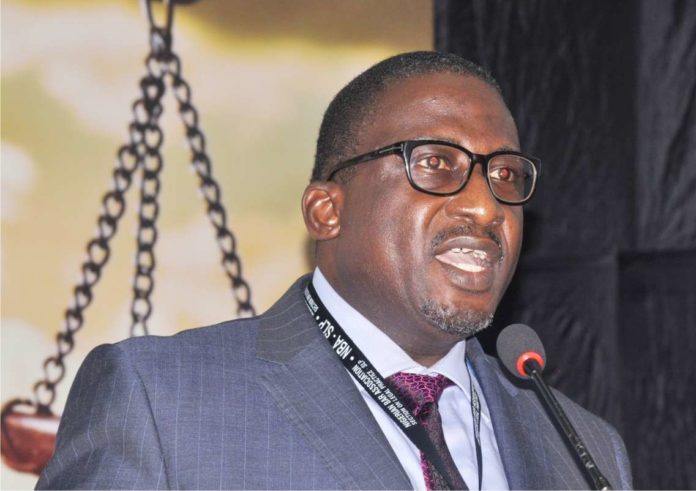 Some stakeholders have raised concerns over the Nigerian Bar Association (NBA), Lagos Branch Elections scheduled to hold on Friday.

The stakeholders told CITY LAWYER that while the integrity of the Electoral Committee is not in doubt, some of the processes leading to the high-stakes elections leave a sour taste in their mouth.

This comes against the backdrop of postponement of the highly anticipated “Manifesto Day” earlier scheduled for tomorrow to Tuesday at 1:45 pm. The postponement is not unconnected with the investiture of former Chief Judge of Lagos State, Hon. Justice Opeyemi Oke as a Fellow of the Institute of Criminology and Penology at the High Court Foyer earlier slated for the Manifesto Day.

According to some of the candidates, enlightenment on the electronic voting system is poor, moreso as the branch is deploying the e-voting system for the first time.

They also poked holes in the complaints processes for the cleaning up of the voters’ register. According to them, many eligible voters may be disenfranchised as the initial notice on omitted names did not request members to send in their Bar Practicing Fee and Branch Dues receipts.

A notice cited by CITY LAWYER as published on the election website stated that “ANY COMPLAINT REGARDING THE FINAL LIST OF ELIGIBLE VOTERS FOR THE 2019 ELECTIONS SCHEDULED TO HOLD ON FRIDAY THE 28TH OF JUNE 2019 SHOULD BE SENT BY EMAIL TO nbaelection2019@gmail.com ON OR BEFORE WEDNESDAY THE 19TH OF JUNE 2019. ELIGIBLE VOTERS SHOULD PLEASE VISIT THE NBA LAGOS BRANCH SECRETARIAT TO VERIFY THAT THEIR EMAIL ADDRESSES AND PHONE NUMBERS ARE ACCURATE.”

“Several members reached out to us on this, saying it was only after they sent in their complaints that they were directed to attach these documents,” a candidate told CITY LAWYER at the weekend. “Some potential voters are even giving up after several attempts to send in their complaints.” It was also noted that there was no feedback from the Electoral Committee to members on whether their complaints are being resolved or not.

The stakeholders also say that barely a few days to the elections, they are in the dark as to the framework being put in place by the Electoral Committee for the elections. “We are worried that the disclosure levels are rather low,” said the candidate. “We are not being carried along. There is no information on the processes. We do not know who the ICT Partner will be. The integrity of the Electoral Committee is not the issue. How do you monitor an electoral process you know nothing about?”

Another stakeholder told CITY LAWYER that the integrity of the voters’ register must not be put in doubt. His words: “It is crucial that we have in place a credible voters’ register. This is non-negotiable. There is also no official Help Desk or hotline published by the Electoral Committee for potential voters to follow-up on their complaints.

“There is no reason why the attendance list for the June Branch Meeting should not be in the public domain by now; transparency demands that. We must eschew padding of the voters’ register.

“Till date, there is also no notice on when electioneering campaigns should cease. This is important so that everyone is on the same page on the electoral guidelines. This is the first time that e-voting is being used. This entails that we must be extra careful.

“Why is the database not published on the election website or online so that members can update their details there? I know some members who are overseas as we speak. Will they not be disenfranchised by this manual approach to the complaints? Why do we then call it electronic voting if members cannot update their data online and vote from any part of the world?”

One of the candidates told CITY LAWYER that it is imperative that the Electoral Committee convenes a stakeholders’ meeting to be attended by the media to unveil its framework for the elections. “We need to have a forum to ventilate our concerns to the Electoral Committee. So far, that has not happened. That needs to happen. What will be the level of involvement of our agents in the entire electoral process? We need to be in the server room as the votes are dropping; that is an irreducible minimum. We do not want a situation where the backend is opened to rig the process.”

It is estimated that Lagos Branch has about 14,000 nominal members. However, only 793 voters are on the voters’ register published by the Electoral Committee. More names may make the list following ongoing resolution of complaints by the Electoral Committee. Members of the longstanding committee are Mr. Richard Akintunde SAN, Chairman; Chief E. A. Otokhina; Mr. Geff Eze; Mrs. Obosa Akpata and Mrs. Olusola Adegbonmire.

When CITY LAWYER contacted Akintunde on the concerns, he assured that he would respond to all the issues raised by the stakeholders.