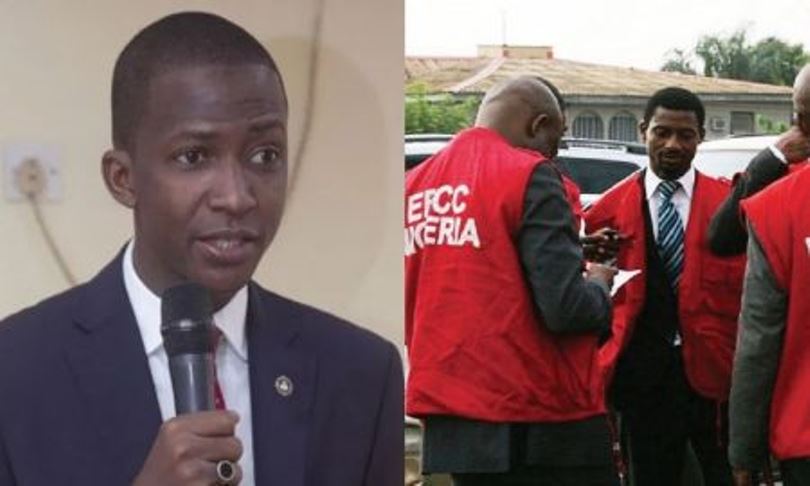 NBA TO SUE EFCC FOR ASSAULT ON LAWYER

Barring any last-minute agreement, the Nigerian Bar Association (NBA) has resolved to file at least two lawsuits against the Economic and Financial Crimes Commission (EFCC) for the alleged assault on its Makurdi Branch Chairman, Mr. Justin Gbagir.

Fiery human rights lawyer and Chairman of the NBA Human Rights Committee, Chief Mike Ozekhome SAN has been directed by NBA President, Mr. Olumide Akpata to file the main lawsuit seeking redress for the alleged assault on Gbagir by EFCC operatives at their Makurdi Office.

According to a statement made available to CITY LAWYER by the victim, “The first suit is for the assault. The NBA has briefed Chief Mike Ozekhome SAN who is the Chairman of NBA Human Rights Committee to file the suit. I have had two interviews with Chief Ozekhome SAN and lawyers in his office and I am currently putting together my documents including medical records to enable them proceed.”

Gbagir also said that he had undergone eye surgery to correct the injury inflicted on him by the EFCC operatives, adding that “I can now see clearly with the eye except the occasional pains I experience.”

On the 8/6/2021, the operatives of the EFCC assaulted me in their Makurdi Zonal office in the presence of the Benue State Attorney General and Commissioner of Justice, the Solicitor General and Permanent Secretary, Ministry of Justice, Director of Public Prosecution and other lawyers.

Today been 4 months since the assault, I wish to give an update regarding the following:
1. Engagement with the EFCC
2. Legal Actions
3. My Health Condition

1. ENGAGEMENT WITH THE EFCC

The NBA President has been engaging with the EFCC Chairman on the issue with a view to finding an amicable settlement. The EFCC Chairman has consistently maintained that since the operatives in Makurdi have denied assaulting me, there is nothing he can do.

At one of the meeting with the NBA President, the EFCC Chairman suggested that they will have to subject me, the AG, and other lawyers who were present when the assault took place to a polygraph test to determine who is telling the truth.

When the NBA President related this to me, I consulted with the AG and other lawyers who were present when the assault took place and we vehemently refused to submit to the said polygraph test.

Our reasons for the refusal were:
a) The said polygraph test is to be conducted by the same EFCC who carried the assault.

b) The same EFCC had issued a press statement on the 9/6/2021 denying that I was assaulted and alleging that I hired thugs to release suspects in their custody.

c) EFCC sent the Director of Internal Affairs who came to Makurdi to allegedly investigate the matter and took my written statement. Result of that investigation is not made available to us.

d) The EFCC Chairman who visited Makurdi on the 15/7/2021 and had interface with me and the AG clearly adopted the position of the Commission as contained in the EFCC press statement of 9/6/2021.

Our conclusion there is that the EFCC has not given us any reason to trust them but to feel that consistently, they are doing everything to support the position they took in their press statement of 9/6/2021.

We have decided therefore to approach the courts to seek redress.

We have decided in the meantime to file two suits against the EFCC with a possibility of more.

The first suit is for the assault. The NBA has briefed Chief Mike Ozekhome SAN who is the Chairman of NBA Human Rights Committee to file the suit. I have had two interviews with Chief Ozekhome SAN and lawyers in his office and I am currently putting together my documents including medical records to enable them proceed.

The second suit is for defamation of myself and the other lawyers EFCC referred to as thugs in their press statement of 9/6/2021 and the defamation contained in their press statement of 15/8/2021. The suit is been handled by a Legal Team put together by NBA Makurdi Branch headed by T.D Pepe, SAN. A letter of Demand has already been served on the EFCC. They have not responded till date. Paperwork is currently ongoing and the suit will be filled soon.

CONDITION OF MY HEALTH

I can now see clearly with the eye except the occasional pains I experience.

I wish to thank the NBA President and the entire Bar for standing by me in this travail, Chief Ozekhome SAN, T.D Pepe SAN and all the lawyers working on the cases. I also thank those who have supported me financially to foot the bills and take care of my needs during this trying period I am not productive

Thank you and God bless us all.