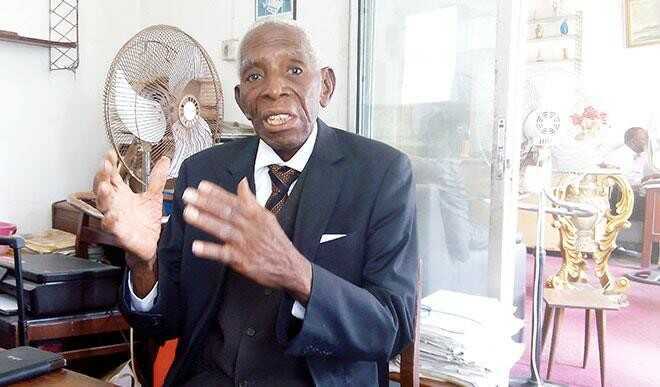 Pa Gomez died on Wednesday after a brief illness. Born in 1928, he was a firm believer in equal rights and the rule of law. He was the Leader of a vocal group that sought the abolition of the rank of senior advocate of Nigeria on the ground inter alia that the rank conferred undue privileges on the beneficiaries.

The Nigerian Bar Association (NBA) virtual chatroom was was agog with tributes as members unleashed a flurry of kind words to celebrate the life and times of the veteran Bar activist. Some lawyers also sent the tributes to CITY LAWYER.

Below are some of the tributes:
• Hon. Justice Obiora Egwuatu: May his soul rest in perfect peace. Thank God NBA Lagos Branch honoured him while he was alive. My condolences to his family and Amaka (Aneke).

• Emeka Ngige, SAN: I join the chair and entire members of NBA Lagos Branch in mourning the death of the legal icon, Pa Tunji Fortunatus Gomez. He was a consummate Bar man and the ‘conscience’ of NBA. A man of courage and conviction, he was in the forefront of the group calling for reforms in our decadent Association. The Bar will sorely miss him! May his courageous soul Rest In Perfect Peace! Amen! Adieu matter of conscience!

• Arthur Obi Okafor SAN: It is with shock that I learnt of the demise of a doyen of the bar, activist, consummate bar man and the lawyers’ lawyer(it is a matter of conscience) Pa Tunji Fortunatus Gomez who died on Tuesday, at the age of 90 years. Just last March, I joined our colleagues of the Lagos Branch and friends across the country to celebrate the 90th birthday of this courageous and dogged fighter for justice; who was a role model to us and the younger generation. Like I stated in my goodwill message at the birthday; Pa Gomez was an inspirational elder of the bar, whose genuine interest in the good of the society and key issues relating to the NBA, earned him the love and respect of people within and outside the profession. He lived a life of positive impact and contributed immensely in his own unique ways to the growth, unity and progress of our noble association. His demise at this time in the history of our association will no doubt create a vacuum in the NBA and the society. My heart goes to members of his family and the Lagos branch of the NBA where he was an active member, I pray the Almighty grants him eternal rest, as he bows out after years of meritorious service to humanity, while also giving his love ones and colleagues the fortitude to bear this irreparable loss. Adieu the Lawyers’ Lawyer. (It is a matter of conscience) for we shall deeply miss Pa Gomez.

• Prof. Ernest Ojukwu, SAN: I join our legal community to mourn the passing of Pa Tunji Gomez. Pa Gomez made tremendous impact in the Nigerian legal system. He defined his principles and lived by them. His presence on earth gave hope to so many persons in Nigeria that a fight for justice and fair play will never be in vain. Adieu Pa Gomez.

• J. S. Okutepa SAN: The legal profession has lost yet another legal icon and juggernaut Pa Tunji Gomez. The news came to me with rude shock. Not too long ago the legal community celebrated the 90th birthday of this great legal icon. Pa Gomez was a man of great courage and conviction. He was always pursuing causes he believed in within his conscience with courage. He always said it was a matter of conscience. He championed the abolition of the rank of SAN. He was always jovial but firm. Death has snatched this great legal icon from us. But I take solace in the fact that Pa Tunji Gomez lived a fulfilled life and a good old age of over 90 years. Adieu Pa Gomez.

• Chuma Ezeala: Oh our dear Pa Gomez has finally joined the great beyond! During one of his final public appearances at his birthday in March of which I had the privilege of serving as Chief Steward, he quietly told me that the Branch had made his life the best. He was full of appreciation to the Branch and to God who made the event memorable for him. I told him better ones would come and he shook his head and said he would not wait any longer. I reminded him that he was strong enough to continue the journey and that many of us admire him but he laughed. He danced and beat many ladies to it. Lo! he has finally completed his race and gone. I personally do not mourn this great soul but celebrate him. He lives! May I join the Chairman of the Premier Bar in sympathizing with his family and all of us that have lost a rare gem. His advice to me and to all who had personal contact with him remains golden. Adieu Pa Gomez.

• Ifeoma Ojemeni-Okali: Oh no! Papa Gumez, alias “It’s a Matter of Conscience” is no more. He was a jolly good fellow and a true Nigerian. We miss him but not mourn him as he lived a fulfilled life. At 90, he was still active until his last day, what a wonderful work of the Lord! We give God the glory for His mercy upon his life and pray that we live that long and in good health. To his family and close associates like our very own Amaka, l say take solace in these facts of his life and accept that he has gone to be with the Lord after accomplishing his mission on earth. May his soul rest in peace, Amen!

• Chief Chuks Ikokwu: I am saddened by the transition of a very good man. May his soul rest in peace.

• Ikechukwu Uwanna: He lived a good life and left a great legacy. He will forever be remembered. May God grant all around him the fortitude to bear this loss.

• Nnabuike Edechime: Pa Gomez lived a fulfilled life. May his soul rest in peace in paradise where there is neither inner nor outer Bar.

• Monday Ubani: The news of the departure of the conscience of the bar was received with mixed feelings. Even though Pa Gomez is old enough to die, I would have loved him to stay longer on this side of the living because of his numerous contributions to the development of the law in Nigeria, alas God desires his presence in heaven. Adieu Pa Gomez, rest in perfect peace until we meet to part no more. We shall certainly miss you on this side of the world!

• Uju Chukwuma-Okafor: It is indeed with heavy heart that we received the news of the death of Pa Tunji Gomez of Lagos Branch at 90 years. I condole with the entire NBA family and in particular members of the Lagos Branch of NBA on this huge loss. May his soul and the soul of all the faithfuls rest in peace, Amen.

• Adebola Lema: May the gentle soul of Pa. Olatunji Fortunatus Gomez rest in peace. Sleep on till we meet to part no more. The father of Aduke and Jide Gomez. The husband of Helen Gomez. The son of Mr. George Gomes and Beatrice Adesiyan Gomes. The sibling of Jide Gomez, Boopo Fadipe, Shade Gomez. The Conscience of the Lagos Bar and Nigerian Bar as a whole. He came, saw and conquered. Until his death he was the last of the Alao Aka Bashorun no-nosense-lawyer. Sun reo Pa. Gomez ‘a matter of conscience’

• Tobenna Erojikwe: My condolences to you, Mr. Chairman and to the branch. May the soul of Pa Tunde Gomez rest in peace. At his 90th birthday celebration hosted by the branch, Pa Gomez had requested that the band should play a special song for him. I pray that he ‘marches in with the saints’ as he wished on the day.
• Chuma Akana: Pa Gomez may have gone but his legacy leaves on. He epitomized what a lawyer should be: Dogged, a crusader, a champion, the voice of the voiceless, brave and courageous, fearless and intelligent.
• Adieu Sir. Indeed long after the curtains are drawn, the notes from your song will keep playing.

• Geraldine Wey: On behalf of the National Association of Catholic Lawyers Lagos (NACL) Lagos Archdiocese, I express heartfelt condolences to the Chairman and members of NBA Lagos Branch as well as the family of our Papa Gomez aka A Matter of Conscience on his demise. We all take solace in the fact that he remained consistent in his beliefs and we can all look up to him for that. I thank our Chairman for taking out time and resources to celebrate our Papa in his lifetime. I remember that day clearly…. He was so happy… He danced and danced. His request was for the band to sing: Oh when the saints go marching in … Oh Lord I want to be in their number… I felt goose flesh … I joined others to dance with him but somewhere in my heart I wondered…. Well, the clarion has sounded and I have no doubt in my mind that Papa IS in their number. Go well Papa Gomez. Sleep well. Geraldine Wey, President NACL Lagos.

• Richard Akintunde SAN: He will surely be missed. May God Almighty grant him eternal rest.

• Frank Agbedo: Pa Gomez was an enigma. He lived and gave his all for the good of mankind. Ever resolute and irrepressible in his beliefs especially on issues of human rights and bar activism. May his gentle soul rest in perfect peace.

• Tony Nwaochei: I celebrate the life and times of the irrepressible Pa Gomez, a consummate bar man and person of conscience. I will always have warm memories of the time spent with him in the last one year particularly at the last annual dinner of the branch and his 90th birthday when the Chairman and the branch so thoughtfully celebrated him. My prayer is that even as the Lord receives his soul, those of us on this side of the divide will uphold the ideals that he lived for. Rest in peace, Sir.

• Makanjuola Ogunmoroti: O death, where is thy sting, O death, where is thy victory…. Adieu Papa! I personally admire this great man who carried a rare grace of God! At his age, he does not joke with NBA meetings and must contribute meaningfully. He followed discussions and reasoned along too. What a privilege at that age!