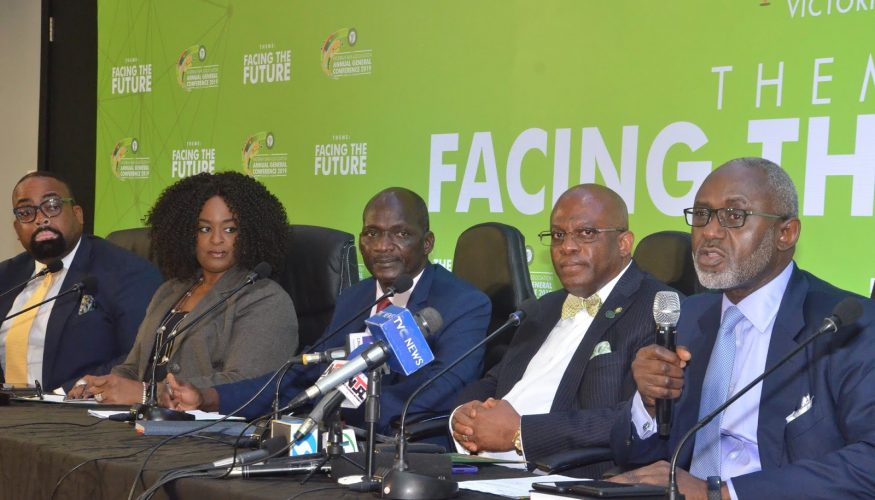 MIXED REACTIONS, AS AGC KICKS OFF

The 2019 Nigerian Bar Association (NBA) Annual General Conference (AGC) took off on a bumpy note as some delegates swore that not much has changed from the hiccups that attended past exercises. While some delegates poked holes in some aspects, others heaped praises on the organisers. Notwithstanding a late start, the opening ceremony lived up to its billing as a favourite for most delegates.

Though NBA President, Mr. Paul Usoro SAN was on ground last Friday to assure delegates that distribution of conference materials would commence at 9 am when the week-long conference was billed to take off, some delegates complained of delay in commencement of the distribution exercise.

Olalere however stated at 9: 46 am that “the materials distribution has commenced, and it’s going on smoothly now.”

Others agreed with Olalere that the distribution was without hitches. Former NBA Lagos Financial Secretary Marian Jones said: “Seamless! Impressive.” On her part, Bar-man Amaka Aneke said: “Sleek and Smooth.” NBA Lagos Branch Publicity Secretary added his voice to the praises when he said: “Distribution is still ongoing seamlessly.”

Giving an indication that the distribution exercise may have been fraught with challenges, newly appointed NBA-NEC member Bob Ijioma said: “It ain’t easy asking learned people to be orderly during registration and collection of materials at the AGC today. Thanks to all TCCP and LOC Members. We put in a great job. Thank you President Paul Usoro, SAN and My Lady Mfon Usoro.”

However, when CITY LAWYER visited the Harbour Point on Saturday, the cubicles were virtually deserted, with delegates trickling in to collect their conference materials. The cubicles were marked according to States while some States were merged.

But the aides said no notebooks were supplied contrary to the checklist, while assuring delegates that the brochure would be given to them during the technical sessions commencing today. However, a partner in one of the leading law firms whom CITY LAWYER met attempting to collect his conference materials was unable to do so as his name was not listed. He was advised to visit the nearby Secretariat to have his name tag printed to enable him collect the materials.

One of the aides also told CITY LAWYER that they had a hectic time processing delegates on Friday. This may not be unconnected with the fact that all delegates in the five branches in Lagos were repeatedly urged by the organisers to endeavor to collect their conference materials on Friday.

While the Technical Committee on Conference Planning (TCCP) had deployed many channels to publicize the AGC programme, indications emerged at the weekend that some communication gaps persisted. For instance, some members of the TCCP had to escalate posts on several whatsApp platforms to alert delegates that they need not wear wig and gown to the AGC Thanksgiving Service which held at the Cathedral Church of Christ, Marina, Lagos. Wrote Chukwuka Ikwuazom, TCCP member and former NBA Lagos Branch Chairman: “Good evening colleagues, following inquiries from members about the dress code for the Church service, we wish to clarify that members are not required to wear their wig and gown to the service. Many thanks.”

This challenge also manifested in relation to the Welcome Cocktail hosted by the Chief Judge of Lagos State, Justice Kazeem Alogba. As feelers of a change of venue filtered in, one Azeezat Omolara quipped: “So the welcome cocktail venue has been changed from City Hall to Harbour Point which is better 7pm today (sic). Any confirmation for the above?”

In fact, a delegate called CITY LAWYER to complain that he was at City Hall for the event but met the place under lock. A post had however trended earlier in the day stating that “Please be informed that the NBA Conference Cocktail venue has been moved to Harbour Point by 5pm today.”

If the change of venue caught some delegates napping, the Welcome Cocktail itself left a sour taste in the mouth of many delegates. Comparing it with similar events, Omoniyi Onabule said that “Lagos Bar does better cocktail,” adding: “Na water men de sip. I haven’t seen this in my life.”

However, Omoredia urged the delegates to move over to the Friendship Centre – which was unveiled after the welcome cocktail – to shrug off their disappointment. His words: “Friendship centre was more like it!!! Bovi is so funny.”

Held at the high-profile Eko Convention Centre of the Eko Hotel & Suites, the opening ceremony was attended by heavyweights in the legal sector including the Chief Justice of Nigeria, Justice Ibrahim Tanko Muhammad; newly re-appointed Attorney-General & Minister of Justice, Mr. Abubakar Malami; International Bar Association President, Mr. Horacio Bernardes Neto and several Bar Leaders. This was followed by a surfeit of breakout sessions.