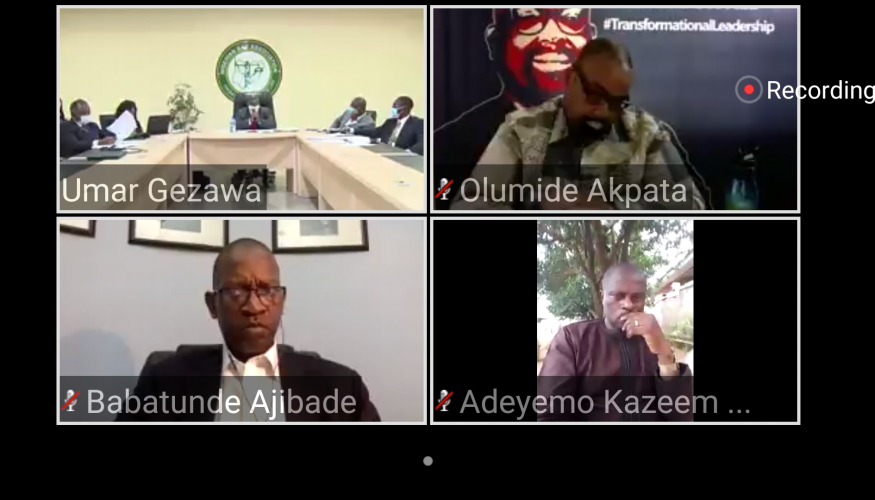 The Electoral Committee of the Nigerian Bar Association (ECNBA) today held a virtual meeting with candidates in the forthcoming NBA Elections and other stakeholders, assuring that the poll will be free, fair and credible.

Tagged “Online interactive session with all Candidates in the NBA National Officers Election 2020, Bar leaders, and Stakeholders,” the meeting was monitored by CITY LAWYER and attended by the three presidential candidates among others, even as some candidates shunned the parley.

In a 12-minute opening speech, ECNBA Chairman, Mr. Tawo Tawo SAN went down memory lane, recalling how the electoral committee conducted the compilation of voters list and the verification exercise. He stated that the committee chose the election portal in line with operational recommendations of its Information Technology Consultant, adding that the process will ensure that “all but only legitimate votes count” and that it is a “national election we can be proud of.”

Tawo thanked Bar Leaders and NBA staff for their cooperation, even as he singled out NBA President, Mr. Paul Usoro for commendation for giving the committee a free hand to conduct the election.

On the choice of IT Consultant for the election, Tawo stated that at the end of the committee’s screening exercise, “a firm which was adjudged to have the requisite experience and expertise and competent in such matters was engaged to work with ECNBA on this project as our consultants. At the time of the engagement of the consultant, the ECNBA had not taken any decision as to the platform to be used for the election, as mentioned in our statement No. 006.”

Indicting one of the presidential candidates, Mr. Olumide Akpata for what he termed “unauthorized access” to the NBA website, the electoral committee chairman said: “The committee therefore deprecates in strong terms the various attempts by individuals who in an attempt to force the hand of the ECNBA, some of who are members of the profession, to gain unauthorized access to the NBA website and going further to publish a report showing perceived weaknesses of the site to the world. This action is so sad to say, not expected of gentlemen of our noble profession.” He stated that the committee is confident of its IT Consultants and their expert advice on the technical aspects of the election.

In his remarks, former NBA President, Chief Bayo Ojo SAN warned all stakeholders that “we are in this together,” noting that having criticized the government on electoral misfeasance, “now is the time to show how to do it and do it well.” He urged the electoral committee to ensure that the election is “free, fair and credible,” adding that the candidates must exhibit the spirit of sportsmanship, as only one person can win the race.

Following several questions from some candidates, Mr. Alozie Echeonwu was invited by the electoral committee chairman to throw more light on some aspects of the election.

Said Echeonwu: “The chairman did not say that the election will be on the NBA website. The chairman has not disclosed the election protocol. The platform upon which this election will be run is considered a sensitive election item. The protocol will be released to everyone whose name is on the voters’ list and who has properly done his verification. The protocol is a do-it-yourself form of protocol and everybody’s unique credentials will be delivered to him. Each credential is unique to each voter and under no circumstance should these credentials be shared with any other person.

He stated that there would be proper voter education directed to eligible voters, emphasizing that the voting platform is “very secure; very secure. You can go to sleep. The architecture is such that you may be given access to monitor the election wherever you are; and after the elections, there will be a post-election audit. A post-election audit will expose everything for anybody who is minded to do further study on it to please go ahead.”

Stating that each voter would be availed proof of his voting, Echeonwu said: “The architecture is automated. Everybody voting can verify; in fact, when you vote, you get a certificate. Each voter will receive a certificate as to the activities he carried on. You can self-audit the process.” He assured that eligible voters will receive their credentials, voter education and details of the protocols “in good time.”

Addressing the thorny issue of voters’ list, Tawo said though the committee had published the “final voters’ list,” the ECNBA had stated that the list “was being cleaned because of the duplications. We expect to publish the clean list after the outstanding verifications, the backlog has been cleared tonight. So, that will be done.”

In his remarks, Akpata noted that he sent in over 12 questions to the electoral committee, adding that “the issue of transparent and credible election lies at the heart of every election, and it must be seen and felt by all participating in the process.”

Responding to the allegation of unauthorized access to the NBA website, Akpata said: “Obviously, that reference was to me. Mr. Chairman, access to the portal is open to all. Maybe that’s the point some of us are making. It is free to all to study. As you know, Mr. Chairman, this is the first meeting we are holding with ECNBA in this entire process – two days to the election. So, we have not had information. The only information we have had is that the portal – in fact, the infographics released (shows) that is where the election will be held. Some of us (are) concerned about that website, that portal and the fact that it appears vulnerable. And we asked experts, please advise.”

He stated that he was aware the website was not developed by the electoral committee, adding that he was “not ascribing blame to anyone. We are saying, ‘Let’s be careful because this portal may be vulnerable.”

Noting that “We are all stakeholders and the cost of silence is too high,” Akpata queried: “Can it (voting portal) withstand multiple concurrences for about 40,000 voters?” He also expressed worry that “there’s little information out there.”

While Echeonwu stated that the NBA website was “for verification,” ECNBA Secretary Cordelia Eke asserted that “I do not believe the ECNBA at any time said election will be conducted on website.” But Akpata insisted that the infographics state otherwise.

Continuing, Echeonwu said: “Let me make it absolutely clear that the protocol for the election has not been released by ECNBA. Someone had alluded that ECNBA released the election protocol. Please consider it an unhealthy and malicious circulation. When ECNBA releases its protocol it will come directly to you and everybody will know.
“We are working with a timeline. We have assured you it is a seamless process. It is a do-it-yourself process. You don’t need to contact any help desk other than the ECNBA Help Desk to help you. You don’t need to set up any Help Desk; you will be crossing the boundaries if you do that. We would consider that crossing the boundary.”

On his part, another presidential candidate, Dr. Babatunde Ajibade SAN commended the committee for “operating under unusual circumstances,” a veiled reference to the coronavirus pandemic. He however sought clarification on when the election protocols would be made available to the candidates as well as the modalities for deploying election agents in the ECNBA Situation Room.

Responding, the ECNBA Chairman promised that “We will communicate (this) to candidates in the shortest possible time.”