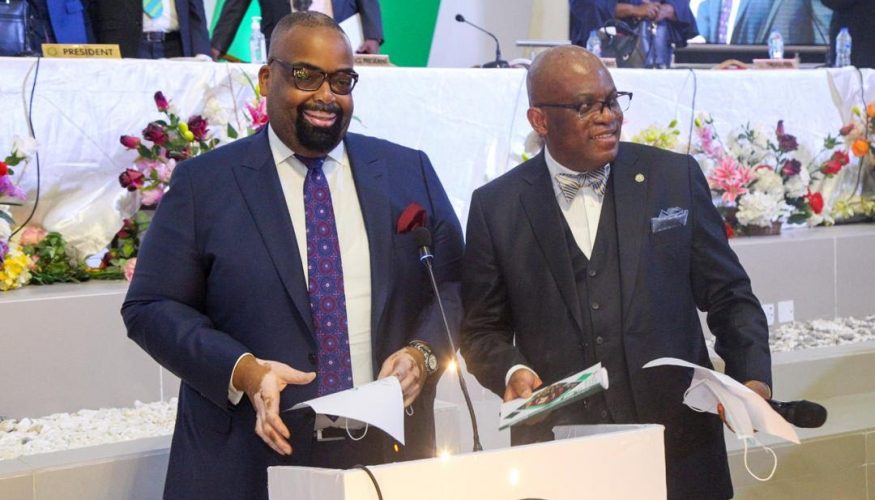 NBA INAUGURATION: ‘THE WORK AHEAD IS IMMENSE,’ SAYS AKPATA

In his inaugural speech after he was sworn-in by the immediate past NBA President, Mr. Paul Usoro SAN, Akpata noted that the task ahead of his team of National Officers is “immense,” and urged former NBA presidential candidates, Mr. Dele Adesina SAN and Dr. Babatunde Ajibade SAN to join hands with him to lift the Bar.

His inauguration came on the heels of the Annual General Meeting of the association which was almost overshadowed by a bust-up between the leading lights of the Usoro Administration.

Acknowledging the roles of his parents and teachers in his life, Akpata stated that “I consider it a great honour and privilege to stand before you today, on the epochal 60th anniversary of the Nigerian Bar Association (NBA), to be sworn in as the 30th President of the foremost professional membership association in Nigeria and the most influential network of legal practitioners in Africa.”

In his 20-page inaugural address, the newly sworn-in NBA President thanked his partners at TEMPLARS for their support, adding that “in recognition of the magnitude of the job at hand, they gave me their blessing to embark on sabbatical for the next 24 months to focus on the job. I cannot thank them enough.” Akpata also thanked his Campaign Team led by Mr. Tobenna Erojikwe for their commitment and said that they gave meaning to the saying that “a small group of thoughtful, committed people can change the world.”

Akpata commended “very senior members of the Bar especially those who demonstrated their belief in my candidacy and stood by me publicly even when it was the less convenient thing to do,” while acknowledging “the role of the young lawyers in my emergence as the President of the NBA. Indeed, I was characterised as the candidate of the young lawyers and they came through for me. I thank them immensely for their support.”

Turning to Usoro, Akpata commended the former NBA President and his team of National Officers “for the role they played in navigating the affairs of our Association in the past two years,” noting that while it has been a “difficult year” for everyone all over the world, “it is to their credit that they did not crumble under pressure and were able to pilot the affairs of the NBA until the end.”

He noted that while there were “clearly moments of tension” between him and the Electoral Committee of the Nigerian Bar Association (ECNBA) led by Mr. Tawo Eja Tawo SAN, “I am gratified that they understood that those were borne out of a strong desire for things to be done the right way.”

On the controversial NBA Elections, the leading commercial lawyer expressed his “utmost respect” for Adesina and Ajibade “who have contributed in very significant ways to the growth and development of our Association,” noting that “I therefore intend to count on their support and counsel as we work towards Securing the Future through a United Bar that Works for All.”

Akpata emphasized the need for unity at the Bar, moreso given the issues that trailed “the uniqueness of my candidacy, being the first non-Senior Advocate of Nigeria to win an election as NBA President in thirty years.” He noted that “the elections are now over, and we must, of necessity, retrace our steps.”

The newly sworn-in NBA President frowned at divisions within the ranks of lawyers and stated that “The Bar I want to lead henceforth is one that is united on all fronts and that recognises that our diversity is, perhaps, our greatest strength.” His words: “We must be kind, magnanimous, respectful, and sensitive in our words and actions, as doing otherwise would be a great disservice to our vision of building a stronger and formidable Bar. Now is the time to come together because a divided Bar is a defeated Bar.”

On the vexed issue of electoral reforms, Akpata said that “it would be remiss of me not to acknowledge that there were several glitches in the build up to the Election,” stressing that “As Nigeria’s foremost professional Association, our electoral process ought to be the standard for others to follow and should, to the extent humanly possible, be devoid of the glitches that we witnessed.”

He said instituting an efficient data management system for the NBA and institutional and structural reforms “is now a top priority issue for me,” even as he announced the setting up of a 12-member “Electoral Audit and Reforms Committee” to be led by respected Bar Leader, Mr. Ayo Akintunde SAN. The committee will “audit our 2016, 2018 and 2020 elections and recommend reforms for our electoral systems and processes.” Akpata promised “to implement whatever recommendations they come up with well ahead of time to ensure that the 2022 election is devoid of those glitches that we noticed in the 2020 election and that we truly set a standard that others will aspire to.”

Turning to what he titled “The task ahead,” the NBA President decried the “unfortunate erosion of the ethical values and professionalism that once characterised our Noble Association,” adding that “this must stop.”

Akpata pledged to enhance the welfare of lawyers, assuring that he would “personally engage the leadership of these organisations (other professions and private organisations) and prevail on them to refrain from the practice of encroaching into areas that are the exclusive preserve of lawyers. In cases where this is not heeded, we shall not hesitate to challenge such encroachments in court. It is no longer business as usual.” He also promised to engage the heads of the major regulatory agencies “to ensure better synergy with the NBA in the interest of our members.”

The new NBA President promised that his administration would deliver two free packs of 48 stamps to all lawyers that pay their Bar Practising Fee before March 31 of each year and assured that he would “negotiate a more favourable deal with our current insurance policy provider for an upward review of benefits to members” as well as institute a comprehensive health insurance scheme and a medical health fund “to help deserving members subscribe to the scheme.”

Saying that he would “tackle the menace of harassment and brutality of lawyers by the security agencies,” Akpata assured that his administration would also strengthen the NBA Human Rights Institute “and also engage the heads of the various security agencies proactively and constructively from the outset, to set the tone for a collaborative and mutually beneficial relationship between their respective agencies and our Association.” This is aside from setting up a Lawyers’ Defence Fund “to cater for the free representation of lawyers who are financial members of the association and are victims of human rights violation by the securities agencies.”

Akpata also rolled out the plans of his administration in the areas of capacity building, administration of justice, promotion of the rule of law and human rights, ethics and discipline, as well as inclusiveness at the Bar.

He committed to “create an administrative structure that ensures that we are able to deliver on our blueprint for the progress of the NBA as an institution” and “a legal profession and indeed a Bar that stands tall as an unwavering bastion of the rule of law, an advocate for the sanctity and independence of the judiciary, and a bulwark against tyranny and oppression.”