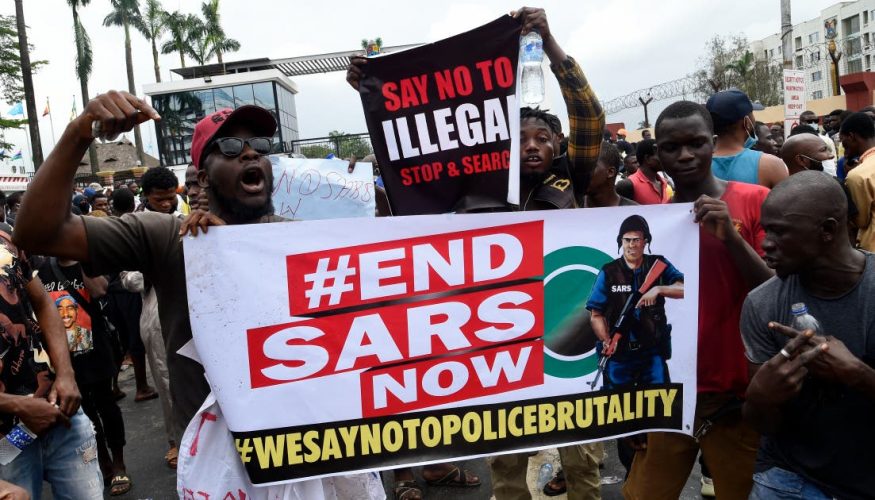 Briefing NBA Lagos Branch members after the visit, Akpata vowed that NBA will closely monitor the activities of the panel to ensure that justice is done to all victims of the crisis.

Akpata, who was addressing the lawyers during their monthly general meeting, said that NBA would also set up free legal assistance teams to help victims pursue their cases before the panel, even as he called for “sober reflection and positive action.”

He stated that he visited the Lagos State panel of enquiry to represent the association, adding: “My Lord Justice (Doris) Okuwobi gave me the opportunity to let the panel know that the NBA intends to be actively involved in this panel in Lagos and similar panels set up all over the country.”

Speaking specifically on NBA’s roadmap for the enquiry panels, Akpata said: “And just to latch on to the point made by my brother Emeka Nwadioke, our intervention will be two-pronged: firstly, as we have already indicated, we want to provide through our members pro bono service to victims – so that we can help them at all these panels, the 36 States and the National Human Rights Commission Panel set up in Abuja, help these victims articulate their petitions and also present their petitions.

“We are going to set up teams. We already have the Public Interest Team that we are putting together and a database of lawyers who have already indicated that they would like to be part of this process. He stated that the process is ongoing and urged the branch leadership to seek out more volunteers for the pro bono project.

Continuing, Akpata said: “The second leg of our intervention would be serving as independent observers in all of these panels, serving as friends of the court – or friends of the panel, as it were – to ensure that the panels are proceeding unimpeded.”

He stated that the Lagos State Panel of Inquiry leadership was “very delighted that the NBA is ready to play these roles, and has assured me that we would be given due recognition, and that our members who come in to play the independent observer role would be duly accorded recognition and audience as at when necessary.

“For Lagos, for example, by my calculation there would be 72 days of sitting for the next 6 months. So it will be important for us to set up committees. The volunteers can take turns to participate in the proceedings of the panel so that we can be the watchdog, play the watchdog role that is ours to play. We intend to be very involved.”

Turning to the protests, the NBA president noted that many lawyers bore the brunt of the destruction of properties. Noting that standing aloof is not an option, Akpata stated that there are “wider issues” involved. He said that beyond the #ENDSARS protests and the Lekki Toll Plaza killings, “there are root causes that we must address.”

On the efforts earlier made by the NBA, Akpata stated that in the days leading to October 20 when the crisis peaked with the killing of some protesters at Lekki Toll Plaza, NBA led efforts along with its branches and States Attorneys-General to free all detained protesters, adding that he is “very proud of the work our members did facilitating the release of members of the public who were arrested around the country.

“Beyond that, we very quickly collaborated with the National Human Rights Commission. As you know, we are working closely with the NHRC on the independent panel of enquiry that has been set up by the commission to look into the SARS protest. Our First Vice President is a member of that panel which is led by the Honourable Justice Suleiman Galadima.

“We are also working closely with the National Assembly. Working closely with the Speaker of the House of Representatives, we set up a 7-man Committee on tweaking the Police Service Commission Act to ensure that the new iteration of that law will cater for a transparency and accountability framework that will deal with erring police officers.

“As soon as the unfortunate event of 20th of October happened, we issued a statement where we made it categorically clear on behalf of the association that the event of that night was totally unacceptable – shooting at unarmed harmless protesters – totally unacceptable, and would not be entertained by the Nigerian Bar Association; that we would rise up in defence of any Nigerian so assaulted, which is what we are doing.

“Immediately, we called for a meeting of the NBA and at that meeting we discussed the issue extensively and came out with a communiqué which had since been issued. Essentially, the association has given us the mandate not only to do that which we are already doing – which is to support Nigerians who have come under attack from the security forces – but also to intervene in what has become an impasse, to intervene in a situation that is degenerating by the day because the society is looking up to us as the NBA to intervene in this process.

“Of course, you know that it has come close to home – uncomfortably so. We inspected the High Court at Igbosere and what we saw left us speechless. It is one thing to hear about the destruction, but to see it first-hand leaves you numb as it did to us yesterday (Sunday).”

He urged NBA Lagos Branch to “lead the way” in working with the judiciary “to see how we can come back to where we were before the unfortunate incident, and taking the opportunity to improve on the facilities that existed previously.”

Akpata also commiserated with members of the branch whose offices were vandalized during the carnage at City Hall.

In his response, NBA Lagos Branch Chairman, Mr. Yemi Akangbe applauded Akpata intiitives taken by his administration to tackle the crisis, saying: “You have stepped in an.d taken leadership. We are proud of you as an esteemed member of this branch.”