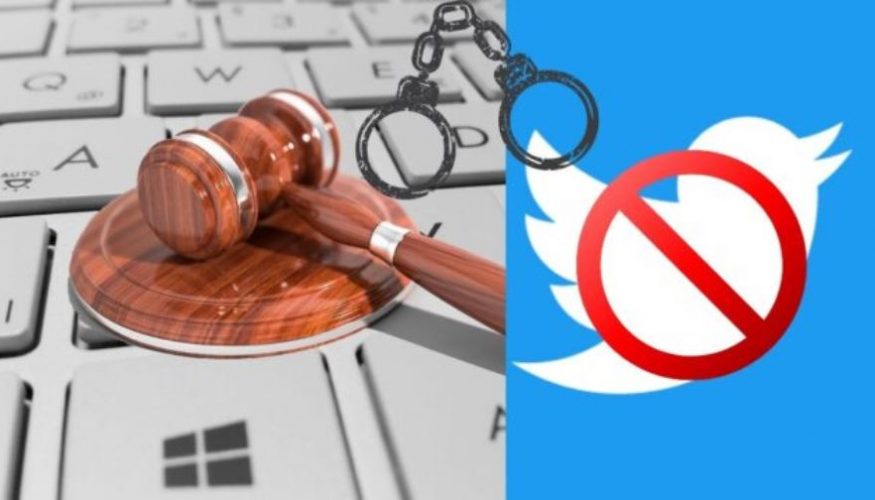 TWITTER BAN, CENSORSHIP AND IMPLICATIONS FOR FREEDOM OF EXPRESSION (1)

IGE ASEMUDARA is a rights activist and Notary Public for Nigeria. In this article, the senior lawyer notes that free speech has become a dominant issue due to the suspension of TWITTER operations in Nigeria, adding that while there are permissible online censorships, the law frowns against suppression of public information through censorship

At the moment, free speech and censorship has taken the centre stage of political and legal discussions in Nigeria largely due to the “squabble” between Twitter Incorporated and Nigeria’s President, General Muhammadu Buhari on the question of censorship. In order to put the issues thrown up by their controversy in perspective, this article shall briefly examine the nature and essence of freedom of expression and the implication of online censorship.

Freedom of expression is basically the fundamental right of a person to hold, articulate, share or disseminate his views and opinions or even receive information on an issue in a polity. There are some claims that freedom of expression (also sometimes called freedom of speech) originated from the ancient Greece appearing in Greek literature around 5th Century BC as “parrhesia” meaning “free speech”. It has since undergone several historical metamorphoses including political expansion, legislative recognition, international affirmation and judicial pronouncements. The English Bill of Rights 1689 recognised freedom of speech as essential whilst the French Declaration of the Rights of Man 1789 broadened its scope to cover free communication of ideas and opinions as well as freedom to speak, write and print. On its own part, the First Amendment to the Constitution of the United States of America adopted on the 15th of December, 1791 expressly forbade congress from making any law abridging the freedom of speech or of the press.

Thus, the right to freedom of expression continued to gain prominence to the extent that in the early years of the 2nd World War, American President, Franklin D. Roosevelt delivered an address in January, 1941 where he proposed four fundamental freedoms that people everywhere in the world must enjoy namely; freedom of speech, freedom of worship, freedom from want and freedom from fear. Incidentally, freedom of speech topped the list of the four fundamental freedoms. So, it was not an accident that the Universal Declaration of Human Rights 1948 which convincingly shut the barrels of gun used at the 2nd World War contains in its Article 19 the following provisions “Everyone has the right to freedom of opinion and expression; this right includes freedom to hold opinions without interference and to seek, receive and impart information and ideas through any media and regardless of frontiers”. The International Covenant on Civil and Political Rights adopted in 1966 also provide for free speech in Article 19 of the treaty that came into force in March, 1976. In the same vein, our regional human rights instrument, the African Charter on Human and People’s Rights in its Article 9 specifically provide for the right to receive and disseminate information, and to express opinions within the law.

In Nigeria, the much vilified 1999 Constitution provides for freedom of expression and the press in Section 39 as follows: “(1) every person shall be entitled to freedom of expression, including freedom to hold opinions and to receive and impart ideas and information without interference”. “(2) Without prejudice to the generality of subsection (1) of this section, every person shall be entitled to own, establish and operate any medium for the dissemination of information, ideas and opinions: Provided that no person, other than the Government of the Federation or of a State or any other person ort body authorized by the president on the fulfillment of the conditions laid down by an Act of the National Assembly, shall own, establish or operate a television or wireless broadcasting station for any purpose or whatsoever”. “(3) Nothing in this section shall invalidate any law that is reasonably justifiable in a democratic society; (a) For the purpose of preventing the disclosure of information received in confidence, maintaining the authority and independence of courts or regulating telephone, wireless broadcasting, television or the exhibition of cinematograph films; or (b) imposing restrictions upon persons holding office under the Government of the Federation or of a State, members of the armed forces of the Federation or member of the Nigeria Police Force or other Government security services or agencies established by law”.

With the emergence of the wonders of the internet, this fundamental freedom has expanded to cover the right to receive, store, share or disseminate information, views, opinions and ideas on the internet just as freedom of the press now covers online media including the social media. Today, social media online platforms such as Facebook, Twitter, WhatsApp, Instagram etc have taken a huge space in information gathering and dissemination including airing political views and opinions and thus, sensitive information can be disseminated across the globe at a pace faster than the speed of light. So, governments and private authorities also put measures in place to control the dissemination of information or the spreading of views and ideas that may impact on them. This is called censorship.

Censorship is a restriction that has travelled with the freedom of expression through the ages. It is a deliberate suppression of free speech, opinions, public communication and a restriction on information dissemination by public or private body usually on the ground of it being harmful, offensive, objectionable, not convenient or just unacceptable. Censorship may come in different forms. It may be by legislation and this accounts for the qualification in most legislative provisions on freedom of speech. It may also be by rules set up by organizations or private individuals. For instance, all the social media operators have their rules of engagement governing the kind of information or images to be shared through them. For example, Twitter recently pulled down a particular statement tweeted by Nigeria’s President, General Muhammadu Buhari on the basis of its offending Twitter rules on permissible posts. In response, the General banned the use of Twitter in Nigeria virtual space by blocking the social media company. He went on to ban Nigerians from using Twitter handles as the company’s mission in Nigeria is said to be suspect. Now, both of them are involved in censorship of some sorts. While Twitter’s censorship is directed at a particular tweet, General Buhari’s censorship is quite sweeping as same is directed on all posts and activities undertaken by Nigerians on Twitter or by Twitter in Nigeria. This is nothing but an annihilation of free speech.

One terrible implication of such attempt at online censorship of freedom of expression is that same portends evil for other freedoms. For example, the freedom to propagate your religion, to disseminate religious information and to practice one’s faith is intricately connected to the freedom of expression as it had become clear since the days of R. v. Penn and Mead (1670) 6 St Tr 951 when William Penn was obviously persecuted (not prosecuted) for preaching in Gracechurch street, London to a gathering of more than five persons contrary to the Conventicle Act. In the same vein, it is a total violation of the right to religion guaranteed by Section 38 of the Constitution of Nigeria 1999 (as amended) and other human rights instruments to merely conceive the idea, air it or even take any step to bully the General Overseers of the Redeemed Christian Church of God, the Deeper Life Bible Church or any religious body at all with threat of prosecution because they insist on continuing to use their Twitter handles to continue to propagate their faith and religious beliefs.

As already mentioned, freedom of speech has grown through the ages. Today, we now have what is termed commercial freedom of expression. This includes the rights to advertise your products etc and this also extends online. For example, virtually all the news media in Nigeria have Twitter handles with which they advance press freedoms and enhance their commercial viability. In the same vein, individual businesses do advertise their enterprise online including on Twitter, Facebook, Insagram, Linkedn. In fact, market has moved to the virtual space. So, when a President bans the entirety of his citizens both corporate and natural from the social media space or an online platform that has up to 40 million of its population, he has not just denied them their commercial freedom of expression, he has killed their rights to earn a living!

Yes, the law allows for moderate and legitimate censorship of free speech following the philosophical foundation laid by John Stuart Mills, in his On Liberty, where he propounded the harm to others test. Joel Feinberg also recently introduced the “offensive principle” as the harm to others test is generally seen as too tall a measure. The reasonable parameter of measuring the essence of censorship is to see whether the expression sought to be censored causes harm to others or is offensive to others. Thus, the law now intervenes in online expressions through legislations. The United States was the first to intervene with the Communications Decency Act of 1996 (CDA). Since that time, several legislations have been passed in order to ensure that sanity reigns in online expressions and dissemination of information. In Nigeria, Cyber Crime (Prohibition, Prevention Etc) Act 2015 is a reaction to unbridled liberty on the net which caused harm to others or became offensive to members of the public.

Whilst there are permissible online censorships, it is also the policy of the law that public information is not unduly suppressed through censorship. Thus, the Freedom of Information Act, 2011 was passed to give the public some level of access to public information in order to enhance the quality of citizens’ opinion on the policies and programmes of government. By and large, censorship either in suppressing free speech or withholding needed information from the public must not cross the clear lines drawn by the Constitution and other human rights instruments to which Nigeria is a signatory as that is the way to be right with this right!

Ige Asemudara is the convener of the Mission Against Injustice in Nigeria (MAIN).