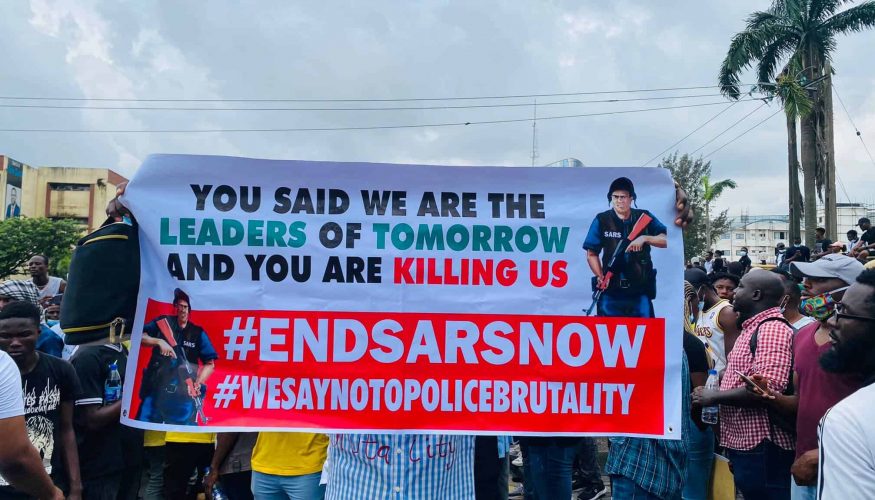 The United Nations Committee against Torture (UN-CAT) is worried by “militarization of policing activities” by Nigeria through joint operations, saying this was reported during the #ENDSARS protest at Lekki on October 20, 2020 and the lockdown imposed to contain the spread of the COVID-19 pandemic.

The Committee also stated that it is “deeply concerned at allegations of gross-misconduct by the Special Anti Robbery Squad (SARS) of the Nigeria Police Force,” even as it also expressed concern at “reports on the continuous use of torture in interrogations by police, military and civilian joint task force officers (CJTF).”

In its latest report on torture in Nigeria, UN-CAT commended “ongoing efforts to reform the police, the enactment of the Police Act and the revision of the Police Force Order 237 incorporating international standards,” but stated that it is concerned at reports of excessive use of force, “including lethal force by shooting leading to extrajudicial killings, during arrests or policing the demonstrations.”

It noted that the “growing militarization of policing activities” led to 38 complaints of extrajudicial killings recorded by the National Human Rights Commission, or other demonstrations having been held in south-eastern states, adding that “The Committee is deeply concerned at allegations of gross-misconduct by the Special Anti Robbery Squad (SARS) of the Nigeria Police Force.”

While noting Nigeria’s commissioning of the National Human Rights Commission to conduct investigations, establishing judicial panels of inquiries at federal and states level, and the disbandment of SARS, the Committee “observes that the judicial panels received reportedly 2,500 complaints on torture and ill-treatment, arbitrary arrests and detentions, and extrajudicial killings, but remains concerned that no reports on investigations have been made public, accompanied by the lack of accountability.”

It noted that some of the panels reportedly stopped sitting due to lack of funding, adding that the “Committee is also concerned at: the use of 2014 legislation by the police against lesbian, gay, bisexual, transgender and intersex (LGBTI) persons to legitimize arbitrary arrest and detention, among others; at reports of arbitrary detention without criminal charge or conviction and ill-treatment of persons with intellectual and psychosocial disabilities in public institutions and private settings, including religious and traditional healing centres; and, ill-treatment inflicted on drug users particularly by members of National Drug Law Enforcement Agency and in the drug rehabilitation facilities (arts. 1, 2, 11-14 and 16).”

The Committee urged the Federal Government to “Ensure that law enforcement and security forces personnel continue to receive training on the absolute prohibition of torture and on the use of force, including the Police Force Order 237, taking into account the United Nations Basic Principles on the Use of Force and Firearms by Law Enforcement Officials;

“Make the findings of the established judicial panels of inquiries public and immediately investigate allegations of abuses committed by police, SARS officers, and security forces employed in the policing activities, by an independent body and provide disaggregated information on prosecutions, full redress of victims, and resources allocated for that purpose;

“Stop and investigate arbitrary detentions and assaults against persons with disabilities, drug users or LGBTI persons and investigate those incidents, prosecute alleged perpetrators and provide effective remedies to the victims.”

Turning to inadmissibility of confessions obtained under torture, the UN-CAT welcomed legislation prohibiting the admission of confessions obtained under torture (the Anti-Torture Act, the Evidence Act, and the Administration of Criminal Justice Act). It however expressed concern at reports on the “continuous use of torture in interrogations by police, military and civilian joint task force officers (CJTF).”

It noted that “Despite the existing legal safeguards, including recording of confessions” or possibility to complain about duress before a judge, “numerous reports highlight that coerced confessions are accepted in practice contrary to the law. The Committee regrets that no solid information has been provided by the State party about the application of these legal safeguards by judges in practice (arts. 2, 10 and 15).”

The Committee urged the Federal Government to “Adopt effective measures to ensure that confessions, statements and other evidence obtained through torture or ill-treatment are not admitted in evidence in practice, except against persons accused of committing torture, as evidence that the statement was made under duress, and that prosecutors and judges ask all defendants in criminal cases whether they were tortured or ill-treated, that all allegations of torture and ill-treatment raised in judicial proceedings in the State party are promptly and effectively investigated and alleged perpetrators prosecuted and punished; Provide information on cases, where this has been applied.”

According to the Committee, the Federal Government should “Ensure that all police officers, national security officers and military, judges and public prosecutors receive mandatory training emphasizing the link between non-coercive interrogation techniques, the prohibition of torture and ill-treatment and the obligation of the judiciary to invalidate confessions made under torture.”