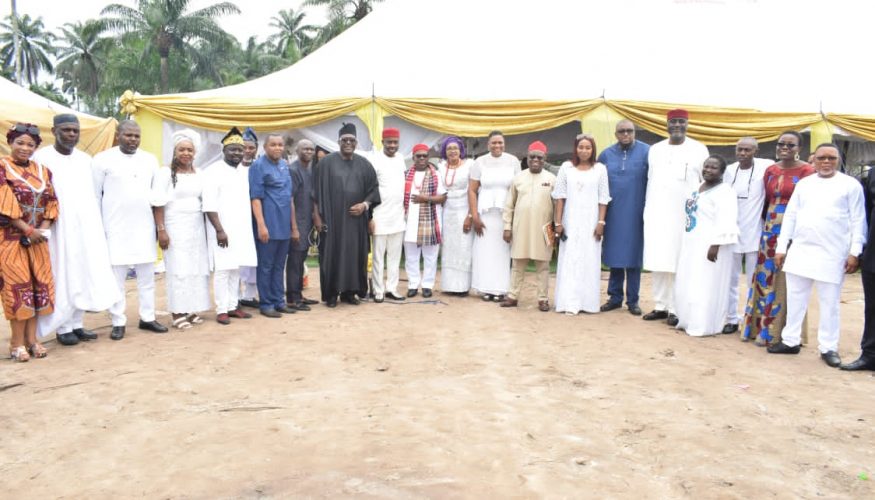 It was a roll-call of ‘Who is who’ in the Bar, Bench and political sphere at the burial ceremony for Pa Ubani Egbedubi Nwokocha, the father of Nigerian Bar Association Section on Public Interest and Development Law (NBA-SPIDEL) Chairman, Dr. Monday Ubani.

The late patriarch of the Ubani Dynasty was interred at the weekend in his home town in Umuosoko Awomukwu, Ikwuano Local Government Area of Abia State.

In his tribute, Ogah stated that late Pa Ubani lived a fulfilled life and left many good legacies, “including my good friend and brother, Dr. Monday Ubani who is known to be a voice for voiceless Nigerian masses.” He eulogized Ubani for being a true son of his late father.

He said that his presence was to show solidarity and mourn with Ubani given the close bond that exists between him and the NBA-SPIDEL Chairman. He extolled the NBA-SPIDEL chieftain for his immense contributions to the development of the country.

On his part, the Senate Chief Whip, Senator Orji Uzor Kalu (Abia North) described ‘Egoro’ as one that stamped indelible footprint in the sands of time. His words: “While death at any age is sad, we are however consoled by the fact that he lived a fulfilled life as a loving husband, caring father, community leader, devout Christian and philanthropist.”

Senator Nkechi Nwaogu enjoined the Chief Mourner to take comfort in knowing that late Pa Ubani is resting in the arms of the Lord. She said: “Though his death obviously has created a big vacuum in the family but be strongly consoled by the fact that he lived a fulfilled life.”

Rep. Sam Onuigbo stated that “Egoro Oti must have transitioned to eternal glory with a smile on his face and a heart full of joy and pride,” even as the former Superintendent of Assemblies of God Nigeria, Rev. Dr. Chidi Okoroafor enjoined the congregation to live a life with eternity in mind.

Speaking to newsmen shortly after the interment of the late Patriarch, the first and only son of Late Pa Egbedubi, Dr. Monday Ubani expressed joy over the large turnout of people at the event. His words: “I’m amazed by the large turnout of personalities – the religious, politicians, lawyers etc.” He said that his father’s act of philanthropy taught him that one does not need to be a multi-millionaire before he or she can help those in need. He said: “Even in my father’s low state, he was able to help those in need. The culture of philanthropy, culture of kindness, culture of good heart were part of what my father represented…”

Dr. Ubani thanked everyone who contributed in one way or the order to the success of the burial of his late father.