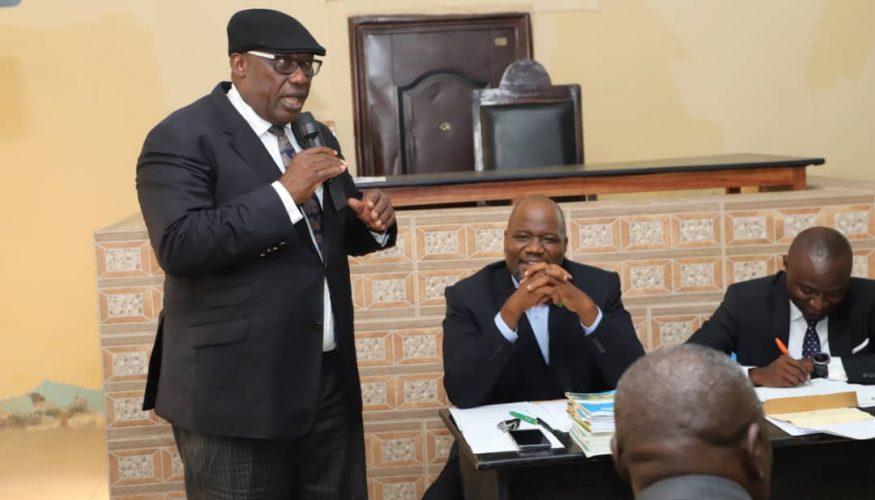 The Chairman of the Nigerian Bar Association (NBA), Jos Branch has described the NBA Security Agencies Relations Committee (NBA-SARC) Chairman, Chief Joe-Kyari Gadzama SAN as a juggernaut who transcends above everything noble.

Speaking yesterday while addressing members of the branch during their monthly general meeting, Bawa also hinted that the leading litigator is a crowd-puller when he said: “So many turned up for this meeting because they heard you were coming. I have never seen some faces since I became chairman of NBA Jos Branch, but I’m privileged to identify with them today because of you.”

Gadzama had visited the branch accompanied by a strong delegation and in continuation of his consultations in his quest for the presidency of the NBA.

Mr. Tobb Kekemeke, a long-term friend and ardent supporter of Gadzama, described him as “an astute Bar man who has given and is still giving to many in large and impressive quantum.” He noted that the monthly meeting was hosted by “Friends of J-K Gadzama SAN.”

Also speaking, a Governorship aspirant, Mr. G. S. Pwul, SAN expressed delight at the virtues embedded in the foremost arbitrator, noting that “he is a humble man, a man of integrity, a son of the soil.” He assured Gadzama of massive support from the branch in the run-up to the NBA Elections.

Responding, Gadzama thanked the Branch executives and members for the warm welcome, urging them to support his vision for the Bar. His words: “When I climb, I do not remove the ladder; I leave it there for others to climb because I stand on justice, equity, good conscience and what is right.” He concluded that the future is only successful when there are successful successors.

The branch members welcomed the entourage with a standing ovation and rounds for applause “in recognition of the presence of a giant in the legal profession whose milk of kindness has flowed lavishingly on noble men and women of the legal profession and beyond,” a statement said.

In his response, Gadzama declared that dignity and respect for lawyers are virtues that should be upheld to the letter irrespective of seniority or rank in the legal profession. He urged the members to “keep the sanctity of NBA by walking in the footsteps of pace setters who have proven themselves over the years.”

The NBA Bukuru Branch YLF Chairman, Mr. Emmanuel Obateru pledged his support and that of his friends to the aspiration of the Bar Leader.

On his part, Mr. Fom Bot said: “I have been a supporter of Chief Joe-Kyari Gadzama, SAN for more than 10 years. Wherever he goes, I will go. I pledge my support and promise to avail myself through the process till finish.”