A frontline presidential aspirant in the forthcoming Nigerian Bar Association (NBA) 2022 Elections, Mr. Yakubu Chonoko Maikyau SAN has again been slammed with another petition by an Abuja-based lawyer.

In the petition dated 6th May, 2022 and received yesterday by the Electoral Committee of the Nigerian Bar Association (ECNBA), the petitioner, Mr. Tochukwu Ohazuruike urged the electoral committee to “do the needful by ensuring that only qualified persons are cleared to contest the forthcoming NBA National officers’ election.”

Though CITY LAWYER contacted the presidential hopeful on the latest petition against his candidacy, he was yet to respond at press time.

Titled “INELIGIBILITY OF Y. C. MAIKYAU, SAN FOR ELECTION INTO THE OFFICE OF PRESIDENT OF THE NIGERIAN BAR ASSOCIATION (NBA) ON THE GROUND OF NON-FULFILLMENT OF SECTION 9(3)©(I) OF NBA CONSTITUTION,” the petition set out reasons why Maikyau should be barred from contesting the election scheduled for July 16, 2022.

Describing himself as a “concerned member of the Bar,” Ohazuruike stated that he considered it necessary “to formally complain and bring to the attention of the ECNBA that Y. C. Maikyau SAN is not constitutionally qualified to contest for the office of President in the forthcoming 2022 NBA National Officers’ election due to his failure to meet the eligibility criteria of not less than two years membership of NEC at the time of nomination mandatorily required under section 9(3)(c)(i) of the NBA Constitution.”

According to Ohazuruike, section 9(3)(c)(i) of the NBA Constitution “stipulates membership of NEC for not less than two (2) years at the time of nomination as a mandatory qualification for the office of the NBA President.” He noted that the same requirement was “clearly restated” on page 1 of the ECNBA Preliminary Notice of Election dated 17th March, 2022, adding that “My complaint herein is that Y. C. Maikyau has not met this eligibility requirement to contest for the office of President of the NBA as demonstrated in the succeeding paragraphs of this complaint.”

Setting out the particulars of the petition, Ohazuruike argued that Maikyau “was first appointed as a co-opted member of NEC in the year 2018 by the NBA administration led by Paul Usoro, SAN. Y. C. Maikyau SAN however automatically lost his membership of NEC when he absented himself, refused, failed and/or omitted to attend three (3) consecutive meetings of NEC by virtue of section 8(8) of the NBA Constitution.”

The petitioner argued that “Having lost his membership of NEC within the period under review, it therefore means such period of his non-membership cannot be reckoned with for purposes of computation of time as NEC member for his nomination, qualification and participation in the 2022 NBA National Officers’ election.”

Noting that minutes of NEC meetings showing attendance of members “are usually circulated to members and are thus easily accessible and verifiable,” the petitioner wrote: “Nevertheless, I have attached copies of verifiable minutes of NEC meetings and signed attendance lists within the period of 2018 to 2020 which confirms without equivocation that Y. C. Maikyau SAN indeed missed three consecutive meetings by virtue of which he automatically lost his NEC membership at the time by virtue of section 8(8) of the Constitution which provides as follows:

“Any member who is absent from three (3) consecutive meetings of the National Executive Council shall cease to be a member of the Council unless he/she shows reasonable cause for such absence to the satisfaction of the Council.”

Ohazuruike contended that “From the attached lists and minutes, it is clear that Y. C. Maikyau SAN automatically lost his initial membership of NEC before the end of the two years 2018 to 2020 tenure of Paul Usoro, SAN led administration. The implication of this is that in the eyes of the law, Y. C. Maikyau SAN was not a NEC member for that material period.”

Noting that Maikyau was again appointed as a co-opted member of NEC under the current NBA administration which was inaugurated on August 2020, Ohazuruike said: “Assuming that Y. C. Maikyau SAN has not missed three consecutive meetings under the current dispensation, he has still not and could not have met the NEC eligibility criteria of not less than two years between the short timeframe of August, 2020 to the 15th April, 2022 deadline for nomination of candidates which is barely 20 months (less than the requisite two years). Thus, the NEC membership of Y. C. Maikyau SAN under the current dispensation does not also meet the minimum two years NEC membership stipulated in the NBA Constitution.

“Flowing from the foregoing, it is crystal clear that Y. C. Maikyau SAN does not possess the qualification of not less than two years membership of NEC. Y. C. Maikyau SAN is therefore ineligible to contest the 2022 National Officers’ election and should therefore not be cleared by the ECNBA in line with the NBA constitution.”

Saying that the world “is watching the NBA electoral process and compliance with set rules and laid down regulations is not negotiable,” Ohazuruike warned that “As a professional body of lawyers with promotion and protection of the principles of the rule of law as one of its aims/objectives, we cannot afford to set bad precedents especially as we approach the 2023 general elections where the NBA as a body will be expected to uphold and advance the rule of law.”

The petitioner enjoined the electoral committee “to do the needful by ensuring that only qualified persons are cleared to contest the forthcoming NBA National officers’ election.”

CITY LAWYER recalls that embattled Bar aspirant, Mr. Kayode Bello had earlier brought a petition asking the ECNBA to also bar Maikyau from the eagerly awaited election for alleged disobedience of court order among others. Maikyau has denied the charge. 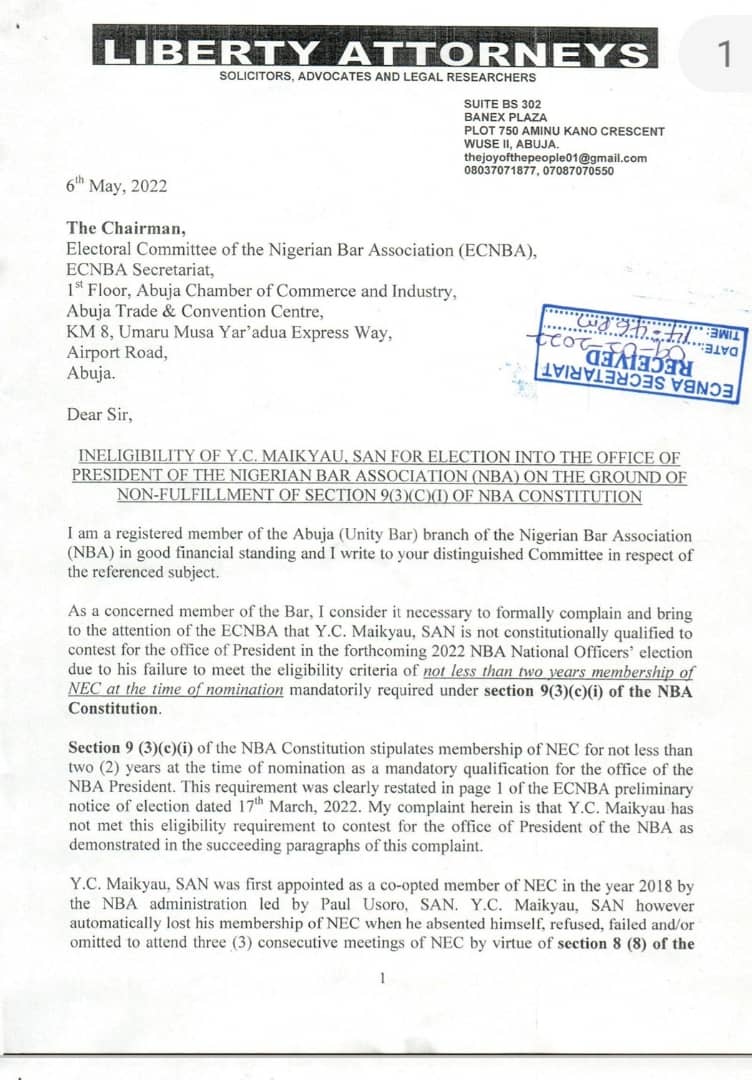 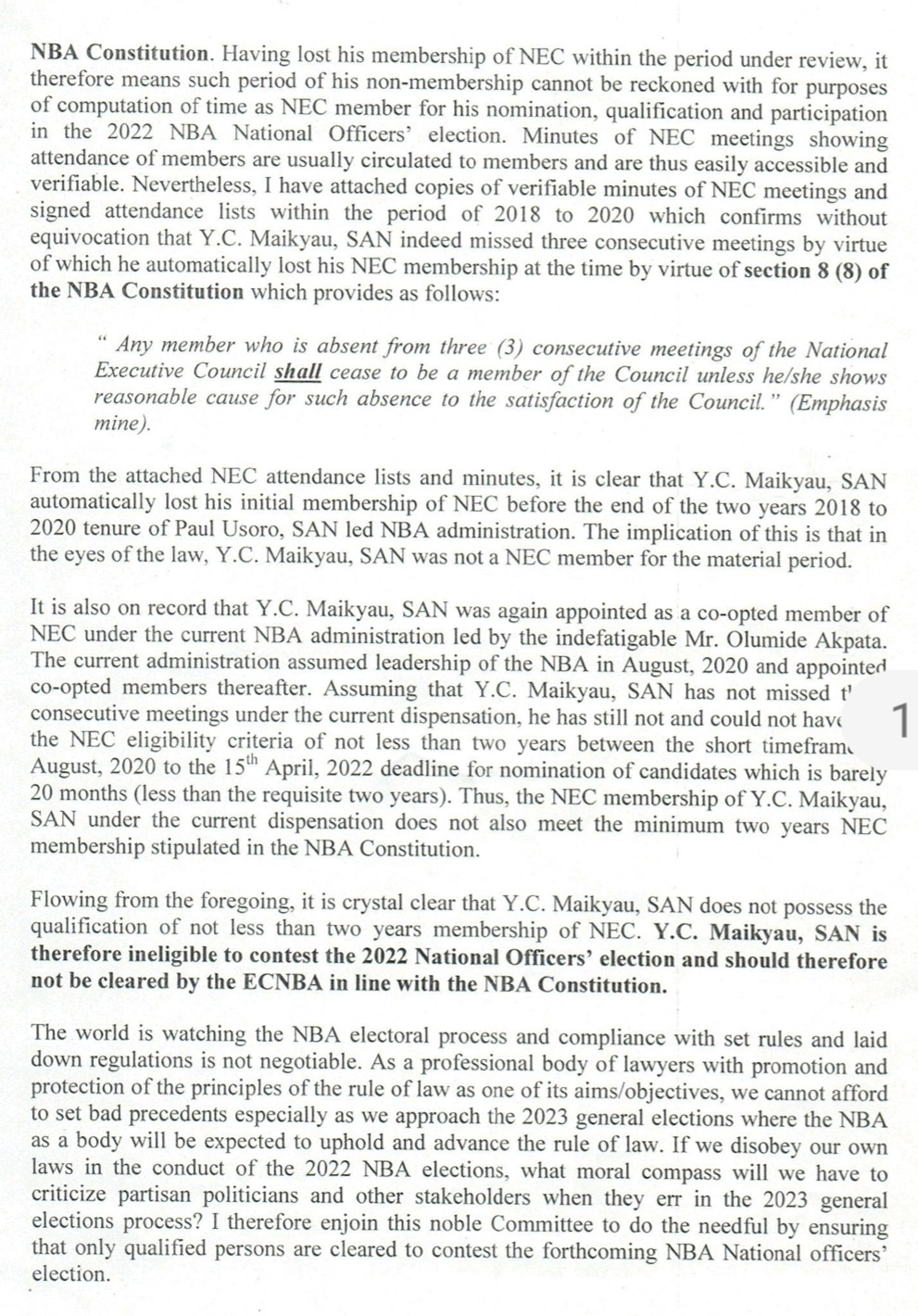 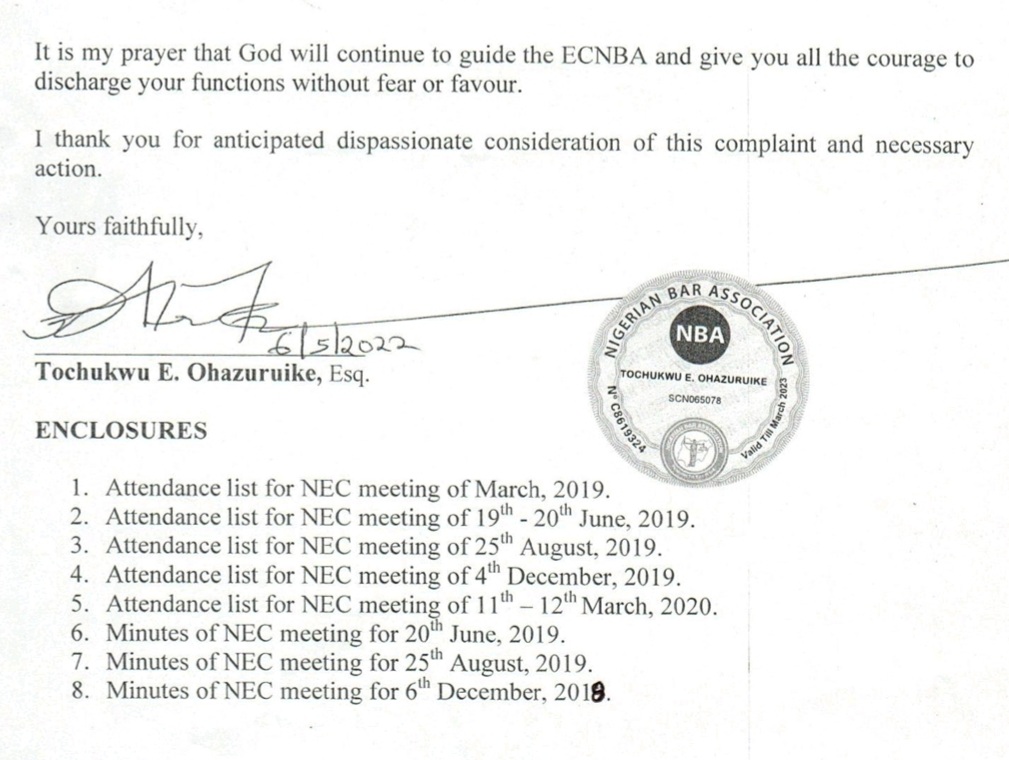