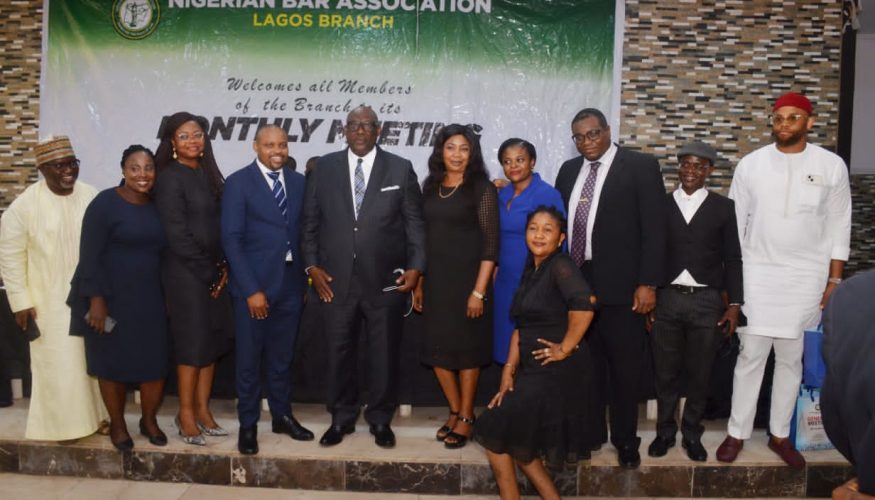 Gadzama, who is also the Chairman of the Body of Benchers Mentorship Committee for Young Lawyers, has equally relocated his Lagos law office even as he was recently honoured by the Ilorin Golf Club with enrolment on its Friends of Ilorin Golf Club’s Roll.

Below are statements on his activities.

DOING IT IN A GRAND STYLE: CHIEF JOE-KYARI GADZAMA SAN AND HIS EMINENT ENTOURAGE STORM THE NBA LAGOS BRANCH MEETING OF MAY 9, 2022

The meeting was jointly hosted by some friends of the leading litigator and arbitrator, including the African Bar Association (ABA) President, Mr. Hannibal Uwaifo and two former chairmen of the NBA Lagos Branch, Mr. Chijioke Okoli SAN and Otunba Martin Ogunleye, all in honour of Chief Joe-Kyari Gadzama SAN.

It would be recalled that Kunle Ogunba & Associates sponsored the NBA Lagos Branch meeting held on December 13, 2021, in collaboration with J-K Gadzama LLP whilst Chief Bolaji Ayorinde of BA Law extended the same honour to Chief Gadzama by sponsoring the General Meeting of the Lagos Branch held on March 14, 2022.

This month’s meeting was a rainbow of activities as members of the Branch attended in their numbers, and participated in the various deliberations listed in the agenda issued by the Branch.

The Chairman of the Body of Benchers Mentorship Committee for Young Lawyers, Chief Joe-Kyari Gadzama SAN was specially recognised by the NBA- Lagos Branch Chairman, Mr. Ikechukwu Uwanna and thereafter requested to lead the cutting of the cake for the month of May Celebrants. The meeting ended with photo sessions, never-before assorted foods, drinks, and music, much to the delight of everyone.

Recall that Chief Gadzama, SAN submitted his Nomination Form at the ECNBA Secretariat on April 14, 2022 indicating his interest to contest for the position of NBA President in the forthcoming NBA national election.

The NBA President, Mr. Olumide Akpata, appointed Chief Gadzama, SAN as the Chairman of the NBA Security Agencies Relations Committee (NBA-SARC) last year December and the Committee was only inaugurated early this year. Prior to his appointment, Chief Gadzama, SAN had served the NBA in various capacities including but not limited to the following:

One of Nigeria’s foremost lawyers and Senior Advocates of Nigeria, Chief Joe-Kyari Gadzama, SAN has bagged yet another honour at the Ilorin Golf Club, Kwara State as the Club enrolled the learned Silk on the Friends of Ilorin Golf Club’s Roll. This honour comes owing to the immense contributions of the Learned Silk to the Club and his immeasurable passion for golf. The honour comes shortly after Chief Joe-Kyari Gadzama, SAN’s name was enrolled on the NBA Ilorin Roll of Honour Board at the NBA Ilorin Bar House.

Chief Joe-Kyari Gadzama, SAN while spending his Sallah holiday at Ilorin, Kwara State could not keep off the sport as he paid a visit to the Ilorin Golf Club where he was warmly received by members of the Club amongst which were: Honourable Justice Akanbi Lambo (rtd) of the Federal High Court (Chairman Board of Trustees of the Club), Abdulganiyu Lambo (Captain), Rasheed Okunola (Bar Secretary of the Club), Dayo Ojerinde (Treasurer), Ishiak Majeed (Competition Secretary), K. K. Muhammed (Caddy Officer), Adedibu Ojerinde, Abubakar Alaba Yahaya to mention a few.

Joe-Kyari Gadzama, SAN, outside the Courts, lawyering, Arbitration and negotiation tables is renowned for his flair for various sports ranging from table tennis, swimming, basketball, football amongst many but none seem to have gotten quality much of his flair like golf. The learned Silk has proved not only to have attained leadership capacities at the legal profession but also in the management of golf as he has been a two time Captain of the IBB International Golf and Country Club, Abuja amidst many great.

The firm, which has been in Lagos since the mid 90s, recently moved from its office at 136 Awolowo Road, South West Ikoyi to No. 2, Bourdillon road, opposite the new Federal High Court Complex, Ikoyi, Lagos State. We understand that the firm was initially at 10, Ribadu before moving to 8A, Ribadu and then to Marble House, Falomo. Indeed the firm’s Abuja office was produced by the Lagos office.

On Monday, May 9, 2022, the Founding Principal Partner of the firm, Joe-Kyari Gadzama SAN invited a few friends to witness the dedication of the office.

During the event, the President of CLASFON, Caretaker Chairman of Egbe Amofin and a former Chairman of NBA-Ibadan branch, Prof John Oluwole prayed and dedicated the office to God.

We understand that the Learned Silk will do a grand office warming party in Lagos later this year. After the marvelous NBA-Lagos branch meeting organized in his honour, we are confident that Lagos Lawyers will be eager to attend the official office warming.