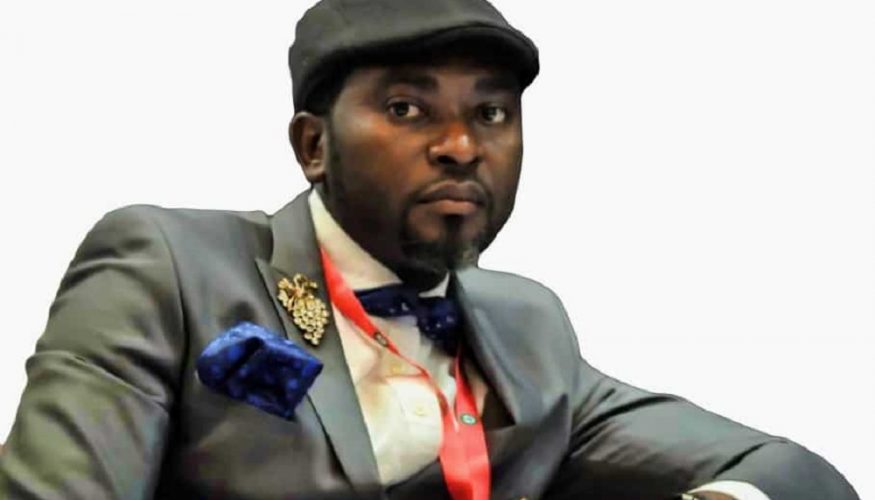 An Owerri based lawyer has urged the Electoral Committee of the Nigerian Bar Association (ECNBA) to bar NBA Publicity Secretary aspirant and current Secretary of NBA Welfare Committee, Mr. Ogaga Emoghawanre from further participation in the forthcoming National Officers Elections.

In the petition obtained by CITY LAWYER, the petitioner, Mr. Francis Ugwumsinachi alleged that Emoghawanre, a leading aspirant for the prominent post, is “not qualified to contest for the office of the Publicity Secretary of NBA in the forthcoming election.”

However, NBA Owerri Branch leadership has written a disclaimer to the ECNBA disowning the petitioner, saying he is not a member of the branch.

Ugwumsinachi had in the petition dated May 4, 2022 vowed that he is “a bonafide member of Owerri Branch and by virtue of same, I will be affected by the outcome of the conduct of 2022 NBA National Elections.”

Continuing, the young lawyer wrote: “Sir, Ogaga Emoghawanre Esq. by our understanding of the provisions of the NBA Constitution is not qualified to contest for the office of the Publicity Secretary of NBA in the forthcoming election.”

According to the petitioner, “His tenure as the Publicity Secretary of NBA will expire in June 2022. As at the time of collecting and submitting of his nomination form (21 March- 15th April 2022), he had not been in office for 2 years as prescribed by the constitution of our great NBA.”

He asserted that “It will be a miscarriage of justice if Ogaga Emoghawanre esq (sic) is qualified to contest in the face of manifest precedent,” arguing that former NBA Assisatnt Publicity Secretary Habeeb Akorede Lawal suffered the same fate in 2020 when he was disqualified by the ECNBA allegedly on the same grounds.

But in a letter dated May 9, 2022 and addressed to the ECNBA Secretary, the NBA Owerri Branch leadership described Ugwumsinachi’s claim of being a bonafide member of the branch as “spurious.”

Signed by Messrs Jude Ogamba and Chinedu Agu, the branch chairman and secretary respectively, the branch leadership said: “We have gone through our records to discover, much to our consternation, that the said Ugwumsinachi Francis Ajuruchi has never been and is currently not a registered member of our Branch, and therefore is not a person known to our Branch as such.”

This has however set off a controversy in the branch, with the petitoner threatening to head to court to clear his name. He told CITY LAWYER that the Branch Secretary has urged him to “calm down” as the matter would be amicably resolved soon.

“He sent an inbox message to me assuring me that he would issue an apology letter and a withrawal letter to ECNBA,” he said. “If that is not done, I will go to court to clear my name.”

Continuing, the Branch YLF Chairman said: “I do not know how they investigated to say that the young lawyer is not a member of the branch. I don’t believe that we should engage in politics as to deny our own member. Meanwhile, he did not write on behalf of the branch. He is a bonafide member of the branch. We are patiently waiting for the branch leadership to issue him an apology letter and withdraw the purported disclaimer.”

When CITY LAWYER contacted the Branch Chairman, he said: “We have written to the ECNBA. If there is an error, it will be remedied.”

When CITY LAWYER pointed out the petitioner’s claim that the Branch Secretary promised to withdraw the disclaimer, Agu said: “If that is the position of the secretary, he should know. I saw a picture he (petitioner) took with the Branch Secretary. We will not want to injure anyone. Recall that we are transiting from analogue to digital records. We would look at every record. In our branch, we have a procedure for obtaining membership. I have asked the appropriate officers to look at our records again.”

On his part, the Branch Secretary told CITY LAWYER that the disclaimer stands until the branch concludes its enquiry into the petitioner’s membership status. His words: “No such (withdrawal) letter will be issued without a further deep-pocketed inquest into the validity or otherwise of his membership. This inquest is underway.” Reminded that he had assured the petitioner of such a letter and an apology in a message sighted by CITY LAWYER, he said: “Letter of Disclaimer was an official Letter.”

It was unclear at press time if the electoral committee had taken a decision on the petition. 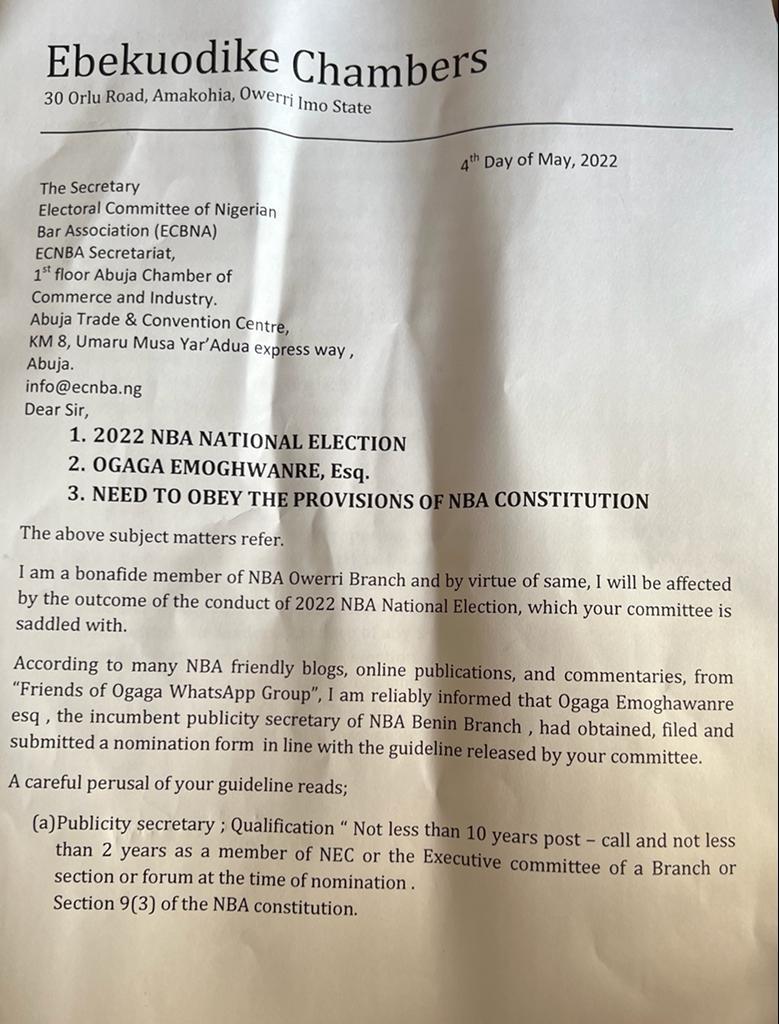 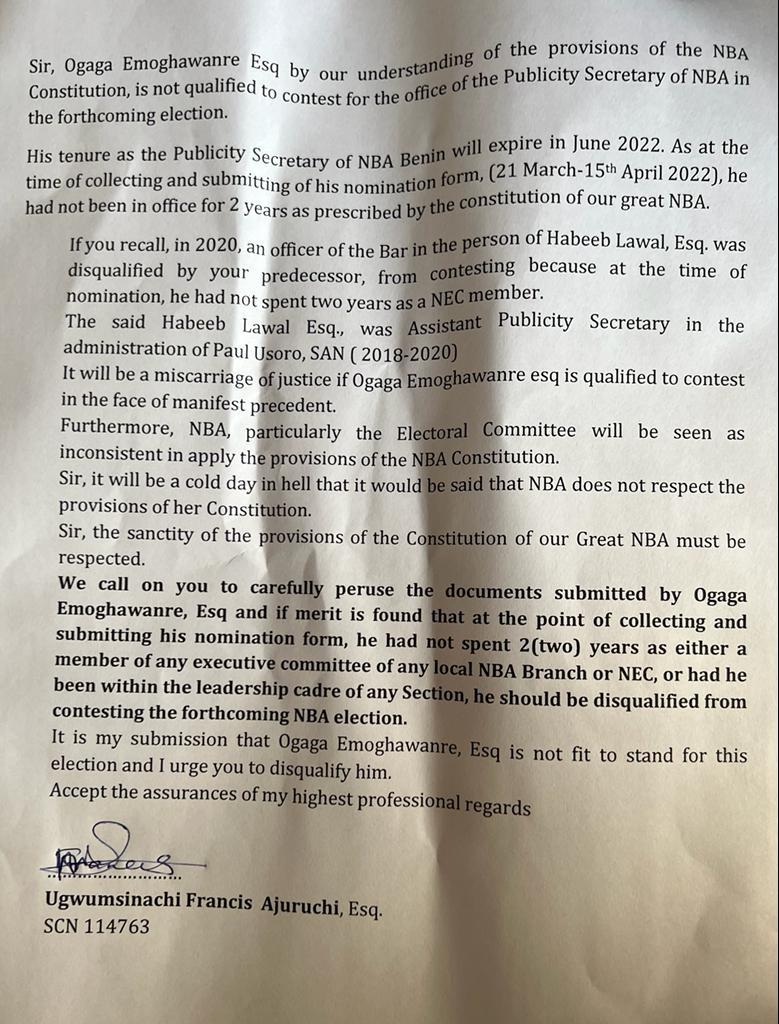 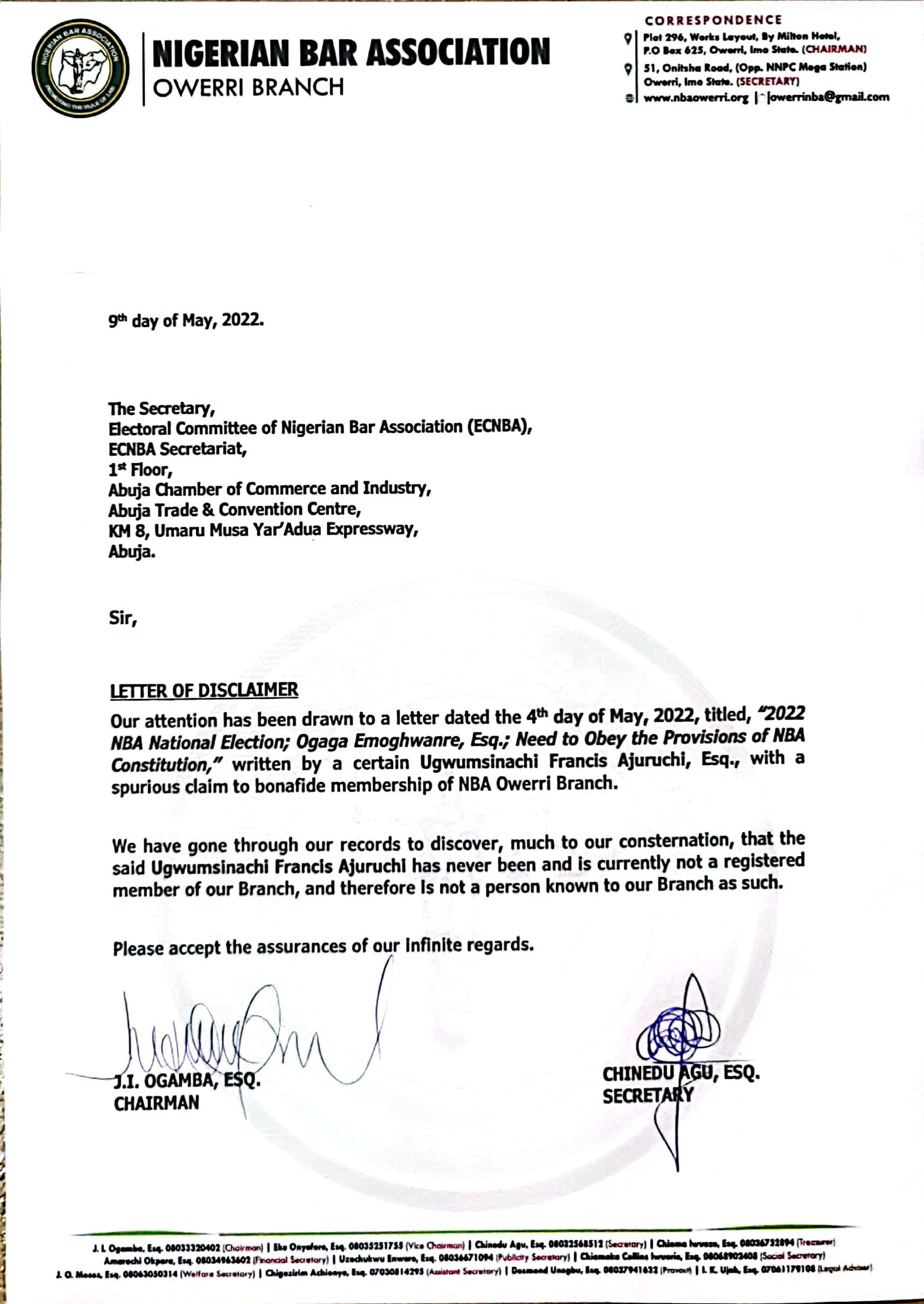