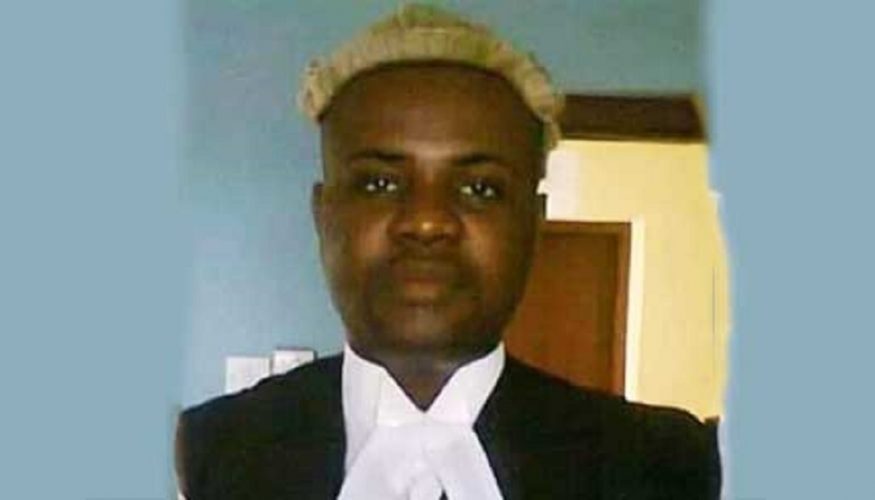 RE: WHETHER SECTION 8(8) OF THE NBA CONSTITUTION IS SELF-EXECUTING ON LOSS OF NBA-NEC MEMBERSHIP (PART 1)

I am compelled to publicly respond to the above captioned article written by Sylvester Udemezue in which he stated that there is no condition requiring that the NEC must (by a resolution or other independent decision) declare such NEC member’s seat vacant before the provisions of section 8(8) would apply. I look forward to reading from Udems (as he is commonly known) as I am always enriched by his in-depth and incisive writings. Unfortunately, the article under reference happens to be one of the few occasions I will strongly disagree with the learned law teacher as to publicly reply him .

According to Udems such a member’s seat will automatically become vacant provided the following conditions are present:
a) He absented himself from NEC meeting on at least three consecutive occasions;

b) He either didn’t write the NEC to give “reasonable cause” for his absence at such proposed or past meeting(s) or he had actually written to the NEC, but the NEC had considered such explanation unsatisfactory.
Let me start by noting that if Udems’ position, that a member who fails to attend three consecutive meetings of NEC would automatically lose his/her membership without the need for any hearing, were to be the correct position, then that would equally mean that NEC would automatically withdraw the recognition of any Branch where the membership falls below fifty members in good financial standing for two consecutive years.

It should be noted that the word automatically was not used in the Constitution, but had been used quite liberally by Udems. Indeed, if it was the intendment of the NBA Constitution to make the provision of that sub-section automatic, the drafters would have chosen words which show such intention clearly without ambiguity. I will make reference to a few provisions in the NBA Constitution to buttress this submission:

1. Article 18(2) of the Third Schedule (Uniform Bylaws) provides that “Except otherwise resolved at a General Meeting, all Standing and Ad-hoc Committees of the Branch shall automatically become dissolved upon the swearing-in of the new elected officers”.

2. Article XVI(b) of Part II, Third Schedule (Uniform Byelaws for Sections) of the Constitution provides “In the event of any Officer or any other member of the Executive Committee of the Section ceasing to be a member of the Section, he or she shall cease to hold office in the Executive Committee of the Section and his or her seat shall automatically fall vacant”.
To succeed in his argument Udems would have to discharge the onerous burden of showing how Section 36(1) of the 1999 Constitution would not apply in this circumstance or how the section obviates the need to afford an affected person the right to be heard before he/she loses his membership of NEC. Until he shows how the mandatory constitutional stipulation that in “the determination of his civil rights and obligations, including any question or determination by or against any government or authority, a person shall be entitled to a fair hearing within a reasonable time by a court or other tribunal established by law and constituted in such manner as to secure its independence and impartiality’ cannot be read into Section 8(8) of the NBA Constitution. As held by the Supreme Court, per KARIBI-WHYTE, JSC (Pp. 27 – 28, paras. F – D) in Adeniyi v. Governing Council of Yaba College Of Technology (1993) LPELR – 128 (SC) “I do not think any proposition can be more clearly established in the administration of justice. There is no doubt that no determination involving the civil rights and obligations can be properly made, until the person whose civil rights and obligations maybe directly affected, has been notified of the matter and given the opportunity of answering the case against him.”

Perhaps it was the writer’s inability to show that right to fair hearing does not inure to a person affected by Section 8(8) of NBA Constitution that led to reference to many company practices that are unrelated to the subject, like – what is the essence of notice of meetings, effect of the portion of the usual Minutes of Meeting known as “Apologies” etc.

If only was that simple. It is my respectful submission that any attempt to suggest that any person who fails to attend three consecutive NEC meetings would automatically lose his membership, does violence to the wordings of the provision which qualified same with the proviso that “unless he/she shows reasonable cause for such absence to the satisfaction of the Council”. I will desire your understanding to reproduce Section 8(8) of NBA Constitution:

(8) Any member who is absent from three (3) consecutive meetings of the National Executive Council shall cease to be a member of the Council unless he/she shows reasonable cause for such absence to the satisfaction of the Council:

I will now break down the provision into its component parts to expose the fallacy in the submission.
1. It applies ONLY to any member who is absent from three (3) consecutive meetings of the National Executive Council;
2. Such a person will be punished with cessation (loss) of membership of the Council;
3. The cessation or loss of membership of the Council will not happen unless he/she fails to show reasonable cause for such absence to the satisfaction of the Council:

The suggestion that there is no need for a hearing will no doubt be a product of misconception of the provision. If we ponder on the following questions, we will understand why his position cannot be the correct position of the law or even a proper interpretation of the Constitutional provision:

1. Is it not only a person who has absented himself/herself from three (3) consecutive meetings of the National Executive Council that is expected to show “reasonable cause for such absence to the satisfaction of the Council”? – Of course.

2. Is a member who has not absented himself/herself from three (3) consecutive meetings of NEC, at any risk of losing his/her membership? Not at all

3. Does the Constitution require a person who has not absented himself/herself from three (3) consecutive meetings of NEC to show “reasonable cause for such absence to the satisfaction of the Council”? – Not at all.

4. Of what use will a reasonable cause shown when the person stands to suffer no loss of membership, be in the context of Section 8(8)? – Totally unnecessary.

5. Is the correct interpretation of Section 8(8) not one which requires ONLY an affected person, (i.e. person who has absented himself/herself from three (3) consecutive meetings of NEC) to show “reasonable cause for such absence to the satisfaction of the Council as to why he/she should not cease to be a member of the Council (NEC)? – Of course, it is.

6. Is it not in accord with common sense that it is only when a person is about to lose his/her membership that such explanation would be required in the determining he/she would continue to retain his membership? – Of course, it is.

The fact that a person who misses one meeting or even two consecutive meetings, will suffer no punishment, shows that NO explanation would be required of such a member in the context of Section 8(8) as he/she runs no risk of losing NEC membership. To conclude otherwise would only turn logic on its head. Indeed, any other interpretation would amount to doing violence to letter and spirit of the Constitution. No reference to articles on the essence of sending apologies or how to do so would make the argument right. I insist that before NEC can take any adverse decision against any member who allegedly failed to attend three consecutive NEC meeting, NEC must accord him/her the right to fair hearing as guaranteed by Section 36 of the Constitution.

I suspect that the writer fell into error in arriving at the conclusion by proceeding on the wrong premise that a lawyer becomes a member of NEC by “appointment”. The submission is clearly not in sync with the provisions of the NBA Constitution, and I will show how it adversely affected the thinking. Section 8(1) of the Constitution provides that the NBA NEC shall comprise the following:
a. National Officers;
b. All past Presidents and General Secretaries;
c. All Chairmen and Secretaries of registered Branches;
d. Chairmen and Secretaries of Sections and Fora;
e. Other deserving members of the Association co-opted by the National Executive Council provided always that the total number of the co-opted members shall not exceed 150 (one hundred and fifty) the composition of which shall be as follows:
i. Senior Advocates of Nigeria – 30;
ii. Senior Members, other than Senior Advocates of Nigeria, who are over 25 years post call – 30;
iii. Active members of 10 years post call but below 25 years post call – 45
iv. Past National Officers other than Past Presidents and General Secretaries – 10
v. Special interest groups – 20
vi. Active members who are less than 10 years post call – 15

It is my respectful submission that the learned writer misconceived the provisions of the NBA Constitution as well as the imperativeness of affording any affected member a fair hearing before he/she can lose his/her membership of the National Executive Council (NEC) of NBA. According to him “section 8(8) of the NBA Constitution appears to impose a Volenti Non Fit Injuria Rule which operates automatically without any (further) action required on the part of anyone, once the necessary preconditions are present”.

He regrettably fell into error when he submitted that in his “opinion, the necessary implications of section 8(8) of the NBA Constitution is as follows: 1) A Lawyer who is appointed a NEC member and who is absent at NEC meetings on three consecutive occasions, loses his membership of NEC unless there exists a “reasonable cause” for such an absence to the satisfaction of the NEC”.

Will such a conclusion not leave fair-minded and due process advocates, scratching their heads? Udems, cannot therefore be right. As lawyers, I am very certain that we should NOT be the ones suggesting that the right to fair hearing which is clearly stipulated in Section 36(1) of 1999 Constitution and Section 8(8) of the NBA Constitution should count for nothing. As stated by Fortescue J. in R v. CHANCELLOR OF CAMBRIDGE (1723) 1 Strange 557

“The laws of God and man both give the party an opportunity to make his defence, if he has any. I remember to have heard it observed by a very learned man upon such an occasion, that even God himself did not pass sentence upon Adam, before he was called upon to make his defence. Adam (says God) where art thou? Hast thou not eaten of the tree, whereof I commanded thee that thou shouldst not eat? And the same question was put to Eve also.

I can only safely conclude that anything short of affording a fair hearing to any NEC member who is absents at NEC meetings on three consecutive occasions, will violate Section 36(1) of the 1999 Constitution. No member of NEC can rightly lose his/her membership there has been a opportunity given to him/her to show that there exists a “reasonable cause” for such an absence to the satisfaction of the NBA-NEC.