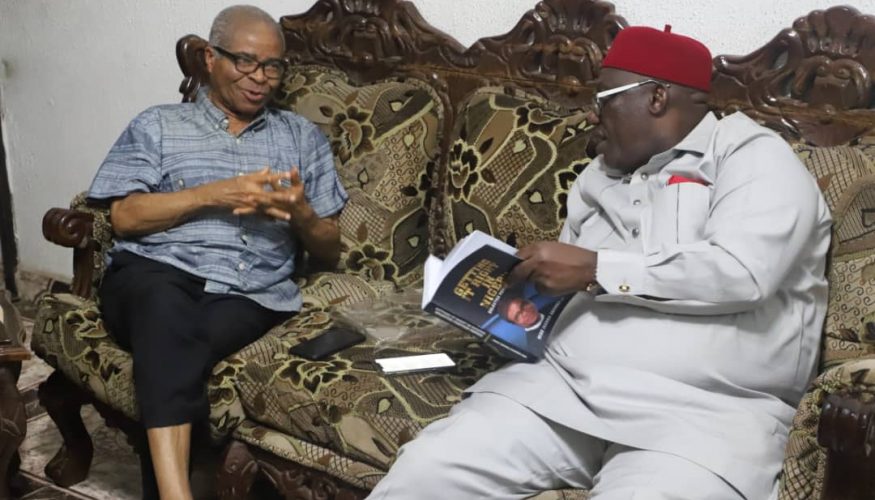 One of the leading aspirants for the post of the Nigerian Bar Association (NBA) Presidency, Chief Joe-Kyari Gadzama SAN has paid courtesy visits to the Chief Judge of Ebonyi State, Justice Nicholas Nwode.

Below are statements on the visits.

Recently, Chief Joe-Kyari Gadzama, SAN and his entourage paid a courtesy visit to the almost completed NBA Bar House in Ebonyi State. The Learned Silk made the courtesy call with the Chairman, NBA Abakiliki Branch and Former Governor, Eastern Bar Forum. The Branch Chairman, Barr. Okorie gave the Learned Silk a tour around the facility. The Learned Silk, delightfully professed his satisfaction with the level of development of the NBA Abakiliki Bar and urged the Leadership to continue making giant strides towards improvement.

The Learned Silk then took courtesy photographs with everyone present and proceeded to the residence of the Chief Judge of Ebonyi State, Hon. Justice. Nicholas Nwode.

The Honourable Justice thanked everyone for the courtesy visit and entreated all to continue making efforts towards the achievement of a free and fair society where justice and the rule of law prevails. Group photographs were taken thereafter and the Honourable Justice bidded the visitors farewell.

“EQUITY SEES AS DONE THAT WHICH OUGHT TO BE DONE…,” PROF. F. C DIKE, SAN AND OTHER VETERANS OF NBA OWERRI BRANCH SUPPORT ASPIRATION OF JOE-KYARI GADZAMA, SAN

The Eminent Silk and Professor of Law, welcomed J-K Gadzama, SAN to his residence, exchanged pleasantries and addressed the lawyers in the Learned Silk’s entourage. According to the Learned Silk, Joe-Kyari Gadzama is a household name in the service of the NBA. He gave his assurance to the Learned Silk, saying, “Equity deems as done that which ought to be done. By the Grace of God, your aspiration is already a reality because, it ought to be as you’re well qualified and experienced”.

Prof. F. C Dike, SAN further assured that all hands would be on deck and the relevant persons would be addressed to see that the vision of Joe-Kyari Gadzama, SAN for the Nigerian Bar comes to fruition.

Joe-Kyari Gadzama, SAN also visited the residence of Mike Ahamba, SAN where he was delightfully welcomed by the Learned Silk’s family. Both Silks interacted extensively on the welfare of the NBA and the future of the Nigerian Legal Profession. Learned Silk, Mike Ahamba, SAN gifted an autographed copy of his book titled, “Getting it Right in Nigeria”, to Chief Joe-Kyari Gadzama, SAN. He also assured the veteran Bar Patriot of his support.

Joe-Kyari Gadzama, SAN greeted Chief Mogboh, SAN thanking him for the audience granted them and explained that he had come to get the blessings and support of the Enugu Bar to assist him in implementing his ideas for the Nigerian Bar. According to Joe-Kyari Gadzama, SAN the Nigerian Bar Association being umbrella Association for legal practitioners in Nigeria could implement a lot of changes in the Nigerian society by creating platforms where the older and more experienced Lawyers can inculcate virtues in the Young Lawyers who being the future of the Nation, can better implement same to see the achievement of a better society.

Chief A.O Mogboh, SAN thanked the Learned Silk for coming and asked him to continue the good work of mentorship to the young lawyers and support the course of the NBA.

The Chairman of NBA Enugu Branch Jude Ezegwui in his remarks stated that J-K Gadzama, SAN is an honorable man of the Bar, credible and competent to take the affairs of the Bar to next level. He reiterated his undeniable support for him, his believe that he has all the qualities of a good leader and not scared to show his support as he will not fail the Bar. He further appealed to everyone there present to support him in order to actualize what he has to offer.

In addressing the attendees, J-K Gadzama, SAN ceded the floor to Douglas Ogbankwa, Esq. who thanked all the attendees and the event planners for the wonderful dinner.
He commended Mrs. Chinwe Mbah and her crew for the special Igbo delicacies.

Engr. Chinwe Mbah also expressed her gratitude for the warm visitation and stated that she has heard good remarks about J-K Gadzama, SAN and would urge every lawyer to support him to the fullest.