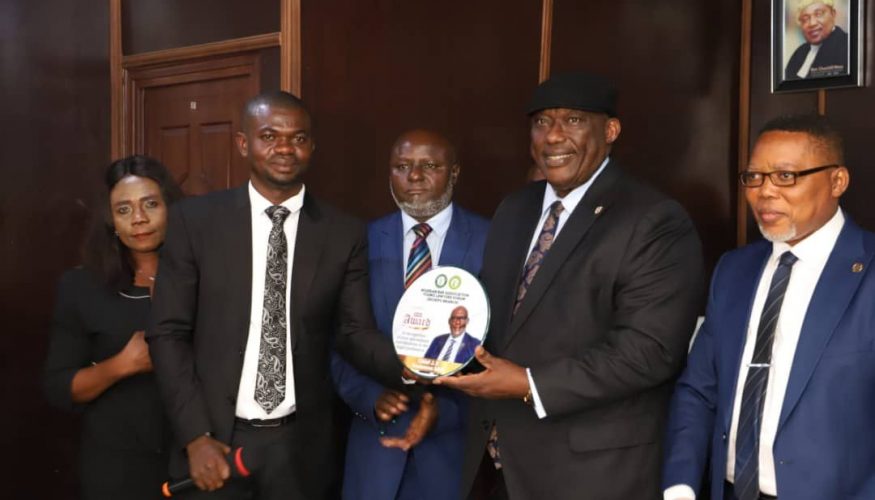 The branch specially designed a banner which was strategically placed to welcome only Chief Joe-Kyari Gadzama, SAN and his entourage to the branch. Mr. Morris Kipe Alali, Esq., the chairman of the NBA, Ahoada branch personally welcomed the Learned Silk and gave him an opportunity to address members of the branch. The Learned Silk thanked the branch for the hearty and elaborate welcome he received.

“This is not my first time here. I was here several years ago and I will be here again” Chief Joe-Kyari Gadzama, SAN said while informing members of the branch that Rivers State is home to him as he is an adopted Rivers State man.

“Collectively, we can work together to improve the Bar and take smaller branches to the next level,” Chief Joe-Kyari said while commending the branch for their rapid growth.

He urged members of the branch to actively participate in initiating ideas that positively affect the branch and the Bar at large. The Learned Silk who has proven that mentorship of young lawyers is very dear to his heart through the Hon. Justice Chukwudifu Oputa JSC (Rtd) Mentoring Program of J-K Gadzama LLP, noted that he shall continue to take steps that are directly aimed at bettering the legal profession, particularly capacity building for the young lawyers.

NBA YLF, ISIOKPO BRANCH HONORS CHIEF JOE-KYARI GADZAMA, SAN WITH AN AWARD FOR HIS REMARKABLE CONTRIBUTION TO THE LEGAL PROFESSION

The Keynote Speakers at the event were: Chukwuka Ikwazom, SAN, Partner at Aluko & Oyebode; Dr. Hon. Cashmia Ofurum; Mr. Ogbonna Goodluck Ogbom, Esq.; and Mr. Nweke Prince Nweke, Esq. They all delivered justice to the theme of the seminar as they selected different areas of law to concentrate on such as: entertainment law, financial technology, land law, intellectual property law and several other emerging areas of law. Other distinguished guests who were at the event include: High Chief Lukeman Ihua, past chairman, NBA, Isiokpo branch and Hon. Churchill Wosu, pioneer chairman, NBA, Isiokpo branch.

We could tell that the Learned Silk was overwhelmed with excitement as the award was being presented to him. He expressed his immense gratitude to both the leadership and members of the branch. He noted that he was encouraged by the creativity of the NBA YLF, Isiokpo branch. He commended both the past and present leadership of the branch for the growth of the branch and noted that they had done a good job with the younger generation of lawyers in the branch.

Furthermore, he urged all present to take steps towards the development of the Bar as that duty remains a collective one. He implored the older generation of lawyers to participate in improving the welfare and remuneration for young lawyers. He saluted the incumbent president of the NBA, Mr. Olumide Akpata and the president of the NBA Remuneration Committee, Mr. Anthony Nwaochei for the steps taken by the administration to improve the remuneration for the legal profession. He reiterated the point made on specialization for young lawyers by Mr. Chukwuka Ikwazom, SAN. He urged the young lawyers present to center their legal practice around two to three areas of law as this shall influence the success of their legal practice.

The Learned Silk and a group of other lawyers attended the final football match organized by the NBA, Yenagoa branch for their 2022 law week between Wuku FC and Ambaowei FC.

The Learned Silk who attended the football match between the two teams at Joseph Beredugo International School received a positive reception from members of the branch.

This is the second match of the NBA, Yenagoa law week that the Learned Silk has witnessed in his short visit to Bayelsa State. Yesterday, he witnessed the match for third place between Dambo FC and Ayabowei FC wherein Dambo FC emerged as the winner with a score line of 2-1.

The Learned Silk’s interest in the football game is not out of place as he is indeed a fervent supporter of the game and an energetic sportsman. Recently, he sponsored his football team, Gadzama FC during the 2022 Abuja Lawyers’ League where the team came in third place at the league. He is the chairman of Gadzama FC; incumbent vice chairman of the Bar and Bench Golf Tournament; a trustee of Hon. Seriake Dickson Golf and Country Club in Yenagoa and also, a member of the Bayelsa State Sports Committee headed by His Royal Majesty, King Alfred Diete-Spiff.