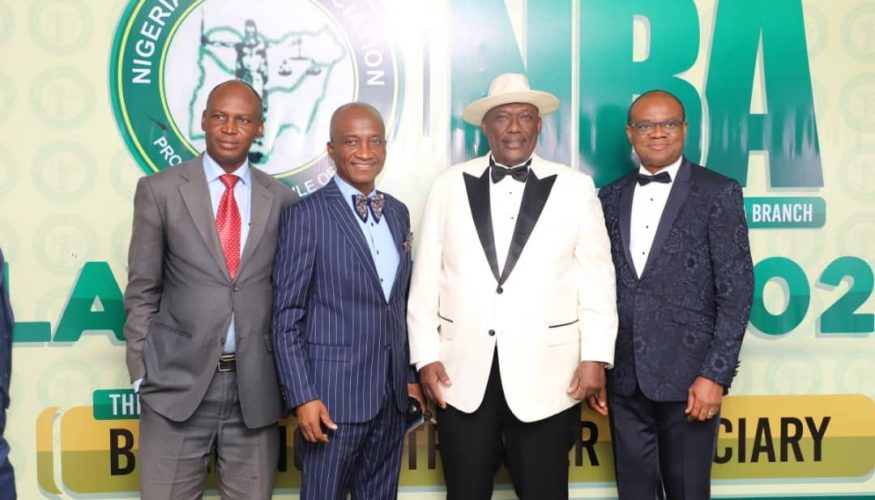 GADZAMA IN PARTY WITH NBA BAYELSA LAWYERS AT GOV’T HOUSE

The NBA, Yenagoa branch hosted a dinner on Saturday, May 28, 2022 in celebration of their 2022 law week at the DSP Alamieyeseigha Memorial Banquet Hall, Yenagoa, Bayelsa State.

Learned Silk, Joe-Kyari Gadzama, SAN was in attendance at the dinner as he was to deliver the dinner talk at the event. According to Helen Keller, “alone we can do so little; together we can do so much”. In that wise, a group of lawyers from the NBA, Port Harcourt branch accompanied the Learned Silk who is a presidential aspirant of the NBA to the dinner. The lawyers who accompanied the Learned Silk to the dinner include: Mr. Nyesom Chinda; Mr. Victor Agala; Mrs. Anthonia Osademe, vice chairman of NBA, Port Harcourt branch; Ms. Sophia Ugwuorah; Ms. Sarah Apia; Mr. Ebuka Samuel; Mr. Akuro T. Enoch; Mr. Adebayo Williams; Mr. Godsent Elenwa; Mr. Evidence Asite Agbor; Ms. Harmony Chikodili; Mr. Wejinya Azubuike A; Mr. Nwaiwu Patrick; Ms. Pepple Vanessa; Mrs. Atonye Ezekiel-Hart; Ms. Sophia Nwenekorum; Mr. Ezechimenum Adums; Mr. Obinna Victor; Mr. Anaeli King; Mr. Dafenone Akpomudiare; Ms. Hillary Ayebaifie Ojeke amongst many others.

The Learned Silk was duly recognized as a distinguished guest at the dinner by the MC and chairman of the occasion, Mr. Kemasuode Wodu, SAN.

“I am a son of the soil for some of you who may not be aware and I am always happy to come back home. I consider this opportunity a great honor and privilege and I am grateful to the leadership and all members of the branch who found me worthy to deliver the dinner talk” the Learned Silk said while expressing his gratitude to the branch. His dinner talk was compendious but it is worthy to note that no stone was left unturned as he touched on the relevant areas in relation to the topic.

At the end of his dinner talk, he implored the older generation of lawyers to create room for mentorship programs for young lawyers. He saluted the branch for the success achieved with their 2022 law week and urged them to keep up with their efforts towards ensuring the growth of the branch and the Bar.

The dinner provided a great atmosphere for networking as the lawyers from the yenagoa branch and other neighboring branches interacted with one another while feasting on the delicious meals served and taking sips from their drinks.

FRIENDS OF J-K GADZAMA, SAN AND THE LEARNED SILK DANCED THE NIGHT AWAY AT THE BAYELSA STATE GOVERNMENT HOUSE

Friends of J-K Gadzama, SAN who belong to the NBA, Yenagoa branch organized an outdoor poolside party for the Learned Silk and his guests at the Bayelsa State Government House. The party took place on Saturday, May 28, 2022 immediately after the branch’s dinner at the DSP Alamieyeseigha Memorial Banquet Hall.

The Learned Silk noted that the party was an opportunity to network and unwind. He definitely had a good time as he was seen dancing with his good friend, Hon. Nimi Walson Jack, past general secretary of NBA; Mrs. Anthonia Osademe, vice chairman of NBA, Port harcourt branch; Mr. Ukumbiriowei Saiyou, chairman of NBA, Yenagoa branch and other young and senior lawyers who attended the event.

A reliable source informed us that the party turned out well as more than 150 lawyers who had big smiles on their faces partied with the Learned Silk as a show of their support to his NBA Presidential ambition. The dance floor was busy; drinks and chops were also provided for all those who attended.

With so much happiness, the Learned Silk thanked the branch for the selfless service he received throughout his stay. He also thanked his guests from the NBA, Port Harcourt branch who came all the way to attend the dinner and party with him.