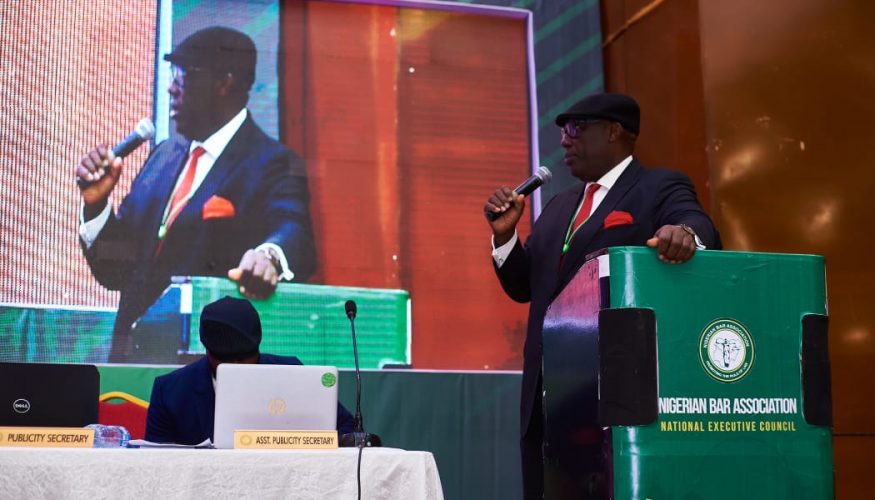 ENCOMIUMS AS THE JOE-KYARI GADZAMA-LED NBA-SARC PRESENTS ITS REPORT TO NBA-NEC, MAKES BOLD RECOMMENDATIONS FOR IMPROVED SAFETY OF LAWYERS

At the Nigerian Bar Association – National Executive Council (NEC) meeting, held at Ilorin on Thursday, June 9, 2022, the chairman of the NBA- Security Agencies Relations Committee (NBA-SARC), Joe-Kyari Gadzama SAN, presented the report of the NBA- SARC, highlighting the streak of successes, strives, strides and achievements of the NBA-SARC, in less than 6 months of its inauguration, stating that within the period of six months of the inauguration of the NBA-SARC, the Committee has successfully intervened in over 15 cases involving legal practitioners and security agencies across the country.

Chief Gadzama stated further that apart from the NBA-SARC’s interventions, it has also organised a Townhall Sensitization Webinar where it created awareness of its mandates. On Saturday, February 19, 2022, the NBA-SARC also organized a roundtable discussion with executives of the NBA branches and thereafter followed up with a virtual townhall sensitization for young lawyers, this is to create a consciousness of its mandate and also to discuss issues bothering on safety and welfare of legal practitioners.

The NBA-SARC has also participated in the CLEEN Foundation Methodology Workshop ahead of the Police Reform Audit in Nigeria, an event which was held on May 18, 2022, at the NBA-Secretariat, among a host of other events participated in, aim at championing improved welfare for the Nigerian Lawyers.

Speaking passionately, Chief Joe-Kyari Gadzama said there was a lot more to do as he itemized the several upcoming programs of the NBA-SARC. He noted that the NBA-SARC has also lined up a series of other hybrid programs, physical and online, directed at the sensitization of both personnel of security agencies and legal practitioners, viz Webinars, Workshops, Courtesy Visits, et al. tailored, ultimately, for an improved efficient and cordial relations with security agencies across the country, focally including the Nigerian Police Force.

In the NBA-SARC’s report as presented by Chief Joe-Kyari Gadzama, SAN, the following far-reaching recommendations for the improved safety of the Nigerian lawyers were made:

Chief Gadzama explained that this will provide a prompt complaint platform, more easily accessible to members of the NBA, at the various branch level. This will also help in the collation of harassment cases and intimidation against lawyers by security agencies, and importantly, the urgency with which they are dealt with. It is also worthy of note that the YLF provides an arsenal that can be empowered by the NBA to help in the fight against human rights abuses, thereby promoting public interest lawyering.

3. Preparation of a Code of Engagement for Lawyers in their Relations with Law Enforcement Agencies: Chief Gadzama explained that one of the mandates of the NBA-SARC is to “develop and promote proper protocols for engagement with security agencies by lawyers, in the course of carrying out their professional duties”. That the Committee has noted the need for a code that provides guidelines and/or protocols to aid lawyers in proper engagement with security agencies in the course of carrying out professional duties.

4. Need for the NBA-SARC to be a Standing Committee: The NBA-SARC Chairman explained that the NBA-SARC presently liaises with these security agencies with a view to stemming the ugly trend of harassment of legal practitioners and engendering a harmonious and mutually beneficial working relationship between members of the NBA and members of the various Security Agencies. This, Chief Gadzama, explained as an ongoing process and bridges of trust and mutual respect are presently being built. That as with bridges, it takes consistency, hard work planning and strategy to build. If the present drive to ensure the welfare and safety of legal practitioners is to be further entrenched and strengthened, that there is an urgent need to make the NBA-SARC a Standing Committee of the NBA so that there is continuity in the works of the Committee, so that the efforts made so far, do not go down the drain and that the momentum set by this Akpata-led administration is sustained.

5. The Need for Yearly Workshop or Town Hall meeting with Law Enforcement Agencies: The successes recorded at the 1st Hybrid Townhall Meeting of the NBA-SARC held on the 5th day of April, 2022, at the Auditorium of the NBA National Secretariat, Abuja should be sustained. Chief Joe-Kyari Gadzama explained that the floodgate of feedback at the said maiden Hybrid Meeting, jointly emphasize the need for frequent liaisons and/or interaction between the Bar and the security agencies and that there was a need for more of such meetings to foster a cordial relationship between the NBA and security agencies across Nigeria. The Gadzama-led Committee has therefore reiterated the need for a yearly workshop and/or Town-hall meeting with law enforcement agencies across the country.