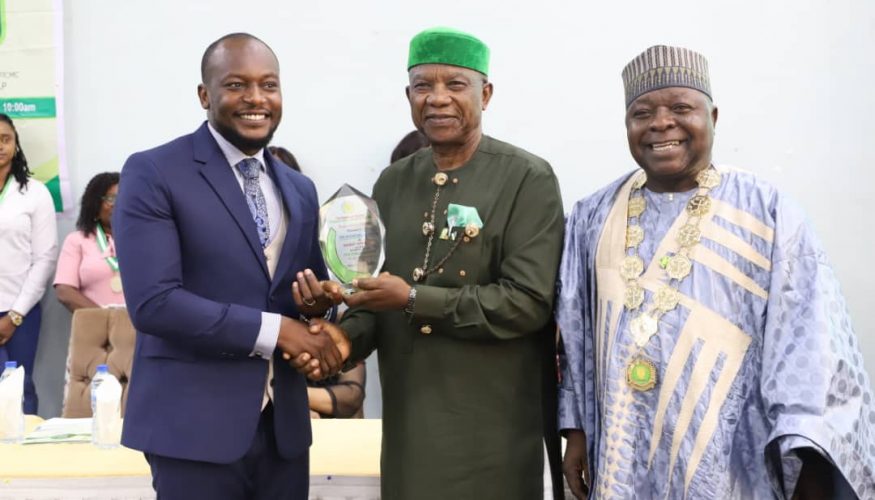 LEGAL LUMINARY, JOE-KYARI GADZAMA, SAN DELIVERS A LECTURE AT THE 2022 MID YEAR MEETING/PUBLIC LECTURE AND PLENARY SESSION OF THE BOARD OF FELLOWS, PHARMACEUTICALS SOCIETY OF NIGERIA

The Board of Fellows of the PCN held their 4th Public Lecture themed “HARNESSING THE POTENTIALS OF FELLOWS OF PROFESSIONAL BODIES IN NIGERIA FOR NATIONAL DEVELOPMENT: PHARMACISTS’ PERSPECTIVE” on 28th June, 2022.

The Lecture, which was chaired by the Hon. Minister of State for Budget & National Planning, Prince Clem Agba, featured a distinguished Senior Advocate of Nigeria, Chief Joe-Kyari Gadzama as the Guest Speaker.

The Learned Silk, ably represented by a Partner in the law firm of J-K Gadzama LLP, Madu Joe-Kyari Gadzama delivered a rich and insightful paper which was well received by the Fellows who paid rapt attention.

The Learned Silk received a standing ovation from members of the high table at the end of the interesting lecture.

The Chairman, Body of fellows Pharmaceutical Society of Nigeria, Pharm. Dr. Joel E.B. Adagadzu FPSN FPCPharm in his vote of thanks, appreciated Chief Gadzama while stating that the body is grateful that the Learned Silk could find time in his busy schedule to honour their invitation. He prayed for the Learned Silk and wished him well in his aspiration.

A President aspirant in the just concluded PDP presidential primaries, Mazi Sam Ohuabunwa, while presenting an award on behalf of Board, commended the Learned Silk and his representative for an insightful lecture.

The session kick-started officially with opening remarks being led by Mr. I.O AlHassan (Chairman, NBA Lokoja Branch) who stated that the Bar Patriot, Joe-Kyari Gadzama, SAN was someone who had made laudable contributions to the NBA. “Your contributions precede you. Even before becoming a lawyer, I had always heard of your name and have come to realize and admit that you’re a great man by all standards”, he said, speaking to the Learned Silk. He welcomed all the attendees and members of the Learned Silk’s entourage, reassuring that NBA Kogi State would support the candidacy of the Learned Silk and continue to make efforts towards spreading the news of the Learned Silk’s good aspirations for the Nigerian Bar.

Mr. Simon Musa welcomed the Learned Silk and addressed attendees on the importance of supporting him. According to him, Joe-Kyari Gadzama, SAN had been a household name and his contributions to the Nigerian Bar; especially the positive inputs made towards improving manner in which the NBA National Executive Council conducts it’s affairs were remarkable.

Mr. Siaka Odege, (Former Chairman, NBA Okene) speaking on behalf of the Okene Branch, thanked the attendees for taking time out to listen to the good aspirations of the Learned Silk for the NBA. He promised to support the cause of Learned Silk and urged everyone to do the same because the Learned Silk was one of them.

Thereafter, His Excellency, Former Governor of Bauchi State, Alhaji M.A Abubakar addressed the attendees. Speaking to them, His Excellency gave an excerpt of his profile saying. He explained that having been called to the Nigerian Bar in 1979 he had not seen anyone who’d given selflessly to the Nigerian Bar like Joe-Kyari Gadzama, SAN. He said, “…because of this, we fondly call him Mr. Mentorship. The office of J-K is like a mini Nigeria. He is a man who believes in capacity-building and gives everyone equal opportunities”.

Speaking on the credibility of the Learned Silk’s character, a Judge from the High Court of Kogi State refered to him as a colossus; a man of integrity, competence and high professional acumen and discipline.

Mr. Mela Audu Nunghe, SAN speaking on liberating the Nigerian Bar, stated that J-K Gadzama, SAN was a man whose will cannot be bent by political influence or monetary gains. He urged attendees to support the aspirations of J-K Gadzama, SAN because he was the best man for the job.

Mr. Mohammed Monguno, buttressed further on the character of Learned Silk, Joe-Kyari Gadzama, SAN. He said, “…having known J-K for about 40 years, attended the same primary school, university, and then being called to the Nigerian Bar together, I can attest to his impeccable character. J-K. In his office, 65% of lawyers are women and 70% are young lawyers. He is one who has passion to serve, I implore you to please give him the opportunity”.

Chief C.P Oli addressing the gathering asked the young lawyers to vote for someone who had their best interest at heart and had proven himself through impactful contributions overtime. He said, “I worked in the office of J-K as a young man from the South-East, he gave me an opportunity regardless I wasn’t from the North. I grew under his office and today I have my own office with about 20 lawyers working for me. Let us give quality leadership a chance”.

Mr. John Adele, SAN speaking to his colleagues and fellow members of the Lokoja Branch of the NBA explained that being a member of the committee which registered the NBA Lokoja Branch he could attest to the contributions of J-K Gadzama, SAN to NBA Lokoja. He urged the attendees to support him and then ceded the floor to Joe-Kyari Gadzama, SAN.

Joe-Kyari Gadzama, SAN thanked all the attendees for coming. He recounted his relationship with the NBA Branches in Kogi State and Kogi State generally; explaining how he started his my primary school education in Kainji, New Busa now in Niger State but Formerly in old Kwara State including Kogi and how his cousin Late Col. Bzigu Lassa Afakirya was became their Military Administrator. According to him, he was back home to ask for the blessings and support of all the members and executives of the NBA Branches. He promised to serve passionate without fear or favour and give equal access to opportunity, participation and continue the good works of Mr. Olumide Akpata.

Closing remarks were given by Mr. Sanusi Liman and closing prayers by Mr. Hassan Sheriff.