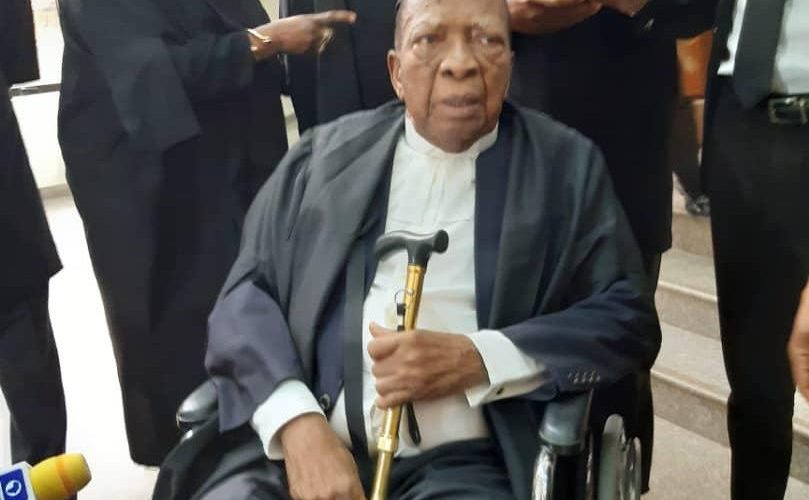 CITY LAWYER gathered yesterday that the Body of Benchers is currently seeking inputs into the bill from critical stakeholders in the legal profession. It has also set up a committee saddled with hammering out a final draft of the bill.

There are strong indications that the position of BOSAN at today’s virtual meeting which kicks off at 11 a. m. is crucial to the fate of the Draft Bill going forward. The body last met almost a year ago in November 2019.

CITY LAWYER also gathered from impeccable sources that the immediate past Nigerian Bar Association (NBA) President, Mr. Paul Usoro SAN had submitted a written position of the Bar to the Body of Benchers, a position said to be substantially different from those of his predecessor, Mr. Abubakar Mahmoud SAN.

It is recalled that Mahmoud had, in an elaborate effort to rejig regulation of the legal profession, set up in January 2017 the 23-member Chief Anthony Idigbe SAN led “Legal Profession Regulation Review Committee.” Among the committee’s terms of reference was “In particular, to review the role of the Body of Benchers, the General Council of the Bar, the Council for Legal Education, the Supreme Court of Nigeria and the Nigerian Bar Association in the regulation of the legal profession and determine if the roles being played by these institutions and organs are appropriate to meet the needs of a robust and modern and independent legal profession in Nigeria.” Its report led to the stillborn “Legal Practitioners Regulation Bill” which virtually derobed the Body of Benchers of its regulatory role and vested it in the “Legal Practitioners Regulation Council.”

Though the Bill had a stormy passage at the Body of Senior Advocates level, with many members querying some of its “revolutionary” provisions, the draft bill was quickly buried by the Body of Benchers which instead sought an amendment of the extant LPA.

Some Bar Leaders have queried why “politicians” should be conferred with automatic membership of the elite Body of Benchers, saying it is designed “to buy them to pass the Bill.” But others argue that it is more tolerable than the defunct Legal Profession Regulation (LPR) Bill which had proposed laymen as members of its apex council. Apart from judges, the stillborn LPR Council was to include a young lawyer, women’s representatives from FIDA, and three lay persons appointed by an Appointment Panel from the Institute of Directors (IOD), and the Nigerian Medical Association (NMA) among others. Some Bar Leaders argue that inclusion of the NASS members may facilitate interface with its leadership and passage of bills relating to the profession, especially the judiciary’s budget.

Section 1(3) (q) of the draft bill also whittles down the influence of the NBA in the Body of Benchers by reducing members to be appointed from its ranks from 30 in the extant LPA to 20 members, “five (5) of whom may be Law Teachers.”

Unlike the LPR Bill which sought to repeal the Council of Legal Education Act, the current bill focuses entirely on amending the Legal Practitioners Act which came into effect on 16th May, 1975.

Speaking on the draft bill, former NBA presidential candidate, Prof. Ernest Ojukwu SAN said: “The inclusion of politicians as BOB is not the most dangerous thing in the Bill, if you ask me. Look at the functions being taken over by the BOB. That may not be as challenging as the Real actors – The entire Judiciary and AGs running the profession. This is the most dangerous aspect – when Government runs what is supposed to be an independent profession. Should the Judiciary and AGs be the main Regulator of an ‘independent’ legal profession?”

Referring to the work of the Idigbe Committee of which he was a member, Ojukwu said: “NBA is surely one of the regulators now. There are many regulators under the present law(s). That is why we harmonised the regulations and regulators into the Legal Profession Regulation Council Act. But the proposal by BOB wants the BOB to be the Regulator.”

Also worried by the inclusion of the political office holders, fiery Bar Leader and longstanding NBA Chief Prosecutor, Mr. Jibrin Okutepa SAN said: “If the BOB is the highest decision making organ of the legal profession then more seasoned members of the legal profession in private practice must be allowed to be members. The number of official members is outrageously not healthy for the role the body is to play.”

Lampooning the draft bill, a Bar Leader, Mr. Ademola Adewale said: “I submit that persons holding non-legal offices particularly where the offices are political should not be awarded core legal awards or titles like BOB, SAN etc. These posts/awards should be reserved for practitioners who have stayed the course by staying in legal or quasi legal offices or pursuits; not to reward lawyers turned politicians.

“Imagine lawyers who have kept the faith as it were still struggling to make Benchers, SAN 30-35 after legal practice while some lawyers who are engaged in politics get to be Speaker in 10/15 post call (and) get rewarded for political success by being given these awards on a platter gold . Apart from being unfair to the hard core practitioners, it is a great disincentive to those who have made the decision to be committed to legal practice or core legal pursuits.”

On his part, Idigbe had said of the stillborn LPR Bill: “The HAGF, Body of Benchers, Bar Council, Legal Practitioners Disciplinary Committee, The Supreme Court, The Chief Justice of Nigeria, Legal Practitioners Privileges Committee, Council of Legal Education, Nigeria Law School and Nigerian Bar Association have no central organisation and are not subject to any central control.

“There are no licensing and supervision of practitioners and law firms. No practice licence, no inspection, no insurance, no mandatory continuing professional development, no annual report, and the current NBA CPD programme has no statutory backing. The bill seeks to introduce the system of pupilage to enhance the development of legal ethics and professionalism in young lawyers, as well as seeks to make provision for licensing.”

CITY LAWYER gathered that following today’s eagerly awaited BOSAN Resolution, the committee saddled by the Body of Benchers with developing a clean copy of the bill will collate all inputs from the stakeholders and finetune the bill for presentation to the National Assembly for passage into law.

It was unclear at press time whether the Body of Benchers will request another input from current NBA President, Mr. Olumide Akpata who is now a statutory member of the body by virtue of Section 3(1)(i) of the Legal Practitioners Act.