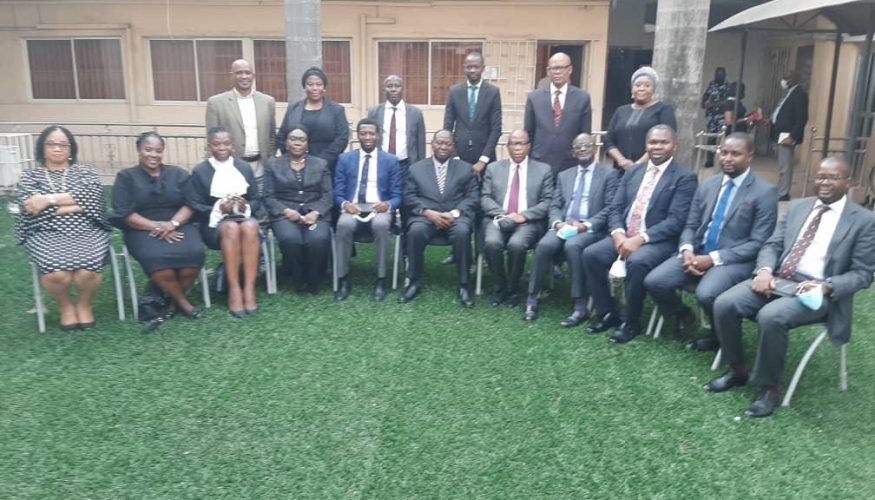 In fact, Justice Alogba reportedly joked about the alleged frosty relations between him and the branch when he observed that the temperature at the meeting was very cool, with the air-conditioning in full blast.

Justice Alogba, who led a high-powered team to the meeting, regretted that he had been unable to receive the branch leadership due to his pressing official engagements but assured that the interface would become more regular henceforth.

Below is a report of the meeting as posted by the Branch Secretary, Mr. Moshood Abiola.

The NBA Lagos Branch today met with the leadership of the the Lagos State Judiciary.

The delegation from the branch led by the branch Chairman, Yemi Akangbe along with members of the Exco and the Judiciary Relations Committee met with Chief Judge of Lagos State-Hon. Justice K. O. Alogba and the top echelon of the state judiciary at the Chief Judge’s conference room at the Ikeja High Court.

The Chief Judge opened the meeting with a jocular reference to the “alleged frosty relationship between the bar and the bench” when he observed that the temperature at the meeting was very cool with the air conditioning in full blast.

The CJ expressed his regrets that the meeting had not held earlier as had been expected. He stated that this was due to a plethora of official and circumstancial reasons. He said he was personally pained that it took this long for the meeting to hold and apologized for it. He promised that it would become a regular meeting.

By way of report, the CJ gave an update on the work done so far to ensure that the dispensation of justice resumes fully. He said the renovation work in the building at Osborne would soon be completed and it would house at least eight court rooms of the high court. He added that there were now two new court rooms at the eti Osa court house to take two more magistrates, one more court room at the Magistrate Court in Sabo Yaba.

The Honorable Chief Judge also said there will be four court rooms at the High Court level at the old juvenile court building in Sabi. He said all these courtrooms are expected to be ready for use by the end of March 2021.

In his remarks, the branch chairman thanked the Chief Judge for the warm reception. He stated clearly that there was no frosty relationship between the bar and the bench and the Lagos bar was happy to work with the judiciary. He again commiserated with the Lagos Judiciary on the destruction of several courthouse. He said the branch was pained by the devastating loss and was open to working with the judiciary. He reported that in the aftermath of the destruction the NBA held an emergency meeting and several measures and protocols were agreed on the way forward.

The Vice Chair of the Judiciary Relations Committee, Dr. Wale Olawoyin SAN in his submissions urged the Chief Judge to set up a committee with members from the bar and bench to serve as an avenue of feed back of issues as they arise. He highlighted some of the problems been faced by members in accessing the courts which included problems associated with filing and assignment of cases, scheduling of hearings and many more.

In his response the Hon. Chief Justice promised to look into the creation of the committee in a week’s time. He reiterated the work been done on E-Filing but said the problem was majorly from lawyers who sometimes cannot upload their documents and this causes a lot of delay. On late assignment of cases, he said he was actively looking into it and recently had to sanction some staff who were found wanting. He said he was also looking at many other measures to ease the system. He said he was happy these issues were being raised and he promised it would be looked into.

On scheduling of hearings, he said whilst there are guidelines laid down to be followed members of the bar were also not adhering to the guidelines as some would want to even be in court when their cases were not ready for hearing. He urged for patience and cooperation from the bar. He reiterated his directive that registrars must give 48 hours notice if the court was not going to sit. He urged that members of the bar should write if any registrar fails to do so.

On the issue of technology, he said it was a matter of finance. He commended the governor of the state for his support and understanding so far. He said even before the pandemic some courts have been sitting virtually. He said although there are still some impediments, the governor has been doing a lot to support the judiciary.

The Chief Judge however observed that even with the best efforts of the Judiciary, the reality of the pandemic is still a barrier to the full operation of the judiciary.

He thanked the Lagos Branch for the visit and hoped for many more of such. He urged cooperation from everyone and stated that all hands must be on deck.

The branch chairman in his final remarks suggested that there should be specific time allotted to cases each day so that lawyers don’t have to wait. The Chief Judge said this was already been done especially in his case, he promised that he would encourage other judges to do same as it is even in the interest of the judges to do so.

Mrs. Boma Alabi SAN gave the vote of thanks on behalf of the Lagos branch.

It is recalled that the former Financial Secretary and Treasurer Emeritus of the branch, Mr. Phillip Njeteneh had while reacting to the CITY LAWYER report on alleged frosty Bar-Bench relations said: “At the last Branch meeting the Exco, learned seniors & members generally expressed their frustration at the cold shoulders given the Branch by the Lagos CJ over the offer to help and overtures of the Premier Branch over the recent destruction of courts & court facilities.” 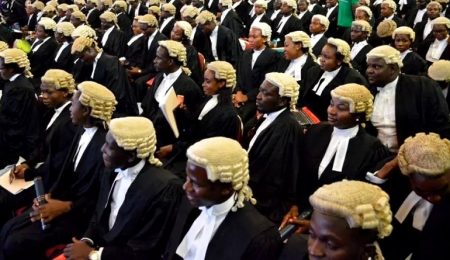