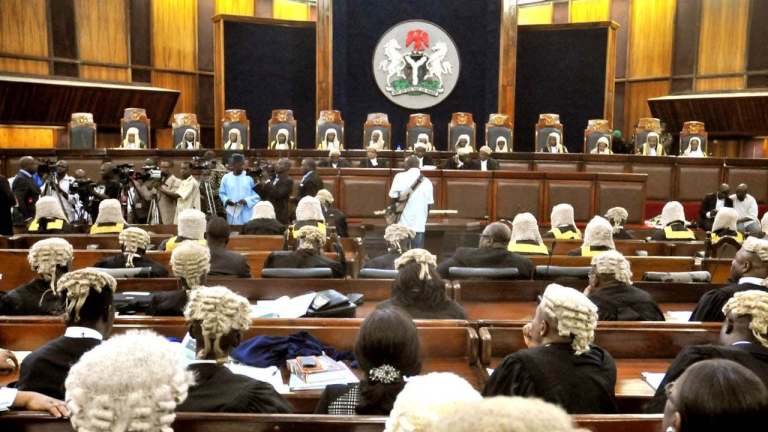 A federal judge and some leading jurists today disagreed on the merit of the lawsuits filed at the Supreme Court by Lagos and Ekiti States challenging the constitutionality of virtual hearing by Nigerian courts.

CITY LAWYER had in an exclusive report revealed plans by South West Attorneys-General (SWAG) to seek a constitutional interpretation of virtual court hearings as set out in the National Judicial Council (NJC) Guidelines and sundry Practice Directions issued by heads of courts.

Speaking at an Attorneys-General Colloquium on “Remote hearing and e-filing in Nigeria: A broader perspective and practical, foolproof implementation,” Ekiti State Attorney-General & Commissioner for Justice, Mr. Olawale Fapohunda had said that the Attorneys-General of Lagos, Ondo and Oyo States would head to the Supreme Court to test the constitutionality of remote hearings. Both Lagos and Ekiti States have now filed matters at the Supreme Court asking the apex court to determine the constitutionality of virtual hearings among other reliefs.

No sooner had the CITY LAWYER report hit the newsstands than some senior lawyers lampoon the move by the attorneys-general.

Also speaking today at the Nigerian Bar Association, Lagos Branch webinar on “An engagement with the National Industrial Court of Nigeria on the Practice Directions and Guidelines for Court Sitting 2020,” Justice Benedict Bakwaph Kanyip, President of the court, expressed serious doubts over the merit of the SWAG cases. However, the two panelists that featured on the webinar had differing views on the matter.

While foremost law teacher and expert in evidence law, Prof. Taiwo Osipitan SAN aligned with Justice Kanyip, arguing that no dispute has arisen between the States and the Federation as to justify the attention of the Supreme Court, leading commercial lawyer, Prof. Konyin Ajayi SAN disagreed, arguing that the SWAG suits have merit.

Said Justice Kanyip: “I have not seen the (court) papers. But what was reported in the press was that they had gone to the Supreme Court to ask the Supreme Court to state whether what they are doing is not legal. It is one thing to say, ‘This thing that is being done has injured me.’ It is another thing to say, ‘I have acted; confirm to me that what I did is legal.’ This second example, from what I have gathered, is what has been sent upstairs. I don’t know how – even if it is Federal High Court, as Prof. (Osipitan) said that interpretation of the Constitution is that of the Federal High Court – even if it is Federal High Court, can you go to Federal High Court and say, ‘This thing I have done, validate it for me, tell me its valid.’ I really don’t know. It is something I have been thinking and thinking.”

He added: “I think Section 36 deals with fair hearing, fair trial. We have to also look at whether the virtual sitting, virtual hearing, remote hearing key into that. I really don’t see any reason why we cannot come to the conclusion that fair hearing and fair trial is not hindered by virtual hearing.”

On his part, Osipitan queried the merit of the SWAG suits, saying: “Looking at the issue of disputes, the Supreme Court of Nigeria is the apex court. It has just one original jurisdiction – to determine disputes between the Federation and the States or inter-State disputes, insofar as those disputes depend on existence of rights.

“In other words, not just disputes but disputes that will call into question the rights and duties of the parties. And I keep on asking myself, going to the Supreme Court to seek interpretation of the Constitution against who? Against the Federal Government. What has the Federal Government or the Executive done to warrant being dragged to the Supreme Court?”

Passing his judgement on the SWAG suits, the respected senior advocate declared: “I see that case as very academic and very hypothetical. Granted that the National Assembly wants to amend the Constitution; that itself creates a dispute between a litigant and the National Assembly with respect to the interpretation of the Constitution. If that is the case, that creates a lis, a dispute. But the place to go to is the Federal High Court for issues that have to do with the interpretation and application of the Constitution. The Federal High Court has jurisdiction over such issues.”

Turning to the plan by the National Assembly to amend the Constitution to accommodate virtual hearing, the University of Lagos law teacher said: “I also do not see how the National Assembly could amend the Constitution to insert the aspect of virtual hearing. The Constitution is a very serious document, very very serious. For them to amend it, they will also need the support of the States; in other words, after finishing at the National Assembly, they still must have the support of the State Assemblies. So they have problems with the States that are not going to agree with them. But I do not think that what is happening justifies the amendment of the Constitution; certainly No! We can interpret the Constitution in a purposive and liberal manner, to the extent that wherever you have the word ‘hearing in public,’ it does not mean that members of the public will all be physically there; all they are saying is opportunity to view the proceedings, to follow the proceedings. It is a matter of interpretation; we don’t require any amendment to the Constitution.

“In terms of the dispute they have placed before the Supreme Court, I am afraid they have gone to the wrong court and I can predict that the outcome is likely to be that it is academic, it’s hypothetical and it is outside the original jurisdiction of the Supreme Court.”

But Ajayi disagreed, saying: “The Constitution must be read in a manner that ensures that there is justice. The Supreme Court has said in a number of cases – including Global Excellence v Duke – that the language of the Constitution, although it doesn’t change, the changing circumstances of the society for which it is designed must yield to new and fuller need. In other words, you change your statutes, you don’t change your Constitution. The point has been made as to what is ‘public’ and what is the purpose of that. You cannot amend the Constitution whenever anything changes
“The question is, is this suit by Lagos State academic? Is it a dispute? Two things arise: One is, can the Supreme Court take an academic matter? It has said over and over again that it does not take academic matters. But then, the jurisprudence of this point is that there is a difference between a hypothetical matter and an academic issue.

“A hypothetical question is taken by a court when it is of public importance. And there are a number of English House of Lords, Supreme Court decisions on that point, that say, they will take a hypothetical question that is of public importance. Let us take this matter for instance; is it a matter of public interest? Yes, it is because it is notionally possible that we would be unable to go to court for two years. So, should there be a determination on the point? I think there should be, because we would have a definite Yes or No on whether all these rules are bad or these rules are good. At the moment, if I go to court A, they may say ‘No;’ I go to court B, they say ‘Yes.’ Or I go to Court of Appeal A, they say ‘Yes,’ but Court of Appeal B says ‘No.’

“The Constitution says the Supreme Court can take a dispute. People have said there is no dispute. So, the jurisprudential question is, ‘What is a dispute?’ Is a dispute a war or is a dispute a difference? And I think there is a difference. Now as to what is allowable, there are judges and there are lawyers and legislatures that have said Section 36 of the Constitution requires a physical building in terms of public. There are people that have said, ‘No, public is the ability of more than the litigant to attend the hearing.’ So, there is that point as to what is the meaning of public.

“The other thing is, in determining what a dispute is, we have to go beyond the narrow confines of ordinary matters that are not of public interest, that are not disputes between economic units of the State. When it comes to the administration of justice, dispute is totally different; it is about the administration of justice, it is also about the ability of the Governor of Lagos to ensure that his executive policies in running the state come to fruition. The Governor of Lagos State is entitled to ensure that the law in Lagos State is one that assures local and domestic investors that in this state there is justice; that in this state, the courts work functionally. He has an interest. These are the public interest issues.”

Fapohunda had while unveiling plans by the South West Attorneys-General to litigate the controversy, said: “Since the National Judicial Council issued its Guidelines for court sittings in this COVID-19 period, we have had a national conversation particularly among justice sector stakeholders on the constitutionality or otherwise of remote court hearings.”

Since the issuance of the NJC Guidelines and several Practice Directions on virtual court hearings, some jurists have argued that virtual hearings violate the 1999 Constitution on the requirement that court hearings must be held in public.

Section 36(3) and (4) of the 1999 Constitution provides as follows:
“(3) The proceedings of a court or the proceedings of any tribunal relating to the matters mentioned in subsection (1) of this section (including the announcement of the decisions of the court or tribunal) shall be held in public.
(4) Whenever any person is charged with a criminal offence, he shall, unless the charge is withdrawn, be entitled to a fair hearing in public within a reasonable time by a court or tribunal:
Provided that –
(a) a court or such a tribunal may exclude from its proceedings persons other than the parties thereto or their legal practitioners in the interest of defence, public safety, public order, public morality, the welfare of persons who have not attained the age of eighteen years, the protection of the private lives of the parties or to such extent as it may consider necessary by reason of special circumstances in which publicity would be contrary to the interests of justice;
(b) if in any proceedings before a court or such a tribunal, a Minister of the Government of the Federation or a commissioner of the government of a State satisfies the court or tribunal that it would not be in the public interest for any matter to be publicly disclosed, the court or tribunal shall make arrangements for evidence relating to that matter to be heard in private and shall take such other action as may be necessary or expedient to prevent the disclosure of the matter.” 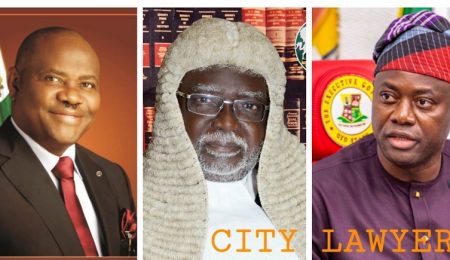 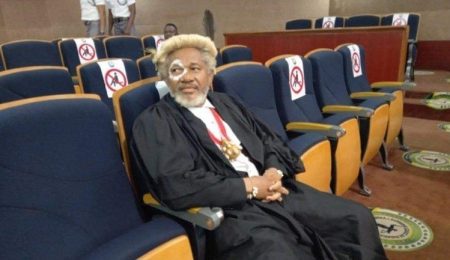 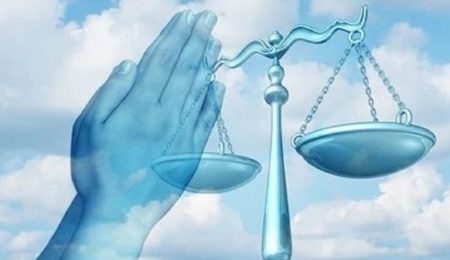