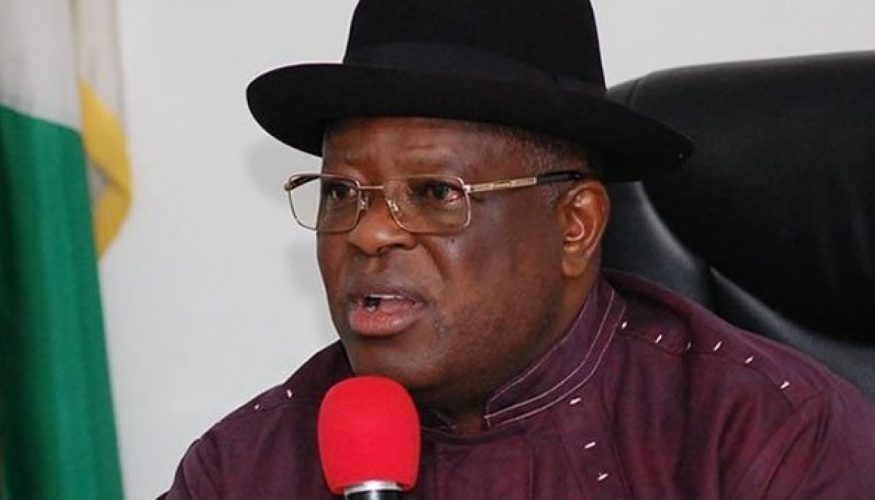 MR. JOHN COLLINS NWOBODO, an Enugu based lawyer, argues in this piece that while the Federal High Court by section 272 (3) of the Constitution of Nigeria (as amended) has jurisdiction to hear and determine the question as to whether the term of office of a Governor or Deputy Governor has ceased or become vacant, that jurisdiction is not at large but only relates to the recognized grounds for their removal

The reason for the court’s decision is premised on the court’s understanding that votes garnered during elections belong to the Political Party that sponsored the candidate citing section 221 of the Constitution of the Federal Republic of Nigeria 1999 (as amended). In the court’s view, since the Governor and his Deputy had defected from the Political Party through which they came into office, they cannot lawfully transfer the votes obtained under the platform of the PDP to the APC, their new political abode. The said provision of section 221 of the Constitution cannot by any stretch of imagination be interpreted to mean that votes scored in an election belong to Political Parties. The section merely states that only Political Parties can canvass for votes for any candidate in an election. To canvass simply means to ask for or seek support. The language of the Constitution is so clear and unmistaken that the role of the Political Party is to ask for votes on behalf of its candidate. A benefit obtained on behalf of someone indeed belongs to the person on whose behalf it is solicited and not otherwise.

The above formulated question will be answered by an exploration of the law on how, when and circumstances under which an elected executive political office holder- President, Vice President, Governor, Deputy Governor can be removed or may cease to hold office.

From the above provision, defection is not one of the grounds for the Governor or his Deputy to vacate office. This issue came up for determination in the Supreme Court in the case of Attorney General of the Federation & 2 Ors. v Atiku Abubakar & 3 Ors (2007) 10 NWLR (Pt 1041) 1 wherein the Supreme Court categorically stated: “The power to remove the President and Vice President is provided for in section 143 of the Constitution. The provision clearly gives the role of removing the two public officers to the National Assembly….The Constitution has not conferred on the court the power to declare the office of the holder of the two offices vacant for whatever reason. Section 146 of the Constitution relied on does not confer such power on the Court….What section 146(3)(c) provides for is that where the office of the Vice President becomes vacant ‘for any reason’, the President shall nominate a new person, with the approval of each House of the National Assembly to fill the vacancy. The subsection does not confer any role on the Court in the process.” Section 191 (3) is the equivalent provision to section 146 in relation to the office of the Governor and Deputy Governor and the interpretation given to section 146(3)(c) applies mutatis mutanda to section 191(3).

Defection not a ground for a Governor or Deputy Governor to vacate office
Under the Constitution, defection as a ground to lose an elective political office applies only to members of legislative houses- Senate, House of Representatives and House of Assembly of a State. See section 68(1)(g) of the Constitution in the case of a member of the National Assembly and section 109(1)(g) in the case of member of the House of Assembly. In Abegunde v Ondo State House of Assembly & Ors (2015 8 NWLR (Pt 1461) 314 at 320 ratio 1, the Supreme Court held under section 68(1) of the 1999, where a person whose election to the legislative house was sponsored by a political party, becomes a member of another political party before the expiration of the period for which that house was elected, he would have to lose his seat in that house. But under the proviso to the said section, if his membership of the new political party occurred because there was division in the political party which sponsored him and as a result he joined the new political party he does not lose his seat.

From the foregoing, it is clear that the Constitution did not intend that an elected executive political office holder will lose his position on the ground of defection. The Supreme Court in Jev v Iyortom (2015) 15 NWLR (Pt 1483) 484 at 497 ratio 8 stated that the express and unambiguous mention of one thing in a statutory provision automatically excludes any other which otherwise would have applied by implication with regard to the same subject matter. Had the framers of the Constitution intended that defection shall be a ground for vacation of office by elected executive political holders they would have provided so in clear terms.

The legal proposition that votes belong to Political Party no longer the law
Again, let us re-examine the reason, on which the Court’s decision was based, that is, that votes garnered during election belong to political parties and not the candidate. This is in fact no longer the law. The often quoted case of Amaechi v INEC (2008) 5 NWLR (Pt 1080) in support of the proposition that votes belong to the political parties no longer stands. In Ozomgbachi v Amadi (2018) 17 NWLR (Pt 1647 171 at 174 ratio 6, the Supreme Court emphatically held that it is individuals, as candidates, who contest and win elections. Also, in CPC v Ombugadu (2013) 18 NWLR (Pt 1385) 66 at 78, 79 ratio 6, the Supreme Court held: “…While a candidate at an election must be sponsored by a Political Party, the candidate who stands to win or lose the election is the candidate and not the political party that sponsored him. In other words, political parties do not contest, win or lose election directly; they do so by the candidates they sponsored…”

Two other instances in addition to the ones earlier mentioned which may give rise to the removal of an elected executive political office holder are:

(1) Through a pre-election case instituted within 14 days of the occurrence of the event. See section 285 (9) of the Constitution of the Federal Republic of Nigeria 1999 (as amended). However, the question may be asked did the suit which culminated in the orders made by the court a pre-election matter as defined by section 285 (14) of the Constitution (as amended). It is obviously not.

(2) Through an election petition complaining of an undue election or undue return. This is also not the case here.

Granted that the Federal High Court by section 272 (3) of the Constitution of Nigeria (as amended) has jurisdiction to hear and determine the question as to whether the term of office of…a Governor or Deputy Governor has ceased or become vacant, that jurisdiction is only in relation to the recognized grounds as already highlighted and does not extend to defection.

Impropriety of the Order Made
Another major flaw in the decision of the Court relates to the nature of order(s) granted. Assuming that defection is a ground to vacate office which is not though, the court lacked the jurisdiction to order the Peoples Democratic Party to submit a name of its candidate to INEC. In the circumstance where the offices of the Governor and Deputy Governor are vacant at the same time, the Speaker of the House of Assembly is the appropriate person to hold the office pending the conduct of fresh election. See section 191(2) of the Constitution (as amended).

Copyright 2020 CITY LAWYER. Please send emails to citylawyermag@gmail.com. Join us on Facebook at https://web.facebook.com/City-Lawyer-Magazine-434937936684320 and on TWITTER at https://twitter.com/CityLawyerMag. All materials available on this Website are protected by copyright, trade mark and other proprietary and intellectual property laws. You may not use any of our intellectual property rights without our express written consent or attribution to www.citylawyermag.com. However, you are permitted to print or save to your individual PC, tablet or storage extracts from this Website for your own personal non-commercial use. The views expressed in this article are entirely those of the author and do not necessarily reflect