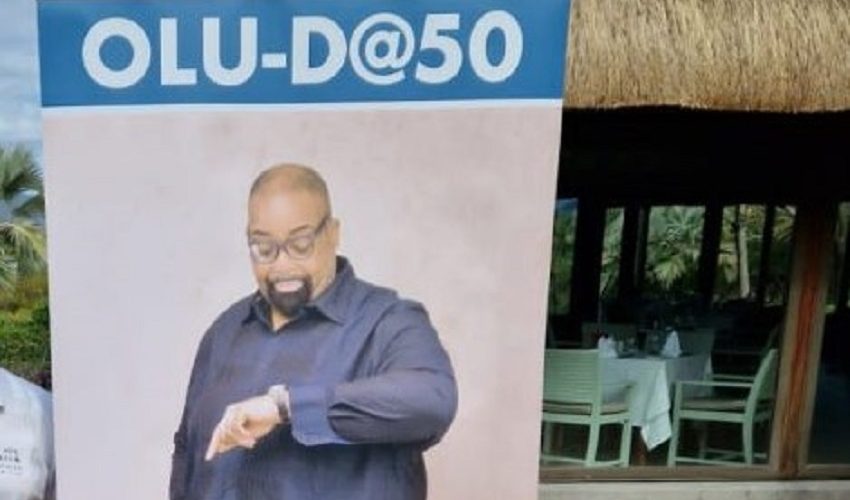 The immediate past Nigerian Bar Association (NBA) President, Mr. Olumide Akpata is 50 years today. This is coming exactly five days after the senior corporate lawyer wed his heartthrob, Osayamon Michelle May Ogbebor at a lavish and exclusive nuptial on the beautiful island of Belle Mare in Mauritius.

The wedding was held at the Trou D’Eau Douce Catholic Church while the A-List guests were feted at the luxurious Longbeach Resort.

Akpata was born on 7 October, 1972. He had his early education in Warri, Delta State and thereafter attended King’s College, Lagos from where he proceeded to study Law at the University of Benin (UNIBEN). He graduated from UNIBEN in 1992, and was admitted to the Nigerian Bar on 15 December, 1993.

After his National Youth Service Corps (NYSC) in Kano State, he joined the law firm of Dr. Mudiaga Odje & Co. in Warri, Delta State where cut his teeth in legal practice under the tutelage of the late sage, Dr. Mudiaga Odje, SAN, OFR, who he describes as “the most seasoned litigator of his time.”

In 1996, he relocated to Lagos and teamed up with his cousin, Oghogho Akpata, who had in 1995 set up the law firm, TEMPLARS, after honing his skills in the firm of F. O. Akinrele & Co. under the leadership of the legendary Chief Frank Odunayo Akinrele, SAN.

In his words, “From 1996 to date (2020), I have worked with Oghogho, and our colleagues at Templars, in building and sustaining a world class, multi-sectoral and full-service law firm which is now in the 25th year of its existence and consists of over 100 fee-earners, including two Senior Advocates of Nigeria.”

As a measure of his expansive scope, he notes that “in my over two decades at Templars, I have practised across the diverse areas in which we operate, and I have been privileged to lead or participate in some of the major groundbreaking transactions that have shaped commercial law practice in Nigeria and indeed the Nigerian economy.”

Reputed as a consummate Bar-man, Akpata began participating in NBA activities as a member of the NBA Warri Branch upon joining the law firm of Dr. Mudiaga Odje & Co. Upon relocating to Lagos in 1996, he joined NBA Lagos Branch.

He was a foundation member of the NBA Section on Business Law, and worked closely with the pioneer Chairman of the Section, Mr. George Etomi, and his team to operationalise the Section after its inauguration in December 2004 by then NBA President, Chief Bayo Ojo, SAN.

His words: “I was also a member of the Planning Committee which organised the very first NBA-SBL Conference that was held in Abuja in March 2006 and which proved to be a transformational conference that set the NBA-SBL on its current trajectory.

Akpata sits in non-executive capacity on the Boards of a number of private companies, some of which he chairs. He is a member of several think-tanks, including the Nigeria Economic Summit Group (NESG) and the United Nations Nigerian Humanitarian Fund (UN-NHF), of which he was a pioneer member.

Increasingly popular for his trademark dance steps, Akpata describes himself as “a gregarious person and when I am not advising on a transaction or attending a client meeting, I love to be in the company of my friends and family or attending social events. I also love travelling and reading the biographies of distinguished personalities. I am a devout Christian and a member of the Redeemed Christian Church of God.”

His tenure as NBA President was reckoned as one of the most proactive in tackling human rights and rule of law issues that confronted the Nigerian Bar as well as in pushing the frontiers of welfarism at the Bar.