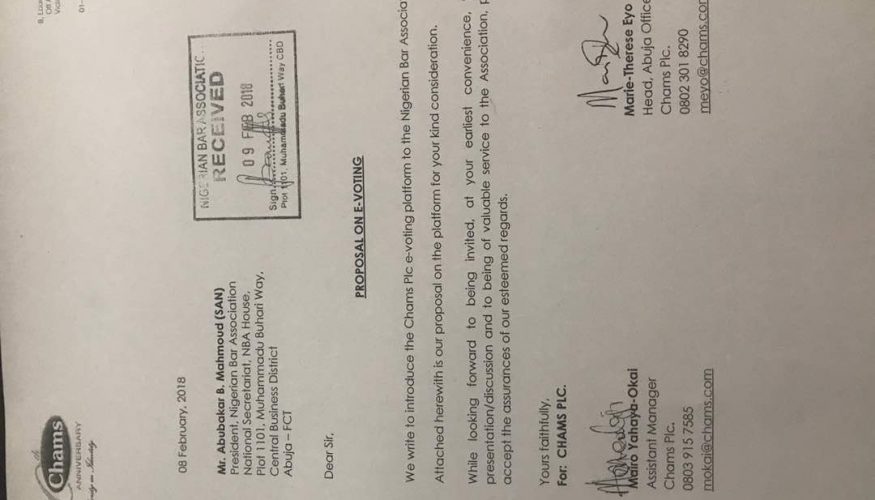 The scandal rocking the forthcoming Nigerian Bar Association (NBA) National Officers Election has taken another dimension as facts have emerged that CHAMS Plc submitted its bid to provide electronic voting services for the elections at least 31 days before the inauguration of the Electoral Committee of the NBA (ECNBA).

This has raised more doubts as to the due diligence and transparency that attended the bidding process. It is recalled that an exclusive report by CITY LAWYER https://citylawyermag.com/2018/07/12/nba-hires-usoros-co-directors-firm-as-ict-partner-for-elections/ showed conclusively that Mr. Paul Usoro SAN, a major candidate in the elections, is a co-director at Access Bank Plc with Dr. (Mrs.) Ajoritsedere Josephine Awosika, the first female Chairman of CHAMS Plc.

The ECNBA was approved by the NBA National Executive Committee (NBA-NEC) meeting which held in Ilorin, Kwara State between February 28 and March 2nd, 2018.

But in a letter to NBA made available to CITY LAWYER and dated February 8, 2018, exactly 20 days before the commencement of the NEC meeting at which electoral committee was approved, CHAMS Plc, the controversial ICT Partner selected by the ECNBA to provide highly sensitive ICT support for the elections, stated:

“We write to introduce the CHAMS Plc e-voting platform to the Nigerian Bar Association.”

Titled “Proposal on e-voting,” the letter further stated: “Attached herewith is our proposal on the platform for your kind consideration.

“While looking forward to being invited, at your earliest convenience, for a presentation/discussion, please accept the assurances of our esteemed regards.”

The letter which was addressed to NBA President, Mr. Abubakar Mahmoud SAN, was signed by two of CHAMS’s officers and received by NBA on 9th February, 2018.

The latest revelation has raised questions on whether the selection of CHAMS was premeditated, with some stakeholders citing “insider abuse.” Former National Human Rights Commission (NHRC) Chairman, Prof. Chidi Odinkalu had berated the ECNBA for its handling of the bidding process, saying: “It seems clear ECNBA has not done its homework and is not looking very independent. The degree of transparency expected of this ECNBA has been lacking.”

The NBA Election is scheduled to hold on July 27 and 28, 2018. Mahmoud has summoned a crisis management meeting for Thursday to find ways to resolve the debacle and save the election. Analysts are worried that NBA may not survive another electoral crisis. A lawsuit over the 2016 NBA Elections is still pending in court.