The Nigerian Bar Association (NBA) 2020 National Elections will hold barely 28 days from today. In fact, Paragraph 2.3 (d) of the Second Schedule to the NBA Constitution 2015 (as amended) provides that “The full list of all legal practitioners qualified to vote shall be published by ECNBA in conjunction with the National Secretariat of the NBA at least twenty eight (28) days before the date of the election.” The poll is scheduled to hold on July 24 and 25, 2020 via electronic voting.

The elections promise to be keenly contested, given the ongoing bruising campaigns and frenzied interest shown by the aspirants, their supporters and other stakeholders.

The fiery campaigns are not entirely unexpected, due largely to the vantage position of NBA and the peculiar role of the Bar in shaping the fortunes of its members and the nation. Stakeholders still recall with nostalgia the uncommon role of the Bar in the heyday of military dictatorship, and long for a return to those glory days when the Bar not only spoke with one voice, but was viewed by many as a force for good and the voice of the voiceless.

They long for a Bar that is not only widely respected but prides itself as a sentinel for the rule of law and civil liberties and a bulwark against tyranny; a Bar that is a pride for its members and an envy of other professional associations. Increasingly, members long for a Bar that places premium on their welfare and lawyers’ employment, that is fair in regulating law practice and firm in fostering the administration of justice.

The nexus between these aspirations and a Bar leadership birthed via credible and rancour-free elections is not far-fetched. It is safe to say that especially since the advent of electronic voting, Bar regimes have been hobbled by controversial NBA Elections. While one regime was in and out of court almost for the entirety of its tenure attempting to validate its mandate, another had the singular and unprecedented misfortune of repudiating allegations of election rigging before Economic and Financial Crimes Commission (EFCC) investigators!

These scenarios question the integrity of NBA’s internal dispute resolution mechanism. Although Section 16 of the NBA Constitution provides that “No aggrieved member shall resort to the court unless his/her complaint must have been considered and disposed of by the Dispute Resolution Committee; provided that such complaint of member shall be decided by the Committee within sixty (60) days of receipt of the complaint,” this has been observed more in breach. This may not be unconnected with the seeming lack of faith in the committee, moreso as it is often seen as a rubber stamp of the outgoing President. What is more, the NBA Trustees were profoundly reticent, having spent 14 years on the saddle. The committee has now been reconstituted by the current regime, and is led by former NBA president, Dr. Olisa Agbakoba. Other members of the committee are former NBA presidents, Mr. Joseph Daudu (SAN), Mr. Augustine Alegeh (SAN), former NBA General Secretary, Mr. Obafemi Adewale and Hajia Fatima Kwaku.

It is instructive that in the run-up to the 2020 NBA Elections, perhaps no activity is so central to achieving the objective of credible and transparent elections than the publication of an unblemished voters’ register. A reliable voters’ register is the pivot upon which a rancour-free election is built. On the other hand, a jaundiced voters’ register is a recipe for flawed polls and discord.

Sadly, the processes leading up to the compilation of the voters’ register for the forthcoming polls have been less than flawless. The hiccups started with many branch chairmen thumping down a memorandum by the NBA General Secretary, Mr. Jonathan Taidi requesting them to provide the list of members who have paid their Bar Practice Fees and Branch Dues as at 31st March, 2020 to the national secretariat in compliance with the NBA Constitution (as amended). The response of most branch leaderships was so dismal that the Electoral Committee of the NBA (ECNBA) described the situation as “disheartening.” It took the direct intervention of the electoral committee for more branches to key into the process.

Ever since, it has been a continuing tale of woes by the ECNBA regarding the exercise. Aside from the fact that many branches simply ignored the deadlines set by the electoral committee or the format for sending their list of members, the ECNBA noted that “Most of the Branches inexplicably, are reluctant to release to the ECNBA their Bank Statements or tellers or to provide such other credible documentary evidence in proof of Branch dues payments by its eligible members. They would rather that the ECNBA take the words of the Branch Executives and the lists produced by those Executives some of which merely stated dates of such purported payments without more.” This is not only curious, but raises fundamental questions about the quality of governance in some NBA branches.

Perhaps more grievous is the fact that many eligible branch members may be disenfranchised in the forthcoming elections due to no fault of theirs but purely as a result of negligence on the part of their branch leaderships. For example, the electoral committee observed that some branches “either did not submit their lists in the prescribed form or failed to send evidence of payment as directed,” adding that “only names of their members verified using the stamp and seal lists will be utilized for the elections.” The branches include Ungogo, Mubi, Jalingo, Iwo, Mbano-Etiti, Ogwashi-Ukwu, Owerri, Bukuru, Afikpo, Epe and Ikirun. This is worrisome and unacceptable.

On the other hand, CITY LAWYER investigation shows that the latest voters’ register as published by the ECNBA is replete with duplicated names. Although the ECNBA Chairman, Mr. Tawo Eja Tawo SAN told CITY LAWYER in response that “We (electoral committee) are working on all issues pertaining to the voters register,” there is no gainsaying that a complete clean-up of the register is an over-arching priority.

As the ECNBA fine-tunes the list of candidates for the elections, it is expected that the committee will engage the candidates and stakeholders to reassure everyone on the transparency of the entire electoral process.

Another major hurdle for the ECNBA is the choice of information technology partner and platform for the elections. The electoral committee acknowledged the critical role of the information technology platform in the electoral process when it said that “There is no gainsaying that the success of the elections would depend to a large extent on the electronic or IT platform that would be deployed for the election,” adding that “The need to procure such a platform has been a priority.” While the electoral committee has sensationally avowed its own neutrality, assuring that it “is totally independent,” the integrity of the IT Partner and e-voting platform must, like Caesar’s wife, be above suspicion.

Conducting a free, fair and transparent poll may yet be the most enduring legacy of the Mr. Paul Usoro SAN-led Administration. The ECNBA has repeatedly committed to this pressing goal, assuring that not only will no eligible voter be disenfranchised, it “would conduct a free, fair, transparent and credible NBA 2020 National Elections that would be a standard, not only for the NBA but for the Nigerian polity.” It is now left for the Mr. Tawo Tawo SAN-led electoral committee to walk the talk, even as all hands must be on deck to put the spectre of contentious Bar polls firmly behind us. 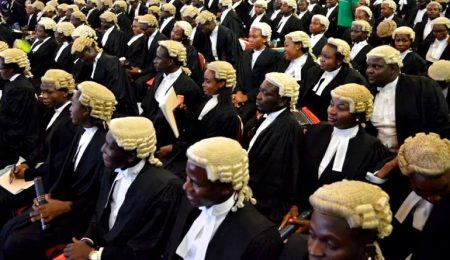 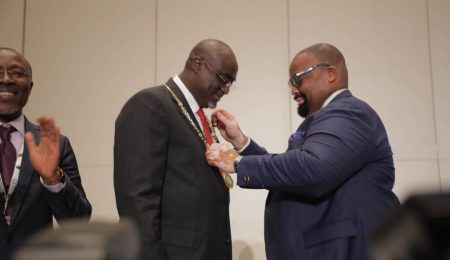