A new president of the Nigerian Bar Association (NBA) will emerge on August 4, 2018 following the release of new election time table by the Electoral Committee of the NBA (ECNBA).

The decision has implicated a constitutional shift in NBA’s election calendar, as the 2015 NBA Constitution provides for the conduct of national officers election in the month of July.

Article 2.3 (a) of the Second Schedule to the NBA Constitution provides that “Election of National Officers shall be held in the month of July of the election year of the Association or at such time and place as may be ratified by National Executive Committee.”

The decision on the new time table was reached following marathon meetings between ECNBA, the NBA leadership led by Mr. Abubakar Mahmoud SAN, ECNBA’s ICT partners as well as the candidates and their ICT experts.

According to the new time table released early this morning but dated 29th July, 2018, the election process will commence tomorrow with the troubled verification exercise.

The statement which was personally signed by ECNBA Chairman, Prof. Auwalu Yadudu SAN and its Secretary, Mr. Bolaji Agoro, noted that “The verification portal will be deployed latest by 8:00 pm on Tuesday 31st July.”

More importantly, the equally long-awaited accreditation and voting “will commence by 10:00 pm on Thursday 2nd August and end Saturday 10:00 am 4th August 2018.”

The ECNBA also noted that there are worries among the candidates and their technical experts, saying: “Whilst all are generally satisfied with the readiness except a few challenges relating primarily to the SMS aspect of the delivery of verification notification, which is being addressed, the ECNBA and stakeholders agree that additional time be given for the challenges to be fully and satisfactorily resolved and the portal further tested.”

On the constitutional challenge thrown up by the new time table, an impeccable source close to “NBA House” told CITY LAWYER that “The National Officers are mandated to decisions which are to be ratified by the NEC.” There are strong indications that the NBA leadership will present the decisions to the National Executive Committee meeting preceding the Annual General Conference (AGC) for ratification.

The full text of the ECNBA text reads:

The Electoral Committee of the Nigerian Bar Association (ECNBA) has successfully completed the cleaning up exercise of the voters list by Messrs Crenet TechLab. The Committee has conducted the efficacy testing of the e-voting/IT infrastructure to be deployed for the voting exercise. We have also conducted a mock election and tested the election portal.

The service provider responsible for carrying out the verification exercise, which will enable the cleaned data to be deployed online and for our members to verify their details and correct any errors, has fully briefed the ECNBA, the technical representatives of candidates and other stakeholders. Whilst all are generally satisfied with the readiness except a few challenges relating primarily to the SMS aspect of the delivery of verification notification, which is being addressed, the ECNBA and stakeholders agree that additional time be given for the challenges to be fully and satisfactorily resolved and the portal further tested.

In the circumstances, the ECNBA, after consultation with National Officers, Stakeholders and Representatives of Candidates, considered it expedient to issue the following new timelines:

1. The Election process will commence with verification exercise on Tuesday 31st July 2018;
2. The verification portal will be deployed latest by 8:00pm on Tuesday 31st July;
3. A call center to provide assistance to members who may have challenges with the verification exercise and subsequently the voting exercise will be ready and deployed by Tuesday 12.00noon. The details including the telephone numbers will be issued;
4. Verification will end at 10.00am on Thursday 2nd August, 2018;
5. The formal transfer of the verified data to the e-portal service provider will take place on Thursday 2nd August;
6. Accreditation and voting will commence by 10:00 pm on Thursday 2nd August and end Saturday 10:00am 4th August 2018 with results being announced immediately afterwards.

The ECNBA wishes to assure our members and all stakeholders that it is fully committed to conducting free, fair and credible elections and it is working round the clock to ensure that this is achieved. It wishes to thank the candidates and their representatives who have been fully informed and consulted on various stages of the process.
We appeal to our members to continue to be patient as we address these issues and commence the election process on Tuesday 31st July, 2018.

Be assured of our professional regards. 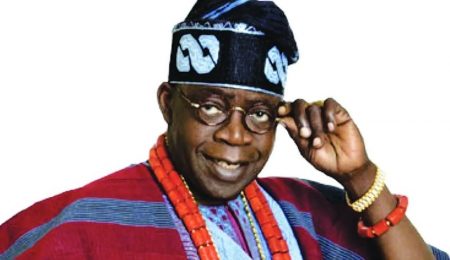 TINUBU CONGRATULATES MAIKYAU ON HIS ELECTION