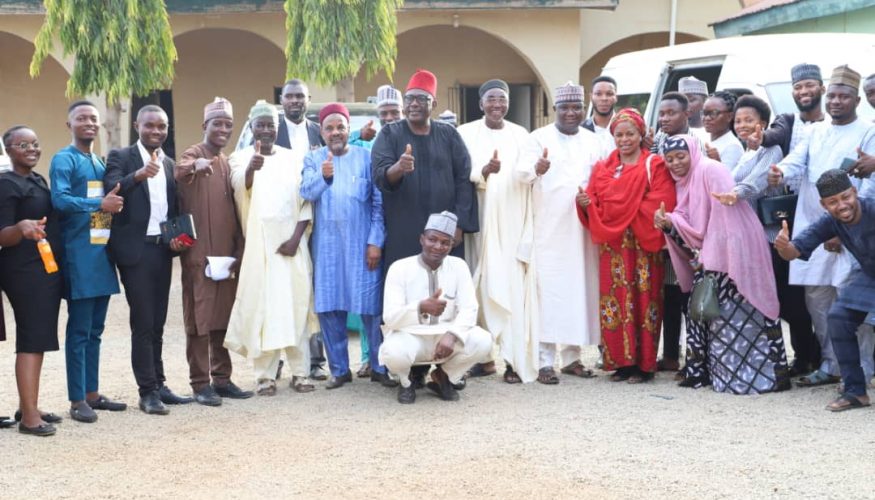 A leading aspirant in the forthcoming Nigerian Bar Association (NBA) Elections and Chairman of the NBA Security Agencies Relations Committee, Chief Joe-Kyari Gadzama SAN has visited NBA Abakaliki, Owerri and Birnin-Kebbi branches to felicitate with them.

Below are the statements on the visits.

The interaction kicked off with opening prayer which was led by the Executives of the Abakiliki Branch. Afterwards, the session was called to order and Arthur Chukwu, Esq. addressed the attendees on the reason for the meeting. Speaking to all who were present, the Former Governor of Eastern Bar Forum, expressed his full and unreserved support and commitment to the aspiration of Chief Joe-Kyari Gadzama, SAN in fostering the development of the Nigerian Bar Association.

The Former Attorney General, Mr. Jossy Eze, also reiterated his support for the vision of Joe-Kyari Gadzama, SAN and his commitment to ensuring its implementation in Abakiliki. The Chairman of the Branch, also assured the attendees that the vision of J-K Gadzama, SAN was an all-inclusive one which every lawyer should key into. He also reiterated his commitment to ensuring that the Abakiliki Bar supports the vision.

In addressing the attendees on behalf of J-K Gadzama, SAN, Chukwuma Ezeala, Esq. thanked all the attendees and asked that they continue to support the vision wholeheartedly. He introduced J-K Gadzama, SAN as a one who was one of them and not just a visitor and urged members of the Abakiliki Branch to be supportive in creating a better NBA.

Chief Joe-Kyari Gadzama, SAN finally addressed the attendees; telling them his personal experiences and how God had saved his life in several occasions. He said, “God has spared my life so that I can continue to serve humanity and in my service to the NBA, my loyalty is to first the Constitution of the NBA, second, the Nigerian Constitution and finally, God Almighty. This is not a speech making event. I know you are committed to the course of the NBA and so, I have come to thank you.

The session closed with closing prayers and an aura of merriment as the members and executives of the Branch were treated to sumptuous delicacies.

The members of NBA Birnin Kebbi Branch (Equity Bar), came out in their numbers to endorse J-K Gadzama, SAN as their candidate for NBA President in the forthcoming NBA election.

They made this endorsement on Friday, May 20, 2022 when J-K Gadzama, SAN and his distinguished entourage paid the branch a visit.

Speaking on behalf of the members of the branch who came out in their numbers for J-K Gadzama, SAN, Abubakar Abdullahi, Esq., The Principal Partner of A. Abdullahi & Co., who mobilized Counsel from the branch, said the Learned Silk is a man of many good things, a man of pedigree and that he has never had any doubt about the ability of the learned senior advocate to lead the Bar.

He stated that none of the three presidential aspirants is a member of the Equity Bar and as such, they will be equitable and fair in their choice more so that the only geographical zone that is yet to produce the NBA President is the North East.

“The Branch will be objective, we will vote with our conscience and without sentiments”. He said.

Abubakar Sadiq Mohammed an elder of the Branch stated that the Branch believes in merit and judging from all areas, J-K Gadzama, SAN has merited to be the NBA President.

Elder Mohammed Audie promised to support the learned silk. He stated that he had decided to stay away from the politics of NBA but that he is making a u-turn because of the the good works that trail J-K Gadzama.

While reacting to comments, Chief J-K Gadzama, SAN stated that he will promote constitutional democracy, rule of law, transparency, accountability and good governance.

He further stated that he will be loyal to the NBA Constitution and the Nigerian Constitution.

It is worthy of note that the Branch came out in their numbers to endorse the Learned Silk.

J-K Gadzama SAN and entourage later that day paid a courtesy call on K.T. Turaki SAN, the Dan Masanin Gwandu and a former Minister for special duties and NLS classmate of J-K Gadzama of the 1986 set who hosted us to a lavish dinner at his palatial home in Birnin Kebbi.

The Learned Silk and Bar Patriot, Chief Joe-Kyari Gadzama, SAN recently had a sit-out session with the Members, Executives and Young Lawyers’ Forum of the NBA Umuahia Branch at Unique Life Hotel Suits.

Mrs. Chioma Ferguson, Esq. gave addressed the attendees after the opening remarks of the Chairman of the Branch. She greeted all the attendees and welcomed them to the gathering. According to her, their attendance and show of hospitality was reflective of a true spirit of compadre which is the disposition all lawyers must have in piloting the affairs of the Nigerian Bar and moving it towards higher heights. She said the Learned Silk was not one to be introduced and that the gathering was not for formalities but was called together to harmonize efforts and cross-pollinate ideas towards achieving the betterment of the Nigerian Bar. She then urged all members and executives of the NBA Umuahia Branch to be steadfast in their support and unwavering as the times ahead would determine the future of the NBA.

In addressing all the attendees, the Learned Silk said that the event was not one to make long speeches but one to accord everyone an opportunity to familiarize with each other, exchange ideas and see how collective efforts can be made towards ensuring that the Nigerian Bar Association culminates to its fullest potential and attain higher heights. He applauded the administration of the President, Mr. Olumide Akpata and commended the giant strides of the NBA under his tenure in office. The Learned Silk further mentioned that the good works of the President must be maintained and continued.

Thereafter, representatives from different factions of the Branch made comments, following which an interactive session ensued which was closed with a treat to a buffet.

As a spin off from the evening sit-out, the Learned Silk had a breakfast session with the members of the NBA Umuahia and Aba Branch the following morning before bidding them final farewells. Whilst addressing them, the Learned Silk reiterated the need for consistency in commitment to the improvement of the legal profession in Nigeria. He talked on the need for adherence to the Constitution of the NBA and the Nigerian Constitution in the discharge of official duties and urged the Young Lawyers to imbibe and conform to the etiquettes and tenents of the profession even in their career pursuits.

He thanked all the attendees and the the Vice Chairman of the Young Lawyers’Forum, Umuahia gave the closing remarks.