On March 29, 2021 the public was treated to a bizarre tragi-comedy through a viral video clip where a high-ranking jurist and Chairman of the influential Code of Conduct Tribunal (CCT), Mr. Danladi Yakubu Umar unleashed a slap on a hapless security guard at the popular Banex Plaza in Wuse, Abuja.

The victim, one Clement Sargwak, a 22-year-old employee of Jul Reliable Guards Services Limited posted as a security guard to the plaza, recounts the vicious and inglorious assault thus: “After I informed him (Mr. Umar) about his wrong parking, he came out and slapped me, when he slapped me the driver also came down and slapped me and they tore my uniform and they stepped over me severally.

“…. When the man arrived with the security men, the Oga (Mr. Umar) slapped me again in front of the police and ordered a police officer to also slap me, which he did and thereafter ordered me to kneel down and I obeyed. As I went on my knees, the Oga (Mr. Umar) also kicked me in my face and hit my mouth.” Mr. Sargwak has a clearly bruised lip to show for the physical assault on him by Mr. Umar.

Mr. Samuel Ihensekhien, a solicitor for BANEX Plaza, alleges that “It was brought to my attention that on March 29, Mr. Sargwak was assaulted and harmed and was on the verge of almost being killed by Mr. Danladi Umar. And he was subsequently taken to the Maitama Police Station….

”They (the police) were very surprised, and the DPO saw the footage and immediately ordered he (Sargwak) be released on bail forthwith. He was then handed to the Banex manager and from there he was taken for medication.”

The unprecedented spectacle has expectedly caught the attention of a global audience and especially the legal community.

In a feeble and ill-advised attempt to exonerate himself from the macabre incident, Mr. Umar states that he “was accosted by the Plaza guard in a very rude manner on arriving there (plaza),” adding that he “was drawn into an unnecessary altercation and subsequently assaulted, with this degenerating into an attack and injury by a mob that was chanting secessionist and sectional slogans.”

Instructively, the much lampooned press statement by CCT’s Head, Press & Public Relations, Mr. Ibraheem Al-Hassan, also made reference to the alleged “mob” which he described as “consisting of BIAFRAN boys.” Mr. Al-Hassan would later admit that it was Mr. Umar who directed him to weave the “BIAFRAN boys” spin into the macabre tale. What is more, the statement went ahead to conclude that sympathy in such circumstances usually goes to the “low personalities.” Yet in a fleeting sombre moment, the CCT admits that the incident “ought not to have happened.”

Mr. Umar claims he has reflected on the incident, adding that “the entire incident was avoidable” and that “I regret being drawn into responding to the situation.” However, perhaps torn between ego and genuine remorse, Mr. Umar curiously feels “upset” and even “highly disappointed” that his action has been “misconstrued” in the narrative trending on social media!

The “Code of Conduct for Judicial Officers 2016” as issued by the National Judicial Council (NJC) states in Rule 1 (1.1) that “Propriety and the appearance of propriety, both professional and personal, are essential elements of a Judge’s life,” noting that “members of the public expect a high standard of conduct from a Judge.” When in doubt, a judge should ask the question: “How might this look in the eyes of the public?” The National Judicial Council directs in Rule Four 4(ii)(b) directs that “bad behaviour, whether in or out of Court” is a necessary disqualifying factor.

Notwithstanding the controversies that have trailed the recent recruitment of Court of Appeal judges, it is safe to conclude that the NJC would not have recommended a street-brawling jurist-turned-pugilist for appointment as a judge of the all-important Code of Conduct Tribunal. Perhaps the ultimate irony is that Mr. Umar superintends an entity that stands as a sentinel for good conduct among public officers. And to think that Mr. Umar has been the Acting Chairman or Chairman of CCT for more than 14 years!

It was in this exalted role that he sat in judgement on former Chief Justice of Nigeria, Justice Walter Onnoghen. He was unsparing, at all times projecting himself as an epitome of good conduct and morality. Perhaps with hindsight, he was rather combative in dealing with the counsel that appeared before the tribunal.

What is more, in finding Justice Onnoghen guilty of non-declaration of assets, Mr. Umar based the tribunal’s judgement on the “admission by the defendant in his own handwriting ….,” adjudging same as “a partial confession.” He further held that “hard facts” had been adduced by the prosecution to establish its case. There is no gainsaying that aside from Mr. Umar’s admission of “being drawn into responding to the situation,” the “hard facts” in the public domain compel a guilty verdict against him.

It is recalled that Mr. Umar was on February 2, 2018 slammed with a two-count charge of corruption by the Economic and Financial Crimes Commission for alleged receipt of N10,000,000.00 (Ten Million Naira) bribe from one Rasheed Owolabi Taiwo, a former Deputy Comptroller General of the Nigeria Customs Service sometime in 2012 for a favour to be afterwards shown to him in relation to a pending Charge (No. CCT/ABJ/03/12) and contrary to Section 12(1)(a) & (b) of the Corrupt Practices and Other Related Offences Act, 2003. The charges were however dropped.

We strongly deprecate the ethnic slurs prevalent in the statement authorized by Mr. Umar which border on xenophobia, contrary to section 26 of the Cybercrimes Act 2015 and punishable with 5 years imprisonment and/or a minimum N10 million fine. Also, to classify some Nigerians as “low personalities” is just as appalling and unacceptable. It raises the poser whether these categories of persons can ever obtain justice in Mr. Umar’s court.

It is apparent that the only ‘offence’ committed by the security guard is that, in the words of Mr. Umar, “I was accosted by the Plaza guard in a very rude manner on arriving there.” For a jurist who was acclaimed in the CCT’s statement to have frequented the Plaza for about 18 years, he must be aware of the presence of police operatives on the premises. That he opted to literally take matters into his own hands instead of order the arrest of the security guard to answer to any misfeasance is highly inappropriate and condemnable. It does grave injustice to the NJC’s Code of Conduct which especially admonishes propriety in all circumstances. Clearly, Mr. Umar performs adjudicatory and quasi-judicial functions. It is therefore immaterial that Mr. Umar is answerable to Nigeria’s President, and may only be removed by him upon endorsement by the National Assembly.

Mr. Umar has brought palpable odium to his high office. We call on Mr. Umar to immediately resign from office. It is the only path of honour to redeem whatever is left of his honour. In the event that he fails or refuses to do so, President Muhammadu Buhari should promptly activate the process for his removal by transmitting a letter to that effect to the National Assembly.

We commend the Nigerian Bar Association (NBA) for its resolve to prosecute Mr. Umar at the Legal Practitioners Disciplinary Committee (LPDC) if a prima facie case is established against him, and urge the lawyers’ association not to relent in this regard.

Finally, we urge the Nigeria Police to thoroughly investigate the incident – including the xenophobic slurs – with a view to bring any culprit to justice and ensure closure especially for Citizen Sargwak. 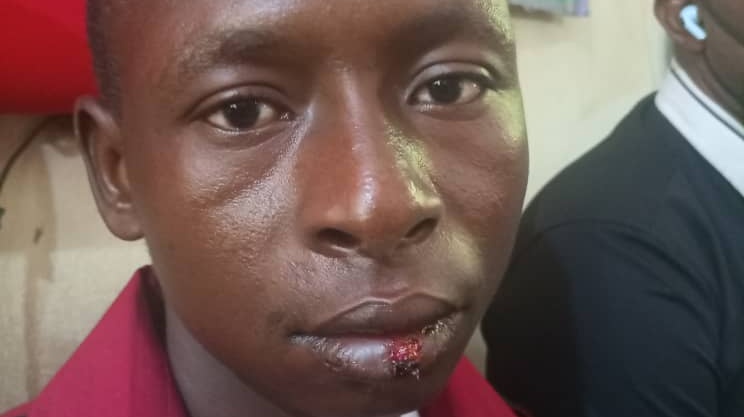