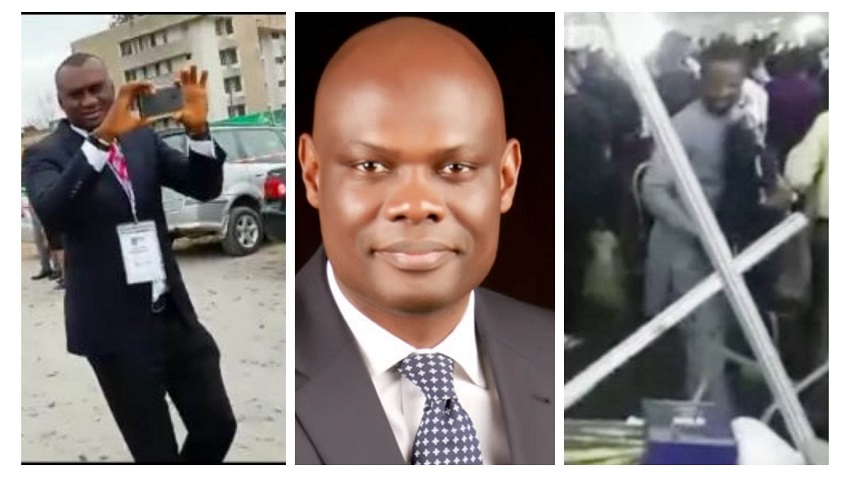 The Chairman of the Nigerian Bar Association (NBA) Conference Incident Investigation Committee, Mr. Olawale Fapohunda SAN has disowned reports that the lawyers whose pictures have been trending are the “vandals” who ransacked and looted materials during the recent NBA Annual General Conference (AGC).

According to a post by one of the lawyers, Mr. Godwin Madubuegwu, Fapohunda informed him during a telephone call that the reports took the committee’s report out of context, saying that the committee merely wanted to hear from the lawyers towards unravelling the real culprits.

Goodevening, learned Silks, seniors and colleagues. My name is G. C. Madubuegwu Esq. I was called to Bar in 2011 and I’m a member of Enugu Bar (ENBAR) and an active bar man.

Precisely, on 15th December, 2022, around 11 p.m, I was going through Facebook only for me to see a report on (name withheld) blog concerning the unfortunate incident of vandalization at the last NBA AGC in Lagos. Particularly, the report was saying that the Incident Investigation Committee of the NBA had unravelled the identities of those behind the said incident of vandalization. The author of the report then went ahead and posted some pictures and tagged the persons in the pictures the “vandals”.

I went through the said pictures; lo and behold, I saw a picture of me among the pictures supposedly released by the Committee. (i.e, the pic by the left in this post). I was perplexed at seeing my picture as one of the vandals! Instructively, the picture posted in the said report was self-explanatory as one could see in the picture that I was merely covering some happening with my phone when the CCTV camera picked my image.

As if that was not enough, I saw another online report this morning where my said picture and other pictures were posted and members of the public were asked to assist in identifying the persons in the pictures.

For the past two days, I have been overwhelmed with calls and messages from friends and acquaintances alike, expressing their shock at seeing my picture being linked with the said unfortunate incident at the last NBA AGC. Some of them advised that I should please lie low and not take any steps to expose myself lest I be made to face the LPDC, even when I explained to them that I had nothing to do with the said vandalization, they still insisted that I should tread cautiously and just lie low. My loving wife was also traumatized when I broached the news to her (By the way, I just got married a couple of weeks ago😃😃😃). I really appreciate the concern shown by all as well as their admonitions; whether these admonitions are wise or otherwise, is really not as important as the fact that they were borne out of genuine concern for me. I remain most grateful.

Being innocent of this unsavory and very distasteful association of my name and person with that very shameful incident at the last NBA AGC, with the much cherished help of Mr. Emeka Nwadioke, the President of City Lawyer Magazine, I took immediate steps to reach out to the chair of the Committee, in the person of the Honorable the Attorney-General of Ekiti State, Mr. Olawale Fapohunda (S.A.N) to establish my innocence.

He said that the reports in the media took the statement of the Committee out of context and that no one has been accused of any act of vandalism. In fact, the learned Silk said that in my own case, they saw that I was covering something with my phone, and that they picked me so as to know what I recorded, and if same would be helpful in ascertaining what really transpired. In the end, he told me that the Committee would invite us at the appropriate time to interact with us. With this, we ended our conversation.

Please, I am making this post to set the records straight. I never participated in any act of vandalism or even protest during the last NBA AGC in Lagos, without prejudice to the fact that it is within the civic right of aggrieved persons to protest within the confines of the law. I was only videoing the protesters with my phone when the CCTV camera picked my image and my said picture posted online clearly shows this fact.

I wish to thank the ever amiable Honorable the Attorney-General of Ekiti State, the Chair of the Incident Investigation Committee of the NBA for the opportunity given to me so far to state my own side of the story, even as I assured him that I would always make myself available whenever needed for further clarifications on the matter. May God bless him.

I thank my loving wife, Esther Chioma Emmanuel for her staunch support to me during this trying period. I also wish to thank my good friends and colleagues from different parts of the country who have been calling and sending messages to sympathize with me and as well offer their advice, may God bless them all. May God bless us, all.