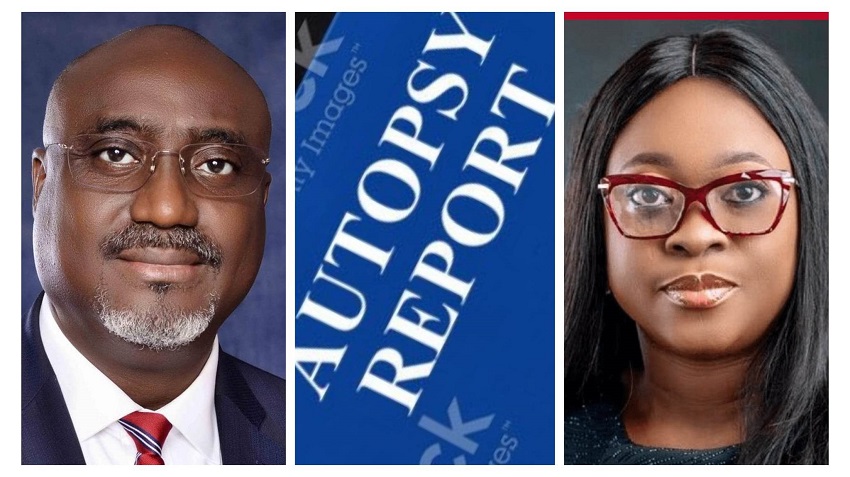 The burial of Lagos lawyer Bolanle Raheem has been stalled due to the demand by the Nigerian Bar Association (NBA) for the autopsy report by the medical team.

While the Wake Keep was earlier scheduled to hold at 4 pm today at The Redeemed Christian Church of God (RCCG), Olive Tree Parish, Ikoyi, Burial Service was slated to hold tomorrow at 10 am at the same venue.

But CITY LAWYER gathered from multiple and unimpeachable sources that the plans have been put off due to NBA’s insistence that it must review the autopsy report. It was also gathered that the lawyers’ association is demanding a copy of the ballistic report from the police high command. The autopsy report is expected latest tomorrow.

A ranking NBA source told CITY LAWYER yesterday that “the demand is to avoid a repeat of the Gafaru Buraimoh case where the body may have to be exhumed for an autopsy. We have the mandate of the family to represent their interest in this matter. We have to be satisfied with the autopsy report and its ability to support a water-tight case. We cannot afford to be taken unawares.”

The NBA had in a press statement noted that “The NBA was represented at the post mortem examination carried out on our late member, Mrs. Omobolanle Raheem at the Lagos State University Teaching Hospital on 30/12/2022. A preliminary report of the exercise is expected today, 31/12/2022. The NBA hopes that the report shall further aid the process of prosecution.”

But a source who was at the Lagos State University Teaching Hospital (LASUTH) during the autopsy session told CITY LAWYER that NBA’s team was not allowed to witness the autopsy procedure on the ground that they were not pathologists.

Sources told CITY LAWYER that the NBA does not want to be foisted with a fait accompli, moreso as the deceased is yet to be buried.

CITY LAWYER gathered that the postponement is also expected to offer a window for NBA to participate actively in the funeral rites of the deceased.

Meanwhile, NBA President Yakubu Maikyau SAN has visited the family of the deceased to commiserate with them. Leading a team of NBA National Officers among others, Maikyau also visited the Assistant Inspector General of Police in-charge of Zone 2 Command, Onikan, Bode Adeyinka Adeleke; Lagos State Commissioner of Police Abiodun Alabi, and Lagos State Attorney-General and Commissioner for Justice, Mr. Moyosore Onigbanjo SAN to emphasize the need for speedy prosecution of the matter and for the police to stem extra-judicial killings.

Press statements made available to CITY LAWYER by NBA spokesman Habeeb Lawal stated that the officials assured Maikyau that they would leave no stone unturned in prosecuting the matter and overhauling the policing system.

It is recalled that Bolanle was allegedly shot and killed by ASP Drambi Vandi on Christmas Day while returning from church service and Christmas outing with her family. The officer has been charged with murder and remanded at Ikoyi Correctional Centre.