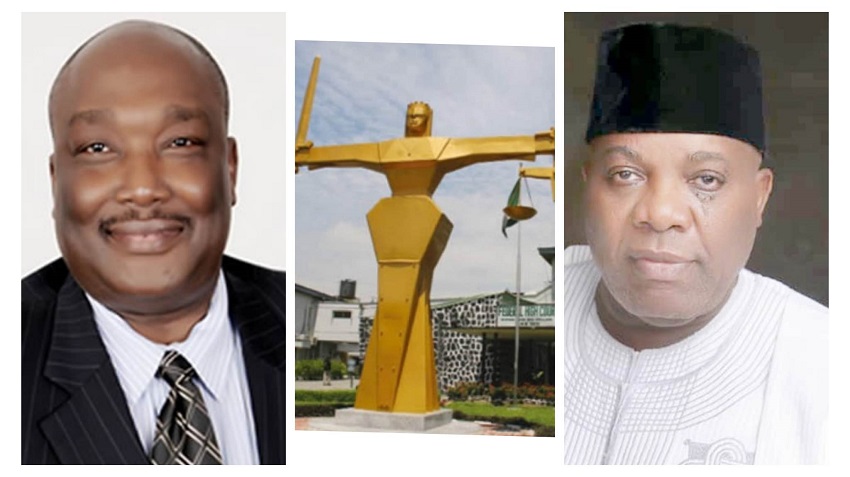 ‘OKUPE IS NOT AN EX-CONVICT,’ SAYS EX NBA PRESIDENT

Former Nigerian Bar Association President and criminal trial lawyer, MR. JOSEPH DAUDU SAN has declared that erstwhile Labour Party Director-General, Dr. Doyin Okupe is not an ex-convict, arguing that the embattled party chieftain has not been found guilty of fraud or corruption.

He (Chief Okupe) is not an ex-convict in any sense at all. What makes a person an ex-convict in the legal sense is if he is convicted for an offence in respect of dishonesty and or fraud and was sentenced to a term of imprisonment of not less than 6 months. Then he will be disqualified from holding public office, although I must concede that had he been convicted for corruption or fraud, his continued participation in the Peter Obi campaign machine would have cast a poor shadow on the objectives of the Obidient mission.

But his decision to resign was personal on his part from what I decipher from his resignation letter. As he said, their opponents would have used his travails to score cheap political points and in the process traduce the altruistic objectives of the movement.

Now returning to the nature of the conviction, it must be noted that he was discharged on counts 1-33, which relate to fraud and corruption, and had he been convicted for just one of the counts would have put a completely different complexion on the matter.

What he was convicted for are not issues bordering on fraud, defalcation or corruption. He was merely convicted for accepting cash and expending same, which cash could not be said to have originated from a financial institution. Whatever the threshold is, the Judge held rightly or wrongly that Mens Res (guilty intent) was not required as an ingredient of the offence, it being one of strict liability – meaning if I send my secretary to the market with N2, 000, 010: 00, just marginally above N2M which the law permits, and I cannot trace the provenance of the money to a financial institution, then he or she is most likely going to jail for just carrying out my instructions.

Assuming that the authorities are out to get me and are unable to but having pounced on my agent, was the intention of the law for him or her to be a criminal for merely carrying out legal and legitimate instructions from me? I do not think so.

Furthermore, the category of offences which spending cash above statutory thresholds belong are not felonies but mere regulatory financial misdemeanors. No one in the eyes of the law bags the label of an ex-convict for such conviction. It has the same effect as if such a person is convicted for a traffic offence, health condition breaches, failing to fill some forms at the air or seaport etc. They carry with it no stigma of a thief or ex-convict as some Nigerians have been wallowing in since news of the conviction broke.

Like I said, he resigned for the reasons stated above and not because he, Okupe was morally or legally impeded from continuing as Peter Obi’s chief campaign manager. Cynically on my part, I think he (Okupe) jumped off the Obi moribund bus or sinking ship on time – and fortuitously too – because as an experienced politician he must have known that the Project was doomed to failure for a variety of reasons not relevant here. That will DV be for another day.

Finally, it remains to condemn the public lynching of people who pass through the judicial branch’s crucible of due process. An appeal is presently pending against the said conviction, which in the real sense is stingless and certainly not evidence of corruption or fraudulent conduct.

The point I am making is that had the conviction been for murder or corruption or other vicious crime, is this how we would have engaged in the condemnation and lynching of the person involved. The Nigerian factor makes it impossible for the justice system to achieve the objective of penal punishment which in the main is reformatory and not retributive. That is why of recent ‘Prisons’ were renamed ‘correctional centres’ to remedy the stigma those who pass through such institutions are going through. They are meant to emerge from there as better citizens but not in Nigeria because having been classified as ‘elewon’ by the teaming population and of recent the social media Lynch mob, such a person is doomed forever. He cannot find work, cannot marry from a responsible family, cannot take a stroll or go shopping, cannot appear in public etc, which is why most of them before graduating from the correctional facility, knowing that there is no hope outside for them now take a lifetime membership in the criminal fraternity, thereby negating the intendment of the law.

In my humble view, it now makes no difference in Nigeria if you are merely convicted, fined and you avoid jail time for mere regulatory misdemeanors. You are foolishly branded an ex-convict and ostracized from mainstream society. I am sure Chief Okupe’s place on the High Tables at social events will now be severely circumscribed. No more parties for him, may be, until after his Appeal. That is not how it should be. Every Nigerian who has passed through the criminal justice system and has paid his dues must be reintegrated into the society and allowed to live a normal life including plying his former trade or the new one he learnt in ‘prison’. If not, the human rights of these persons are severely curtailed when the contrary happens.