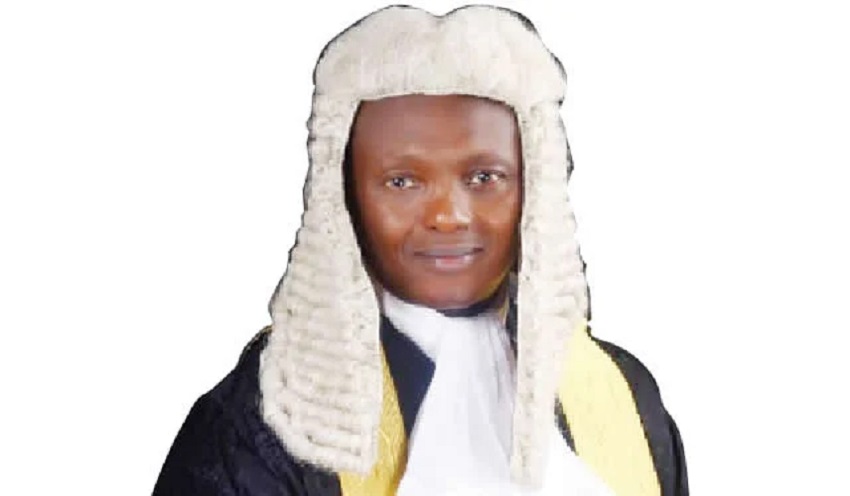 The Human Rights Institute of the Nigerian Bar Association (NBA-HRI) has challenged President Mohammadu Buhari to tackle the insecurity ravaging the country by rejigging his team.

In a statement made available to CITY LAWYER following its First Human Rights Summit held at the NBA House, Abuja on July 15, 2022, NBA urged Buhari to “recalibrate his team and find immediate solution to the insecurity situation, which is one of the promises he made to Nigerians for his election.”

The summit noted that Buhari’s primary constitutional responsibility as President and Commander in Chief of the Armed Forces is security of lives and property and warned that if the president failed to resolve the crises of insecurity in the country, “then history will reckon that he has failed the Nigerian people.”

The summit, attended in-person and virtually by over 450 lawyers from across the country, recounted that every part of Nigeria is currently experiencing massive attacks by terrorists, bandits, kidnappers and other criminal gangs, and the law enforcement agencies appear overwhelmed and helpless as only very few of the perpetrators are arrested and prosecuted.

According to the statement, “The summit was worried that the Correctional Service Center(prison) in Kuje, Abuja, was attacked by armed men for almost three hours, at the end of which over 600 prisoners, including terrorist suspects, were forcefully released. Before then, the country was shocked by terrorist attack on worshippers in a church in Owo, Ondo State, in which over 35 people were massacred. Similar fatal attacks had, within the past few weeks, occurred in Kaduna and other parts of the country.

“The summit also recalled that it is now over seven years that the Chibok school girls were abducted from their school by Boko Haram terrorists, and many of them are yet to be returned. Survivors of numerous abductions and kidnappings across the country pay millions of naira in ransom to secure their release, and most are killed or still remain in captivity, including hundreds of passengers kidnapped on the Kaduna-Abuja train, are yet to be released after over one hundred days of the attack.

“The summit noted that under section 14(2)(b) of the Constitution of the Federal Republic of Nigeria 1999, the security and welfare of the citizens is the primary purpose of government. The responsibility of the government is therefore to protect the citizens from violations of their rights including the right to life.

“President Buhari, as the commander-in-chief of the armed forces, has the primary responsibility to ensure that this constitutional obligation of his government is carried out. Where he fails to do so, as it seems at the moment, then there is a failure of governance.

“Nigerians now live in terrifying fear of their lives. On daily basis, there are news of unlawful killings across the country. Despite huge sums of money spent on security and law enforcement, including huge military spending and billions of Naira as security votes by state governors, there are little or no results in tackling criminals and terrorists, and safeguarding the lives and properties of the citizens. The country continues to be unsafe and insecure, and the insecurity situation deteriorates.

“The Summit was also concerned that without a secured polity, Nigeria will be unable to successfully and peacefully conduct the forthcoming general elections in 2023. The insecurity situation is therefore a huge threat to Nigeria’s democracy, and portends great danger to the future of the Nigerian State and its governance. “How can elections be held in 2023 when every part of the country is unsafe’ said one participant at the Summit.

“The summit concluded that the President must recalibrate his team and find immediate solution to the insecurity situation, which is one of the promises he made to Nigerians for his election. If he fails to do so, then history will reckon that he has failed the Nigerian people.” 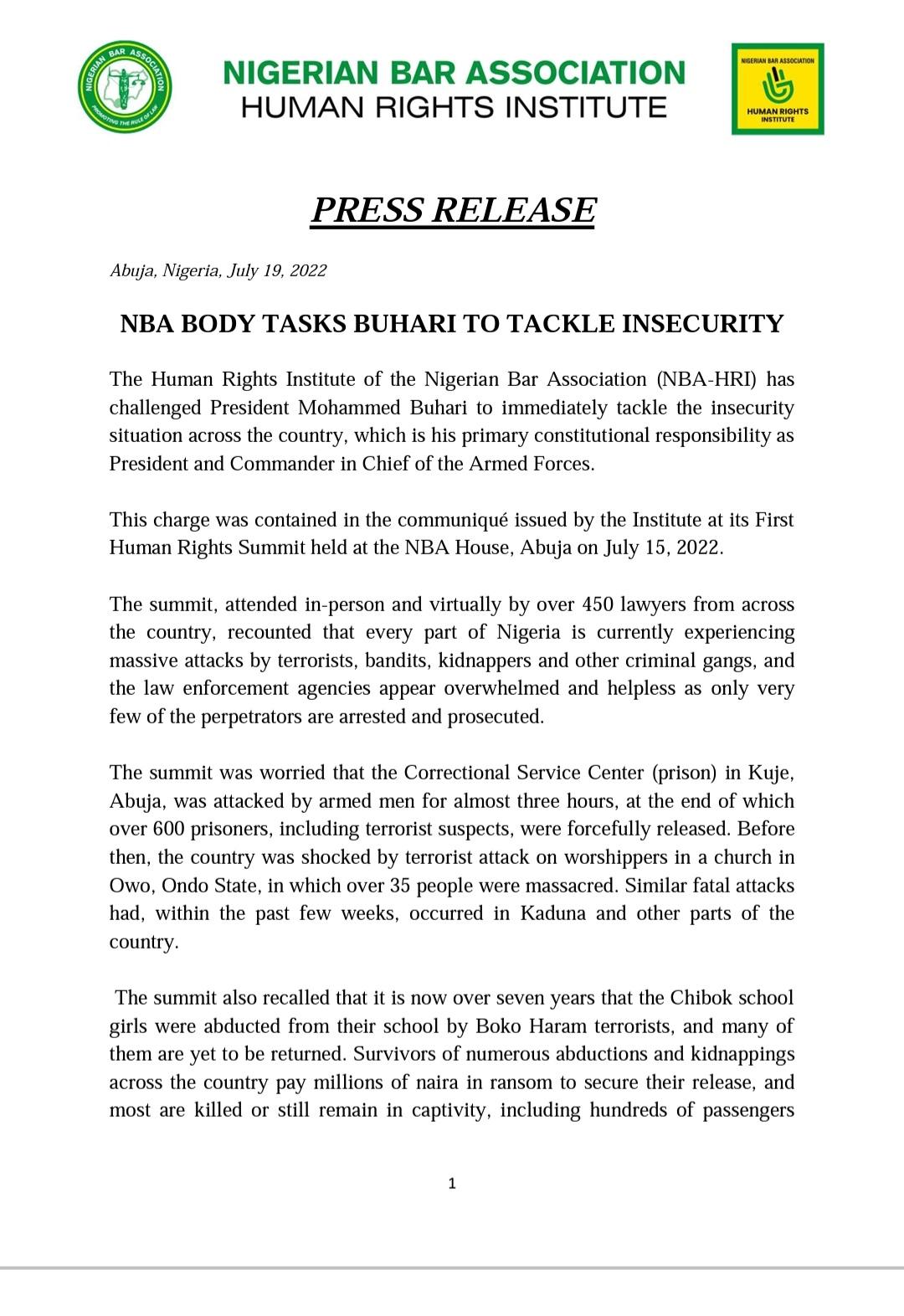 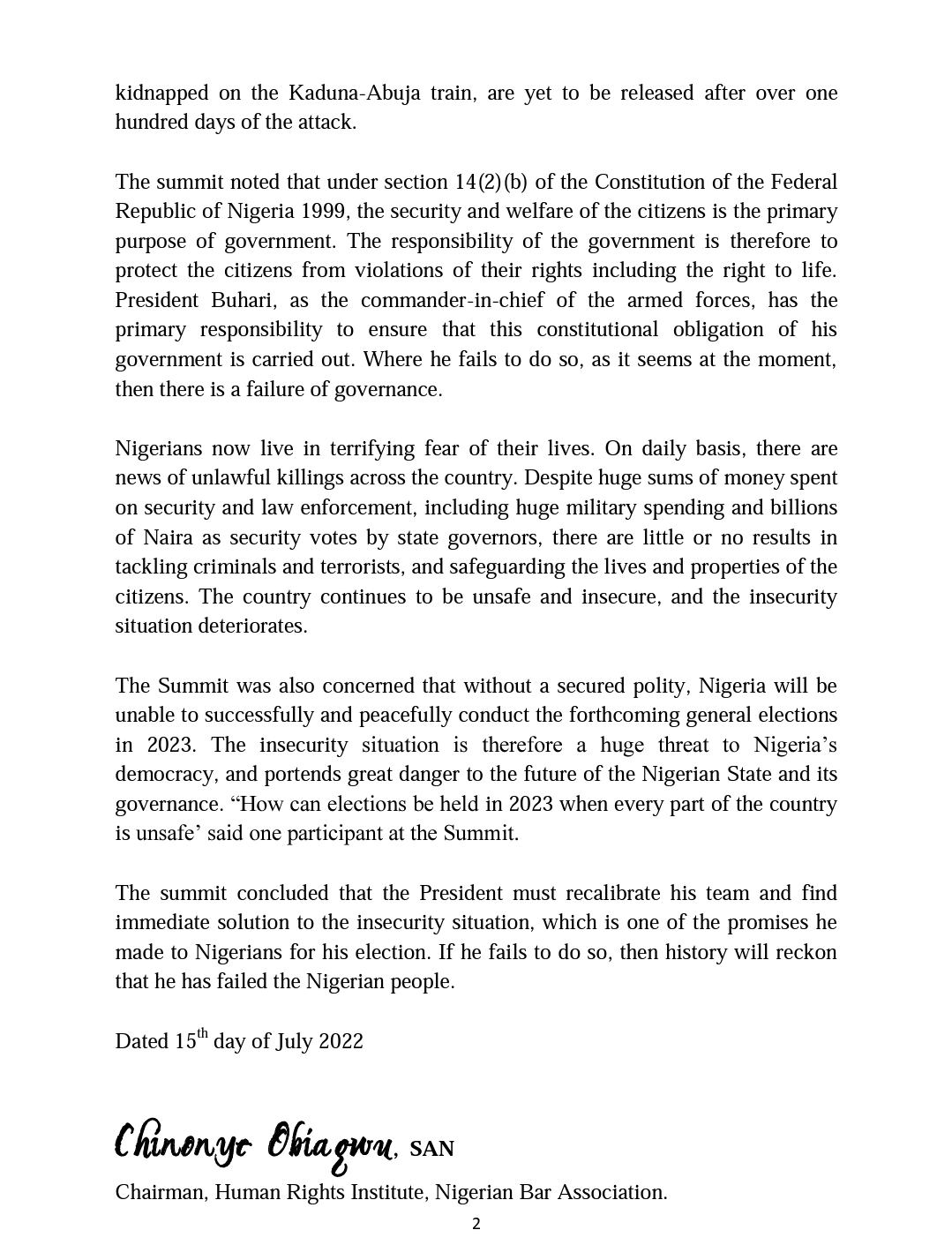